5 Quarterbacks Who Will Reap the Benefits from the NFL Draft

With the 2015 NFL draft complete and in the books, several players will be either positively or be negatively impacted by certain choices made during the draft.

Here are five quarterbacks who should reap the benefits from the decisions made by their front offices.

Carr put up some respectable stats during his rookie campaign, tallying 3,270 passing yards, 21 touchdowns and 12 interceptions. This came despite the team’s overall lack of wide receiving talent. Additionally, Carr helped lead the Raiders to three wins in 2014. This may not sound like much, but it was a start for a team that had not won a game since November 17, 2013 prior to defeating the Kansas City Chiefs in Week 12.

Carr will now team up with a shiny new receiving option in the form first-round pick Amari Cooper this season. The Alabama product put up 1,727 yards and 16 scores for the Tide last year. Selected No. 4 overall, Cooper was the consensus top receiver in the draft. Look for Cooper to be a tremendous asset for Carr before eventually evolving into the quarterback’s primary receiving target.

Adding icing to the cake, the Raiders selected tight end in Miami’s Clive Walford in the third round. The big-bodied former Hurricane should provide a solid target between the hashes.

The Redskins chose not to draft another quarterback as additional competition for RGIII heading into the 2015 campaign. With only Colt McCoy and Kirk Cousins in the picture, Griffin should be a sure-fire starter come opening day.

Another smart move was snagging former Iowa offensive tackle Brandon Scherff from Iowa. Scherff will start out of the gate opposite franchise tackle Trent Williams. The increased protection should help RGIII, who struggles when faced with pressure.

Courtesy of USA Today Sports: If Smith wins the starting gig, he’ll have the weapons.

Smith should be breathing a sigh of relief after finding out that the Jets didn’t trade up for Marcus Mariota in last week’s draft. In fact, the Jets chose to use their second-round pick on Ohio State wide receiver Devin Smith, who will provide a solid down-field target. Smith finished his last year in Columbus by tallying 931 receiving yards and 12 touchdowns. It’s also noteworthy that Smith managed an amazing 28.2 yards per catch in 2014.

The Jets waited until the fourth round and drafted Baylor’s Bryce Petty, who the team claims it has no intention of starting anytime soon. For now, if Smith can work on cleaning up some sloppy habits from his first two seasons, he should have a solid shot at starting. This is provided that he is not outplayed by veteran quarterback Ryan Fitzpatrick over the summer.

The Bears were not able to pull any rabbits out of their hats by sending Cutler to the Tennessee Titans in a package for Mariota. In fact, the Bears passed up other opportunities to select a quarterback in the mid-rounds.

As it stands, the Bears actually provided Cutler with a top-end wide receiver prospect in former Wast Virginia standout Kevin White, who put up 1,447 yards and 10 touchdowns in 2014. He’ll make a suitable replacement for Brandon Marshall and give Cutler some hope moving into the 2015 regular season. 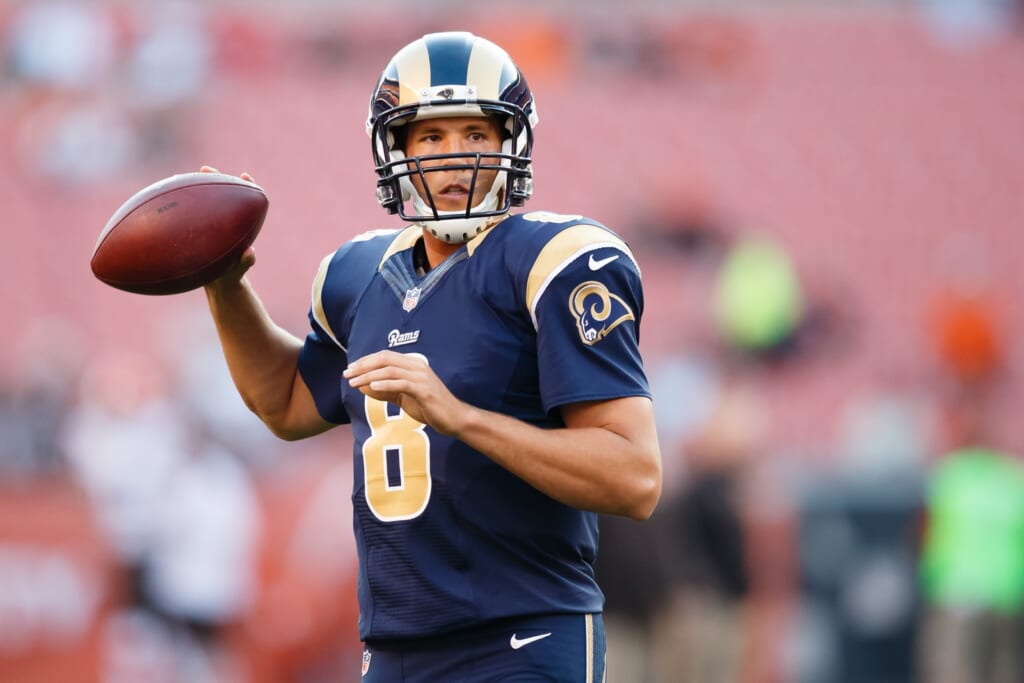 Courtesy of USA Today Sports: Barring a set back, Bradford will likely be the Rams Week 1 starter.

Bradford has been under consistent trade speculation since the Eagles acquired him from the Philadelphia Eagles back in March. All the while, head coach Chip Kelly talked out of both sides of his mouth, pledging his loyalty to Bradford one day, then the next proclaiming how much he loved Mariota.

Last-minute reports revealed that Kelly attempted to trade with not only the Titans, but the Buccaneers to acquire his former pupil at Oregon. Kelly has since denied those rumors.

In the end, Bradford is in Philadelphia and looks to be the front runner in a quarterback competition that includes Mark Sanchez and potentially Tim Tebow. He also got a young weapon in the form of former USC wide receiver Nelson Agholor in the first round of last week’s draft.