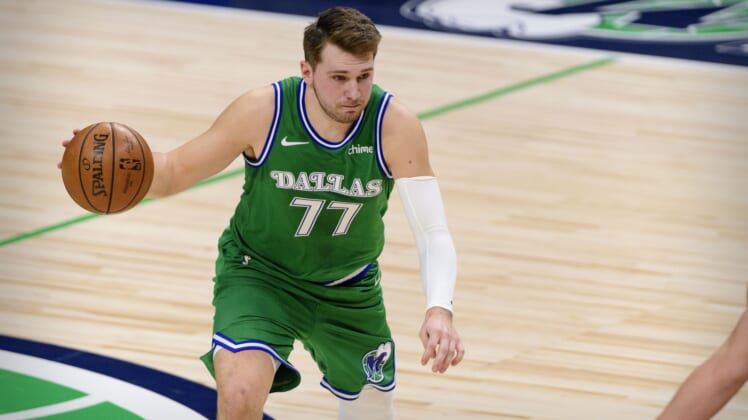 Despite the Dallas Mavericks slow start to the season, Luka Doncic has lived up to his billing as the preseason MVP favorite.

However, with the Mavericks’ mediocre record and stellar performances from Joel Embiid, LeBron James, and Nikola Jokic, the Slovenian superstar has plenty of competition for the NBA’s highest individual honor.

If Doncic can improve in the following five areas, he still has enough time to make up ground and be named MVP.

After improving his scoring average by seven points in his sophomore season, Doncic is still getting better. He’s improved his field goal percentage, and free throw percentage. At 28.8 points per game, Doncic is the fifth highest scorer in the league, behind Stephen Curry, Damian Lillard, Embiid, and Bradley Beal.

Other than Beal, the other three are some of Doncic’s biggest rivals for MVP. If he can get up to 30 points per game — making him virtually even with Embiid, Lillard, and Curry — Doncic will have a distinct advantage at the end of the season.

Luka Doncic’s offensive prowess has never been in question. However, he’s shown massive improvements on the defensive side. After just 27 games, Doncic already has more blocks than all of last season.

His ability to defend one-on-one has been noticeably better, too. Last season, Doncic was in the 31.6 percentile of ISO defenders, nearly the bottom third of defenders. Doncic has improved his anticipation and strength, moving up to the 64.2 percentile. In comparison, LeBron James is in the same percentile and Curry is in the 23.1 percentile.

Some MVP voters won’t cast their ballot for a defensive liability. With his clear increased effort in this area, defense shouldn’t hurt Doncic’s case.

After starting the season bricking 26 of his first 31 attempts from 3-point range, Doncic has bounced back to post a career-high percentage from beyond the arc to date.

Doncic has been particularly great in February, sinking 41.2% of his downtown shots on 7.6 attempts per contest. If this sustained hot streak can continue, there’s no telling how high Doncic could go.

While he’ll never shoot at the same rate as Curry or Lillard, Doncic could potentially get up to 37%. Already at a personal best and with no telling where his ceiling as a player really is, any progress helps Doncic’s MVP case.

By contrast, reigning back-to-back MVP Giannis Antetokounmpo is still struggling to get it done as a 3-point shooter, hitting only 28% of his attempts as of this writing.

Luka Doncic must continue to rally Dallas Mavericks to playoffs

The only reason Luka Doncic is not the frontrunner for MVP is the Dallas Mavericks’ lack of wins. Fair or not, team wins are often the deciding factor between two outstanding players. If the season ended today, the Mavericks would have less wins than every other MVP candidate’s team.

To be fair, Dallas had awful luck with the league’s health and safety protocols and went on a six-game losing streak during that stretch.

Since then, however, they’ve got all their players back and have won six of their last eight games. With the Mavs trending up, they should finish in the same area as the Warriors, Nuggets, and Trail Blazers. Of the MVP candidates, only James and Embiid should have significantly more wins. Even then, if Dallas finishes as the four seed, many voters will rightly credit Doncic as the catalyst for the turnaround.

Only two players in NBA history have averaged a triple double: Oscar Robertson and Russell Westbrook, who has done it three times. Westbrook won an MVP the first time he accomplished this feat, averaging 31.6 points to go along with 10.7 rebounds and 10.4 assists.

During the next two triple-double seasons, though, Westbrook averaged significantly less than 30 points and did not win MVP.

If Doncic can average a 30-point triple-double, he will be the MVP. At 28.8 points, 8.6 rebounds, and 9.3 assists, he’s the only player in the NBA that’s within striking distance of those marks. Raising those point and assist totals a little more isn’t too much of a stretch. Where the prodigy may have most trouble is adding the 1.4 rebounds per game required.

But with the Mavericks’ rebounding woes, Doncic will have plenty of opportunities.

While some prognosticators have already counted Doncic out in the MVP debate, there is a lot of basketball to be played. Don’t be surprised if the Dallas star ends up proving the bookies’ preseason forecast to be right.