No matter what happens in their regular-season finale against the Philadelphia Eagles, or even in the playoffs, this season has been a success for the New York Giants.

Few outside the organization believed that this team could make the postseason with a rookie head coach after enduring five consecutive double-digit losing seasons. But Brian Daboll took command and pushed all of the right buttons in 2022-2023, and as a result, the Giants are heading to the playoffs, and he’s a favorite to win “Coach of the Year” honors.

New York will play in the Wild Card round next weekend against either the Minnesota Vikings or San Francisco 49ers. While they will surely be underdogs in those matchups, the Giants have proven their doubters wrong all season and could do it again next weekend.

Related: Daniel Jones’ Week 17 performance will force Giants to pay him in the offseason

If Big Blue is going to have a long playoff run, their hopes will hinge on the performances of certain players. With that in mind, here are five players that will make or break the New York Giants’ run in the 2023 NFL playoffs.

The turnaround that Daniel Jones has made in his fourth season has been remarkable. The quarterback once referred to as a turnover machine, has thrown 15 touchdowns this season with just five interceptions through the 16 games.

He’s also set a career-high in completion percentage (67.2%), rushing yards (708), and rushing touchdowns. He’s without a doubt the NFL’s most improved player, but now the question is can he deliver and lead the franchise to their first playoff win since Super Bowl XLVI?

As it stands right now, New York Giants would play Minnesota next weekend, a team that Jones torched in Week 16 throwing for 342 yards while completing 30 out of 42 passes. If he can repeat his performance from a few weeks ago, not only will the Giants advance to the Divisional Round, but Jones will for sure be rewarded with a new lucrative contract in the offseason.

While Jones is the team’s most important player, there’s no denying that Saquon Barkley is their best player. For the first time since his rookie season, he’s been healthy and set a career-high in rushing yards with 1,312.

At times during the first half of the season, there were times where Barkley carried the offense on his back. But his production has dipped in the second half of the season as defenses became more intent on stopping him. 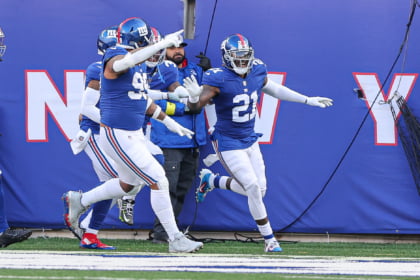 Through the first eight games of the season, Barkley was averaging 97.3 rushing yards per game and had three games where he had over 100 yards rushing. Since then he’s averaging 66.6 yards on the ground and only had one hundred-yard game during that span.

Barkley will likely sit for the regular season finale and then be energized and motivated to play in his first postseason game. If he can produce at the level he did in the first half of the season, New York Giants can make some noise in the playoffs.

In today’s NFL, if you’re going to make a deep run in the playoffs, you better have players that can go after opposing quarterbacks. Fortunately for the Giants, their fifth overall pick has started to come of age during the last few weeks of the season.

After registering one sack in his first nine games, Kayvon Thibodeaux has recorded a sack in three of the last four games and put on one of the best defensive performances of the season in Week 15 against the Commanders. In that game, he had 12 tackles and a strip sack of Taylor Heinicke that he recovered for a touchdown and was named NFC Defensive Player of the Week.

If Big Blue is going to advance in the playoffs, they’re going to need to make life miserable for either Vikings quarterback Kirk Cousins, or 49ers rookie Brock Purdy. If Thibodeaux can make a similar impact to the one he made against the Commanders, the New York Giants will move on to the next round.

Lawrence has been a model of consistency all season and was deservedly voted to the Pro Bowl last month. He’s third on the team in tackles with 68 and achieved a career-best in sacks with seven and a half.

His sack last week on Colts backup quarterback Sam Ehlinger, by throwing All-Pro guard Quenton Nelson to the ground, was one of the most impressive plays you’ll ever see a defender make.

Unfortunately as a unit, the New York Giants’ defense hasn’t played at the same level as Lawrence. The defense is giving up 359 yards per game which rank 25th in the league. Both the 49ers and Vikings have shown that they can be prolific offenses as they’ve scored 412 and 395 points respectively. As one of the captains, Lawrence will need to motivate his teammates and be a dominant presence on the defensive line in order to win. 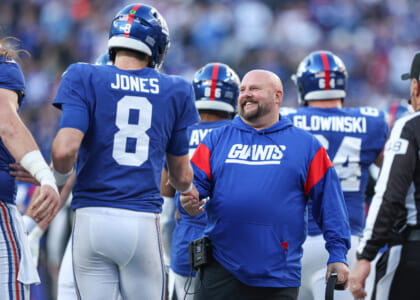 In addition to being in the playoffs for the first time in six seasons, the New York Giants are expected to have their top corner Adoree’ Jackson back for the postseason. Jackson sprained his knee in Week 11 against the Detroit Lions and hasn’t played since.

The return of their top corner couldn’t come at a better time. There’s a good chance they’ll have to face Viking superstar receiver Justin Jefferson, who had a field day against the Giants secondary in Week 16 when he had 12 receptions for 133 yards and a touchdown. If they don’t play the Vikings, then they’ll have to deal with the 49ers’ talented receiving core led by Deebo Samuel and Brandon Aiyuk.

With Jackson back, the team will like his chances no matter who he’s matched against, and this will allow defensive coordinator Wink Martindale to be more creative with his schemes.