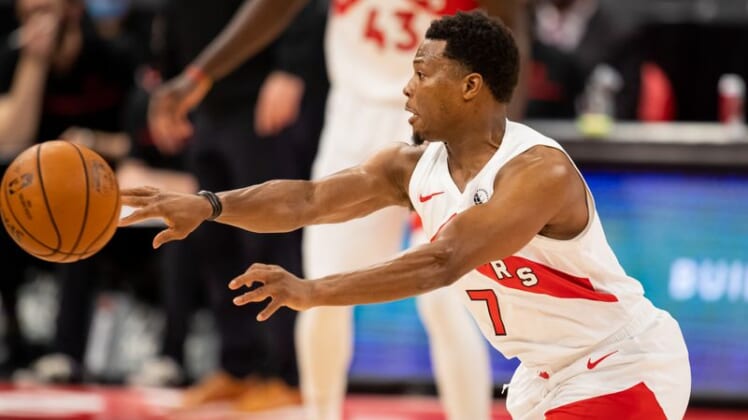 There’s now a good chance that a Kyle Lowry trade from the Toronto Raptors could happen ahead of the March 25 NBA trade deadline. Reports suggest that the two sides could be headed for a divorce.

If that’s the case, there’s a lot of contending teams who would show interest in the 34-year-old six-time All-Star. That includes a Los Angeles Clippers squad looking for an upgrade at point guard and a few contenders back east.

Below, we look at four ideal Kyle Lowry trade scenarios.

It stands to reason that Toronto would want proven players back in return for Lowry. Despite a 10-13 start to the season, there’s no indication that the Raptors are going into full-scale rebuild mode. That’s where the Clippers come into play as a legit contender for Lowry’s services.

The idea would be for Los Angeles to deal Marcus Morris and Patrick Beverley to the Raptors for Lowry. That would give Toronto a ton more depth and the help it needs in the frontcourt. In turn, the Clippers add a player that they have reportedly been targeting for a while. It’s also a position Los Angeles needs to upgrade after missing out on Derrick Rose. This just makes too much sense.

It’s the worst-kept secret in basketball. Boston ruing the day that it signed All-Star guard Kemba Walker ahead of the 2019-20 season. In fact, there was talk this past fall that the Celtics might move on from the veteran guard after just one season. Walker, 30, has been limited to nine games this season. There’s also some longstanding concerns over his knee.

In order for Boston to move Walker, it would have to send draft pick assets and a young player the other way. That’s where Lowry could come into play. Under this scenario, the Celtics trade young big man Robert Williams and two first-round picks to Toronto. The Raptors get a sixth man candidate in Walker while adding draft pick assets. Meanwhile, Boston retains its huge trade exception from the Gordon Hayward sign-and-trade with the Charlotte Hornets. It’s a win-win.

As with the Clippers, there’s a belief that Miami has been chasing after Lowry for some time now. A trade would certainly make sense in that it would enable Tyler Herro to move to a more traditional two-guard role after some consistency issues manning the point thus far this season. Jimmy Butler would then move to the three with veteran Goran Dragic playing the Sixth Man role.

As for the Raptors, they add sharpshooting guard Duncan Robinson to the mix as the centerpiece in this Kyle Lowry trade. That type of perimeter shooting ability is something that Toronto has been missing. Salary fillers such as Kelly Olynyk, Meyers Leonard and Maurice Harkless would have to be included, as would a future Heat first-round pick.

It’s being noted that the Pelicans are looking to move off either Lonzo Ball or Eric Bledsoe. The two point guard system is not working for general manager David Griffin. That’s where a potential Kyle Lowry trade can work out for the struggling Pelicans.

This scenario includes New Orleans moving Bledsoe and JJ Redick to the Pelicans for Lowry and Terence Davis. The Pelicans would also have to trade one of their many future first-round picks to Toronto in order to make this work. It’s a trade idea that should gain traction ahead of the March 25 deadline. That’s especially true given that New Orleans adds a traditional two-guard in Davis to the mix and can still get more draft pick compensation by moving Ball.