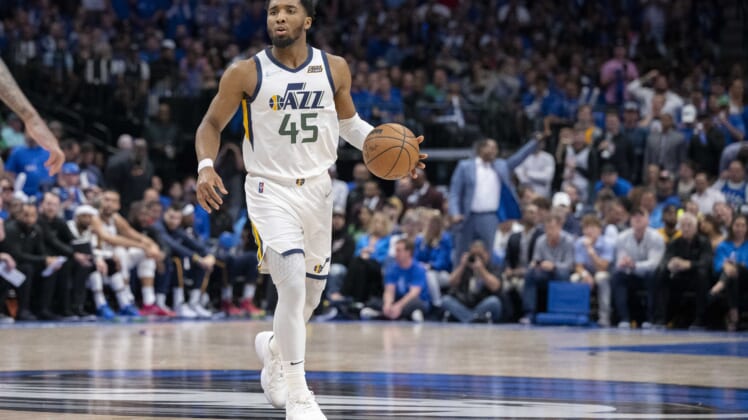 Donovan Mitchell and the Utah Jazz have hit another impasse. Losing in six games to the Dallas Mavericks in the first round of the Western Conference Playoffs, they enter an offseason of uncertainty. What’s Mitchell’s future with the program? Does Rudy Gobert get traded? Is head coach Quin Snyder returning?

As it concerns winning the West, Utah’s best bet is altering their roster around Mitchell. Coming up short against Dallas marks a sixth consecutive season that the Jazz have failed to advance to the Western Conference Finals with their deep-rooted core. Enough is enough: It’s time for the Jazz to make a bold trade.

Here are three players the Jazz should trade for to pair with Mitchell.

Utah is a defensive-minded team that’s efficient in halfcourt offensive sets. Regarding the latter, though, they need more scoring, specifically another player who poses a well-rounded scoring threat and can drop 20 points a night. Brogdon fits the bill.

Similar to Mitchell, Brogdon is more of a combo guard than a true one or two-guard. He’s an efficient outside shooter who gets points off the dribble, can serve as a primary ball-handler, defends well, and hits the boards at a plausible clip for a guard.

Brogdon and Mitchell would make for a compelling backcourt. They’re each respectable forces on both ends of the ball who generate offense on their own. Furthermore, Brogdon’s ability to stretch the floor would be a viable complement to Mitchell, who tends to get a lot of points attacking the basket. The Jazz remain a sturdy defensive team and improve in the scoring department by acquiring Brogdon. 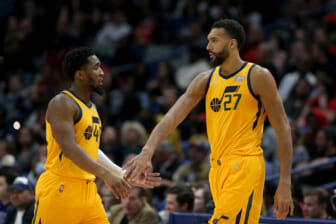 The Jazz can send the Indiana Pacers Alexander-Walker, a budding guard with the New Orleans Pelicans just four months ago, a young two-way guard in Butler, Bogdanovic and a pair of future draft picks. Indiana could reroute Bogdanovic for a late first-rounder in the 2022 NBA Draft or a future pick. Utah would subsequently move one of Mike Conley and Jordan Clarkson, which will help them replenish some of the capital sent to Indiana for Brogdon.

All that said, the Jazz may prefer to acquire a prominent guard who would be their primary facilitator, as opposed to someone who would split ball-handling duties with Mitchell.

The Jazz have created a team and system that will always be competitive, but it’s not enough to win a championship. They need more oomph. Making a move for Siakam would be taking a chance on something different and keeping their guard rotation, which has a great deal of continuity, intact.

Siakam is a versatile player who fits in any NBA rotation. He does a little bit of everything. The big man is a reputable perimeter shooter who can bang in the post, be a leading scorer, and put the ball on the floor. A one-two scoring punch of Mitchell and Siakam, who becomes Utah’s starting center, would be an enticing duo.

Both players draw attention off the dribble, but Siakam’s length and ability to stretch the floor would take some attention off Mitchell. He gives them another player to go to in crunch time, a luxury Gobert doesn’t provide. This trade is Utah taking a chance in surrendering Gobert’s defense for Siakam’s well-versed offensive game in hopes of better late-game execution — and postseason victories. 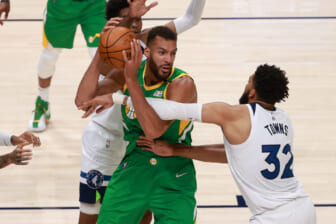 Utah sends Toronto Gobert, who becomes their long-term center, Nickeil Alexander-Walker, and a future second-rounder. The factor that could stop the Jazz from trading for Siakam, though, is preferring to pursue an upgrade in the backcourt while keeping Gobert.

As previously alluded to, a perimeter shooting point guard is an optimum complement to Mitchell. That was likely part of Utah’s reasoning for acquiring Conley in 2019. At the same time, Conley’s presence hasn’t produced a better playoff outcome than when Ricky Rubio or George Hill was the team’s point guard. Russell is a worthwhile flier for the Jazz.

The former Ohio State point guard ran the show for a high-volume perimeter shooting Timberwolves team this season. With that in mind, Russell is a smooth shooter from the perimeter off the dribble, and adept at facilitating for his teammates. 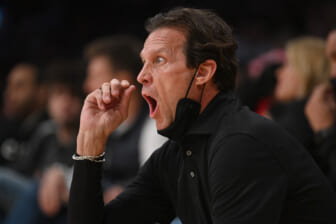 Russell would get three-pointers in transition while Mitchell forces the issue at the rim. Gobert will still be on the receiving end of alley-oops. Clarkson serves as instant offense off the bench. Bogdanovic continues to be an effective shooting scorer. Royce O’Neale provides a “three-and-d” skill set.

Yes, Russell is a free agent after the 2022-23 season. Worst-case scenario, the Jazz lose him for nothing in free agency and get out of the final year of Conley’s three-year, $68 million deal. As for Minnesota’s end of the deal, Conley is a plug-and-play lead guard, Hernangomez provides frontcourt depth and they get a future first-rounder for their troubles.

Utah tries out something different while preserving their identity. They have nothing to lose in trading for Russell.