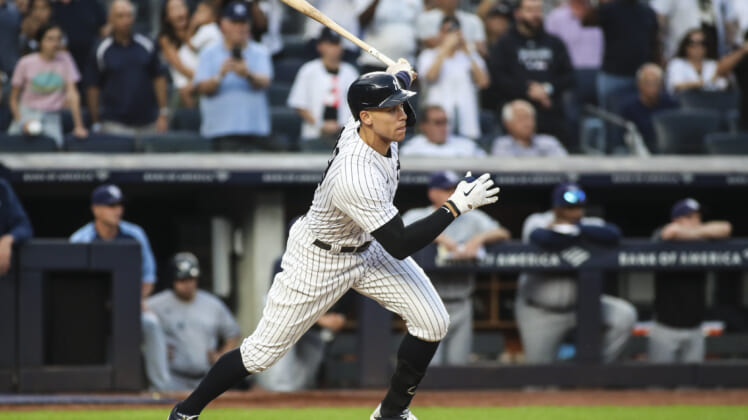 A perplexing 2021 MLB season for the New York Yankees concluded with them losing the American League Wild Card Game to the rival Boston Red Sox, 6-2. Now their attention shifts to a bevy of pivotal questions.

Do they move on from manager Aaron Boone and/or general manager Brian Cashman? Should they dip their feet in the historic upcoming free agent shortstop class? Do they trade a handful of young players for an impact bat or top-of-the-rotation starter? The question more vital than the answer to the aforementioned thoughts is what right fielder Aaron Judge’s future is in the Bronx?

A free agent after 2022, New York’s immediate focus should be on paying the big man. Here’s why extending Judge a year before he hits the open market is an essential course of action for the Yankees this offseason.

Aaron Judge is the constant for the New York Yankees

Judge is the Yankees’ best player based on consistency. He’s a compact hitter with elite power who moves well across the basepaths and fields his position well. Judge put together quite possibly the most balanced season of his MLB career in 2021.

Yes, Judge had an MVP-caliber rookie season, highlighted by him blasting 52 home runs. At the same time, the 2021 season saw Judge strike out at a career-low clip, stay healthy for most of the season and put together the team’s best individual campaign at the plate.

Judge continues to possess a cannon for an arm and a keen ability to get behind and/or make diving catches in right field, which is completely natural for a 6-foot-7 human being. Injuries have chronically impacted the Yankees’ positional depth chart while production has been scattered at select positions. Right field has been the exception when it concerns the latter over the last five years. 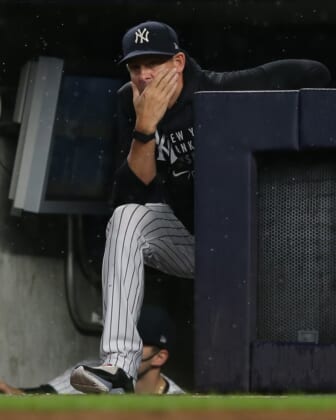 Make no mistake about it: the Yankees have an offense capable of being an elite unit. The issue is, there’s little consistency from anyone outside of Judge. The 2021 season perfectly epitomizes that dilemma.

Gleyber Torres significantly regressed at the plate, posing a minimal power threat and making a great deal of weak contact. Gary Sanchez hit .204. Previously an offensive pillar, Luke Voit hit just .239 and dealt with multiple injuries. Joey Gallo had little impact on the team’s offense, totaling just 30 hits after being acquired from the Texas Rangers near the MLB trade deadline.

DJ LeMahieu, the Yankees’ best hitter from 2019-20, had arguably the worst season of his MLB career, as he didn’t set the table for the sluggers behind him and grounded out at an alarming rate. Gio Urshela was so-so from a production standpoint. Giancarlo Stanton was the only player not named Aaron Judge to continually rake at the plate. That’s a positive for the franchise but one offset by the down years and regression of others.

The Yankees finished the regular season 19th in MLB in runs (711) and 23rd in hits (1,266) and batting average (.237). If Judge missed half the season, the Yankees would’ve missed the Wild Card round by several games. As for 2022, it’s feasible to think that at least one of LeMahieu, Torres, and Sanchez performs better, as well as Judge and Stanton being considerable threats in the batter’s box.

The homegrown Yankee right fielder forms a could-be stellar defensive outfield alongside Gallo, a sound fielder with versatility, and Aaron Hicks, who missed most of 2021 with a wrist injury.

Extending Judge this offseason is the prudent play for the Yankees. Why? Judge is one of the best outfielders and position players in MLB. One way or another, he has a contract worth $30-plus million in average annual salary coming his way for the 2023 MLB season.

If Judge has a mammoth season that sees him hit .310 and blast 45 home runs, impacting the team to the point where he wins or is a finalist for the AL MVP, the price tag on the right fielder could spike. Judge and his camp could pitch to teams that he broke out and that’s the player he’ll be for the better part of a long-term deal. 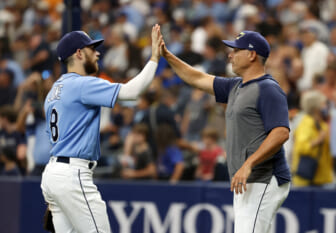 Judge is the face of the Yankees, beloved by the fan base and an indispensable part of their everyday operation. Sure, there are some similarities between this situation and the one that the Red Sox were in with Mookie Betts in 2020; the team was financially strapped and dealt the star outfielder a year before he would’ve hit the open market.

While a big-market team themselves, the Yankees should be able to pay Judge his market value at the moment, as they only have two mega contracts on the books past 2022 (Giancarlo Stanton and Gerrit Cole).

The Yankees have struggled to develop and sustain high-impact position players in recent memory, Torres and Sanchez serving as the latest examples. Can they truly bank on a trio of prospects becoming impact players in Judge’s place? It’s a risk the organization can’t afford to take.

The Yankees have to retool and make a run at the World Series with Judge in the fold. The prospect is daunting and anything but a given based on their competition in the AL East alone (Tampa Bay Rays, Boston Red Sox, and Toronto Blue Jays). That said, it’s the only option if they aspire to win with their deep-rooted core.