The Tampa Bay Rays own the top seed in the American League Playoffs for the second consecutive season. After a monotonous start, Tampa Bay got the ball rolling in late-May and never looked back.

The Rays won an AL East division that saw four teams win 91-plus games. This came with a pitching staff that had 10-plus injuries and was coming off an offseason that saw the organization move on from Blake Snell and Charlie Morton. How did they pull off another division title? Their offense made significant strides, adding a new dimension to their operation.

Here’s how offensive variety has taken the Rays to the next level this season.

In years past, manager Kevin Cash had a talented offense but one that underwhelmed from a production standpoint. This season is a different story.

Brandon Lowe has been an elite power threat from the left side, blasting 39 home runs. Austin Meadows has cleared the bases all season, driving in 106 runs. Randy Arozarena has been a considerable slugging threat. Rookie Wander Franco has been superb, getting on base via contact hitting and playing plausible defense at shortstop. 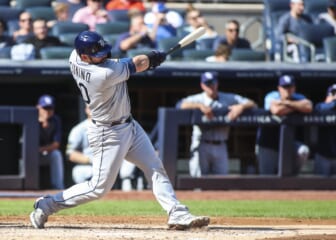 Mike Zunino and Francisco Mejia have been a high-level catching duo with the former blasting 33 home runs and the latter flashing both leather and power. Joey Wendle and Manuel Margot slap base hits to all fields. Yandy Diaz and Ji-Man Choi are power threats.

Kevin Kiermaier is a defensive ace capable of providing a power jolt. Midseason pickup Nelson Cruz remains one of the premier power hitters in the sport and provides an intimidating veteran hitter for crunch time postseason at-bats. This offense has it all from a skill set standpoint.

As previously alluded to, the Rays have endured an overwhelming amount of injuries on the pitching front. Yet, here they are, finishing with the best record in the AL and having just completed their most-efficient regular season in franchise history. Their system works, and the pitching staff remains an elite force.

Shane McClanahan has been efficient, striking out hitters at a high rate. Since coming over from the Milwaukee Brewers in May, Drew Rasmussen (starter/opener) and J.P. Feyereisen (reliever) have been phenomenal, keeping runners off the basepaths and limiting damage in their respective roles. The likes of Andrew Kittredge, Collin McHugh, Ryan Thompson, Louis Head, Matt Wisler and JT Chargois all finished with ERAs under three.

Pete Fairbanks and Jeffrey Springs have been reliable forces. Fellow starters Ryan Yarbrough, Michael Wacha and Luis Patino are either capable of being steady starters or held their own this season. Josh Fleming provides length. This pitching staff finished the regular season third in MLB in WHIP (1.17), fourth in ERA (3.67) and seventh in opponent batting average (.232).

They’re a well-oiled machine from top to bottom with versatility and power pitching. From 2018-20, it was elite pitching with an at-best middle-of-the-pack offense for the Rays, which included the team’s 2020 World Series appearance. This season they’re getting more run support and therefore a wider margin for error, of which they haven’t needed.

If the 2020 Rays had the team’s 2021 offense, they likely take the Los Angeles Dodgers to seven games in the World Series. Frankly, they may have won it.

Tampa Bay Rays have the tools to win the World Series

The Rays are no longer a team that’s severely reliant on holding opposing teams to three or fewer runs. They’re a team both capable of doing as such and homering starting pitchers out of games in the fourth inning.

They no longer have a weakness. Their rotation is stout, the bullpen is stellar and the offense is balanced. Now, they do have a propensity to strike out, as they were third in MLB in strikeouts (1,542) this season.

On the other hand, they have the variety of hitters to move runners across the basepaths, swipe bags (Arozarena, Margot and Brett Phillips) and clear the bases. In other words, they have the combination of bats to grind out a run or two in a low-scoring game where they’re struggling to log extra-base hits. The Rays are also an elite defensive club in both the infield and outfield. Surely, they aren’t a shoo-in to win the AL. The Houston Astros are rolling from all aspects of the game, and the Chicago White Sox are a budding bunch with upside.

All the while, the Rays have to face either the New York Yankees or Boston Red Sox, two teams familiar with the way Tampa Bay operates, in the AL Division Series. It comes down to execution against both of their divisional rivals. The point is the Rays are as well-equipped as the field to defend their AL pennant.

Tampa Bay’s identity is still pitching and defense. Now they have a new dimension, and it comes from their offense breaking through. This is the best team the Rays have fielded under Cash.