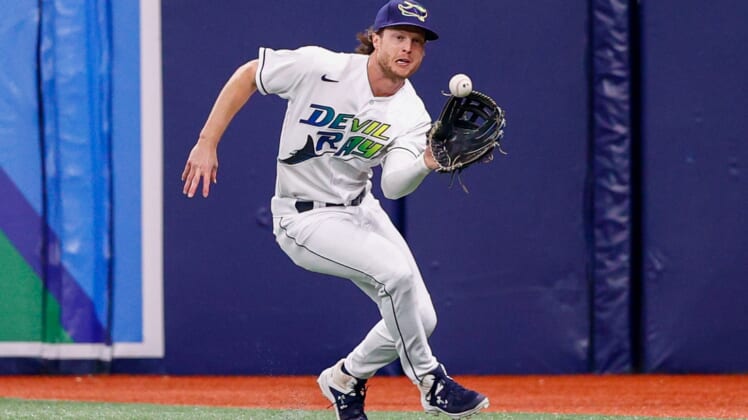 Mike Zunino popped a tiebreaking two-run homer as the Tampa Bay Rays claimed the American League East crown with a 7-3 win over the Miami Marlins on Saturday in St. Petersburg, Fla.

Coupled with the New York Yankees’ 5-3 comeback win over the Boston Red Sox, the victory gave the Rays (96-59) their second consecutive division title and fourth overall in organizational history (2008, 2010).

Zunino had two hits and two runs, and Brandon Lowe went 4-for-5 with three doubles and two RBIs.

Joey Wendle (double) and Yandy Diaz each had two hits, a run and an RBI.

Rookie Shane McClanahan (10-6) exited after five innings that required 84 pitches but matched the club high with his 10th win, sharing the lead with Josh Fleming.

The left-hander yielded six hits and struck out three while walking one.

Bryan De La Cruz — who was ejected in the first inning of Friday’s series opener — had a 3-for-4 outing with a walk and an RBI for the Marlins. Miguel Rojas homered and Jesus Sanchez recorded three hits.

Leading off the third, Rojas cashed in for the visitors. He turned on McClanahan’s 93 mph four-seam fastball and lofted a high home run to left — his ninth of the year.

After Austin Meadows lined a one-out triple to left-center, Wendle doubled through a drawn-in infield to even it at 1.

Following a fielding error by second baseman Jazz Chisholm Jr. to start the fifth, Zunino launched an opposite-field homer — his 32nd — onto the black tarp in right-center for a 3-1 lead.

Miami trimmed it to 3-2 in the sixth when Eddy Alvarez’s fielder’s choice sent Sanchez across, but the Rays answered with Diaz’s single to bring in an unearned run.

De La Cruz kept the Marlins close with a single to score Chisholm in the seventh, but Lowe matched it by doubling in Zunino in the bottom half.

Miami manager Don Mattingly and Alvarez — who struck out to end the eighth — were ejected after the frame.

Tampa Bay got eighth-inning insurance in the form of Brett Phillips’ sacrifice fly and Lowe’s third double before Pete Fairbanks closed it — setting off a celebration on the field.