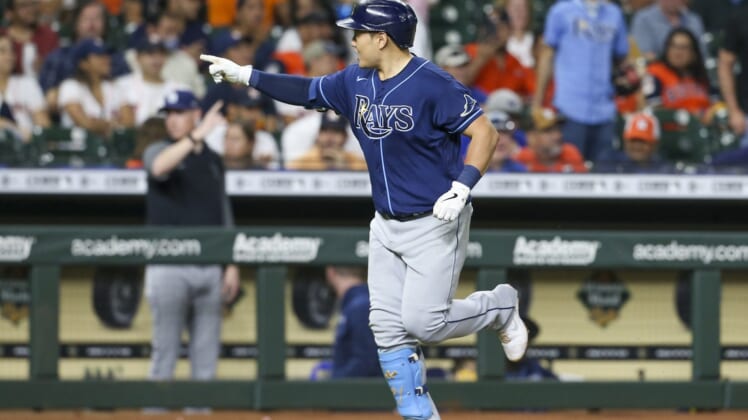 Brandon Lowe and Ji-Man Choi homered while Drew Rasmussen allowed one hit over five scoreless innings as the Tampa Bay Rays clinched home-field advantage throughout the American League postseason with a 7-0 victory over the host Houston Astros on Wednesday.

The Rays set a single-season franchise record with their 98th victory while handing the Astros their fifth loss in six games. Houston would have clinched the AL West with a victory.

Lowe slugged his 35th home run to cap a three-run rally against Astros right-hander Luis Garcia (11-8) in the second inning as the Rays capitalized on a two-out error by Houston center fielder Jose Siri, who failed to catch a fly ball in right-center field off the bat of Brett Phillips.

Phillips scored when Francisco Mejia lined a single to right and Lowe followed by drilling a first-pitch cutter 390 feet to right-center.

The Rays struck again off Garcia with two outs in the fifth. After surrendering a one-out double to Lowe, Garcia issued a two-out walk to Nelson Cruz that led to a mound visit from Astros pitching coach Brent Strom. Choi, mired in a 1-for-24 slump, jumped on the first pitch of the ensuing at-bat for his 11th home run to drive home Lowe and Cruz and double the lead.

Garcia, who had totaled just three strikeouts in his previous two starts, recorded his first four outs via the strikeout against the Rays. But he allowed six runs (three earned) on seven hits and two walks with six strikeouts over five innings in what was likely the final start of his rookie season.

One night after Michael Wacha tossed five hitless innings, Rasmussen (4-1) didn’t allow a hit – the only one he yielded on the night – until there was one out in the fifth. Rasmussen struck out two batters and did not issue a walk. Houston managed three singles and didn’t put a runner in scoring position until there were two outs in the ninth.

Rays rookie shortstop Wander Franco doubled to left with one out in the first to extend his on-base streak to 43 games, matching Hall of Famer Frank Robinson for the longest in history for a player 20 years old or younger. Robinson accomplished the feat in 1956 with the Reds.