The Cleveland Cavaliers have been in shambles since LeBron James left for a second time. Let's see how they can vastly improve this NBA offseason.

The Cleveland Cavaliers enter the 2021 NBA offseason off a disappointing 22-50 record, and need to make some splashy moves to spark a turnaround in the post-LeBron James era.

After grossly mismanaging a potential big-ticket asset in All-Star center Andre Drummond and letting him walk via buyout with no compensation in return, Cleveland needs to be wiser with its next moves. Otherwise, the Cavs risk once again fading into NBA obscurity in 2021-22, despite having some solid young talent, led by Collin Sexton.

While a 2021 NBA Draft lottery pick will ideally help the cause, it’s unclear at this point who Cleveland will select. Thus, here are three other offseason moves the franchise should make to spark a swift turnaround.

Trading Kevin Love is a must-make move at this point. Love is clearly feeling a little trapped on this young, directionless Cavs squad and has been in and out of the lineup frequently.

A move to a contender would be a necessary change of scenery for Love, and Utah coach Quin Snyder has shown what he can do this season when he has more premium talent to work with, leading the Jazz to the NBA’s best record.

Snyder hasn’t really had a stretch 4 of Love’s caliber who can also rebound at an elite level. There are some tantalizing possibilities in the offing if Love can find a way to Salt Lake City. 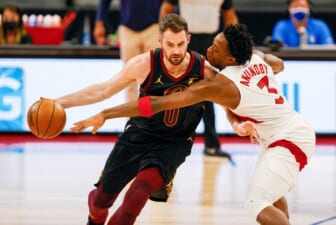 Meanwhile, on the Cavs’ side of this deal, they get some wing scoring in Bojan Bogdanovic to complement 3-and-D 2020 lottery pick Isaac Okoro, and Bogdanovic can also mentor him and bring along the youngster’s offensive game.

Derrick Favors would be an excellent veteran addition to the locker room who, too, has value as a potential trade chip, since he’ll have a player option for the final year of his contract in the 2022 NBA offseason.

Udoka Azubuike is a shot-blocking center and proficient scorer who shot a ridiculous 74.6% from the field in four years at Kansas. Azubuike has seen little action as a rookie on the Jazz, but is a nice developmental option for Cleveland’s thin frontcourt.

According to realGM, the Cavs are projected to have almost $24 million in cap space this offseason, which is sixth-most in the NBA. They have more money to throw around than most teams.

Otto Porter Jr. has struggled to stay healthy and ultimately didn’t live up to the max contract he was once given. However, he’s still only turning 28 in June, and has the chance to really turn his career around if he can avoid further injury. None of his ailments have been catastrophic, either.

Porter is the right mix of bargain and upside Cleveland needs to go shopping for on the open market. He’s a solid and versatile defender, a 40-plus percent 3-point shooter and can totally overhaul his reputation with one great season.

Plug him in alongside Sexton and Darius Garland on the perimeter, and Porter should have a real chance to flourish. If that aforementioned Love trade happens, a new small-ball starting five of Sexton-Garland-Bogdanovic-Porter-Jarrett Allen looks pretty good on paper.

Whatever the Cavs do with their 2021 first-round pick, Porter’s presence alone would allow Okoro to come off the bench rather than be pressed into such big minutes for a team that really needs to be a playoff contender next season.

Acquiring DeMarcus Cousins isn’t exactly a move that suggests an instant turnaround on the horizon. It’d probably be a tough sell to convince Boogie to come to Cleveland in the first place.

On the other hand, Cousins isn’t going to get big minutes in many places, and if the previously proposed moves of parting with Love and signing someone like Porter are made, in tandem with a high draft pick, it’d strengthen a prospective sales pitch.

Many are likely quick to discount Cousins, and perhaps for good reason. He had a short-lived stint on the Houston Rockets this season before he was cast off in favor of rising star Christian Wood.

It’s not like there’s any shame in that. Wood averaged 21 points per game when he was healthy. The Rockets wanted Wood to gain experience in a prominent role, and Cousins impeded that initiative. No harm, no foul.

But after a torn Achilles and an ACL tear that caused him to miss all of the 2019-20 campaign, Cousins has actually shown signs of elite play. One such instance: A stat line of 28 points, 17 rebounds and five assists against the Dallas Mavericks on January 23.

A strange-but-true fact: Cousins is still only 30 years old. Don’t worry if that weirds you out — you’re not the only one.

Now thriving with the Los Angeles Clippers thriving as a role player, if Cousins emerges from the NBA playoffs unscathed, he may want to try his luck to be a high-end starter one last time. Cleveland presents a great opportunity,

This could benefit the Cavs immensely if Boogie winds up signing a bargain, prove-it free-agent deal and pops. Cousins would bring playmaking ability, floor-stretching shooting, board-crashing prowess and be another veteran voice in a young locker room.

And there you have it, Cleveland. A plan to restore the Cavs to NBA relevance.