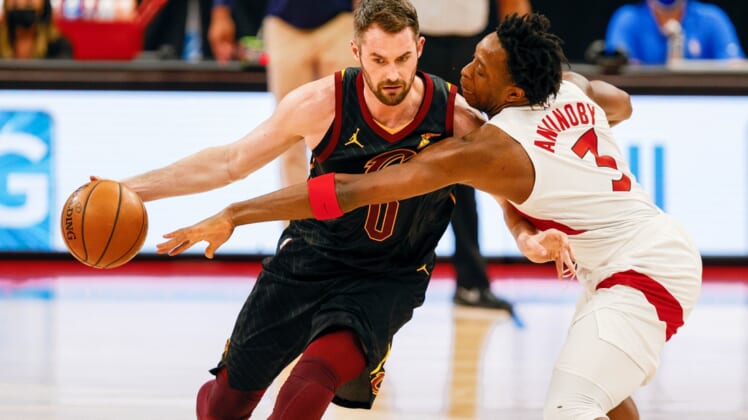 Cleveland Cavaliers forward Kevin Love on Wednesday admitted he was frustrated when he opted against inbounding the ball to a teammate and swatted it in play during the team’s last game.

Love then stood idly by as the Toronto Raptors gained possession and promptly drained a 3-pointer late in the third quarter. The Raptors broke open a close game and posted a 112-96 victory over the Cavaliers on Monday.

Love, 32, didn’t play the rest of the game and exited the locker room before the final whistle. He did not speak to reporters after the game, but he did so for approximately 13 minutes on Wednesday morning.

“I (messed) up,” Love said. “Everyone knows that. My intent wasn’t to disrespect the game, my intent wasn’t even for the damn ball to go inbounds. It was a moment that I got caught up in.”

Love, who did not take questions after his comments on Wednesday, is in the second season of a four-year, $120 million contract extension. He is averaging 11.7 points and 6.4 rebounds in 18 games in 2020-21. Those numbers are decidedly lower than his career averages of 18.1 points and 11.0 boards, respectively.

Love appeared to take issue with the officiating on Monday. He was shoved in the back and ran into the stanchion following a layup by the Raptors. Official Brandon Schwab simply tossed the ball to Love, who then made his dismissive in-bounds pass.

“We talked about it. He apologized to his teammates for it, and we’ll move on,” Bickerstaff said.

A five-time All-Star, Love began revealing his battles with mental health in 2018 and has been working to remove the stigma from mental-health issues through the Kevin Love Foundation.