Veteran big man Tristan Thompson could be the next man out of Boston following the Celtics’ blockbuster trade of Kemba Walker to the Oklahoma City Thunder late last week.

New Celtics president Brad Stevens is looking to change things up after an ugly first-round exit in the 2021 NBA Playoffs. He’s also going about things differently than his predecessor, Danny Ainge.

That could now include moving off Thompson and his $9.72 million salary for next season. This is magnified by the fact that Boston reacquired Al Horford in the aforementioned Walker blockbuster.

Thompson, 30, could still provide some value for contending teams. He’s a top-notch rebounder and a pretty solid defender. In his first (and likely only) season with the Celtics, the former Cleveland Cavaliers first-round pick averaged 7.6 points and 8.1 rebounds. As a rotational big, he could make sense for multiple teams. It’s in this that we look at three ideal Tristan Thompson trade scenarios.

It’s not a secret that Dallas’ unnamed new general manager is going to look for an upgrade on defense. That will likely come on both the perimeter and in the low-post. It’s one of the things that was missing for the Mavericks during a disappointing 2020-21 campaign despite the brilliance of Luka Doncic. Thompson would more than provide that inside, helping Doncic out in the process.

As for Boston, the premise of this trade would be to acquire another capable perimeter shooter after the team struggled in that regard last season. Burke, 28, is a career 35% three-point shooter and is one season removed from shooting 43% from beyond the arc. Dallas also acquires a high-upside second-year forward in Bey who could end up being part of the rotation down the road.

This would pretty much be a salary dump for a Celtics team that’s a projected $16 million over the cap and must think about re-signing pending free agent Evan Fournier. Said move would save Boston nearly $10 million against the cap in 2021-22, helping its financials in a big way.

In terms of potential fits for Thompson, the Knicks could make the most sense. They are coming off a tremendous season under NBA Coach of the Year Tom Thibodeau, who places a tremendous amount of value on defense. Thompson more than fits that mold. And given the injury issues surrounding starting Knicks center Mitchell Robinson, acquiring depth could make sense. It also helps that New York is expected to have roughly $55 million in cap space this summer.

By virtue of them trading Kemba Walker and with Marcus Smart on the trade block, the Celtics are in need of both a starting and backup point guard. That’s where the 25-year-old Morris could make sense as an under-the-radar option. The former second-round pick from Iowa State more than proved himself late last season with Jamal Murray sidelined to injury — averaging 13.7 points and 5.5 assists on 40% shooting from distance in the playoffs. He’d be an ideal fit to run the Celtics’ offense. 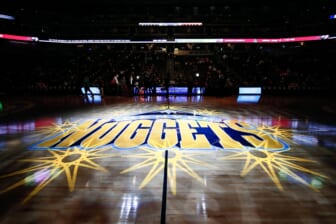 In return, Denver nabs a veteran big to replace pending free agent Paul Millsap. It also acquires 2020 first-round pick Aaron Nesmith, who has shown upside from the wing. That’s primarily true from three-point range. It’s certainly a need for Denver with both Aaron Gordon and Michael Porter Jr. vying for time at the four.