10 takeaways from Week 10 of the college football season

There were some humungous games on the college football schedule in Week 10, but nobody could have predicted the big upset that will surely rock the new playoff rankings next Tuesday.

Aside from the huge upset, which we’ll cover here in a jiffy, the rest of the schedule lived up to its billing, and fans were treated to another phenomenal weekend of games.

The following are the biggest takeaways from all the action.

1 . Michigan State learns what it’s like when the football gods are against you

After beating Michigan earlier this year in the craziest way possible on a botched punt, Michigan State (No. 7) discovered what it’s like to feel the sting of a loss inspired by the football gods against Nebraska on Saturday night in Lincoln, Neb.

Connor Cook, who had a big game (335 yards and four touchdowns) engineered a 16-play touchdown drive in the fourth quarter that took almost nine minutes off the clock. Following the dominant offensive possession, the Spartans appeared to have the win in their back pocket heading into the final minutes of the contest, up by 12 points with just over four minutes left on the clock.

Then Nebraska quarterback Tommy Armstrong answered with a 10-play scoring drive that took less than two-and-a-half minutes off the clock, finishing it off himself with a one-yard run for six. This score cut the lead to five points, 38-33.

After a failed onside kick, it seemed the victory was still secure for the Spartans, but this is when the football gods got involved, and shortly thereafter pandemonium ensued. Nebraska forced Michigan State to punt, ending up with the ball at the Cornhuskers’ 9-yard line, with just 55 seconds remaining in the game.

Armstrong completed three passes of at least 28 yards, winning the game on a controversial 30-yard touchdown pass to Brandon Reilly.

Wow. Refs said the WR was pushed out on this controversial TD that won the game for #Nebraska (h/t @RedditCFB) https://t.co/KjyP48nDBD

Memorial Stadium erupted when the Spartans failed to win the game in the waning moments following the stunning score, and the field was flooded with fans who couldn’t believe what they just witnessed.

2. Clemson made playoff committee look good in victory over FSU

It was somewhat of a surprise when Clemson was dubbed No. 1 in the nation by the College Football Playoff Rankings committee earlier this week. After watching the Tigers beat a highly talented, one-loss No. 16-ranked Florida State team on Saturday, 23-13, there can be no doubt this really is the best program in the nation.

Deshaun Watson didn’t put up the scores he did last weekend, but he was rather brilliant. The sophomore totaled 404 yards and threw a 38-yard touchdown strike to Deon Cain to open the third quarter, which gave the Tigers their first lead of the game.

Just as impressive as the fine play of Watson was the swarming Clemson defense, which constantly harassed FSU quarterback Sean Maguire. After earning the starting job with a brilliant performance against Clemson, Maguire was shut down completely. He threw one interception and no touchdowns for Florida State, which is out of the playoff picture now completely with two losses.

Clemson has a clear path to an undefeated finish now, without another ranked team on the schedule and two of its remaining three games at home. 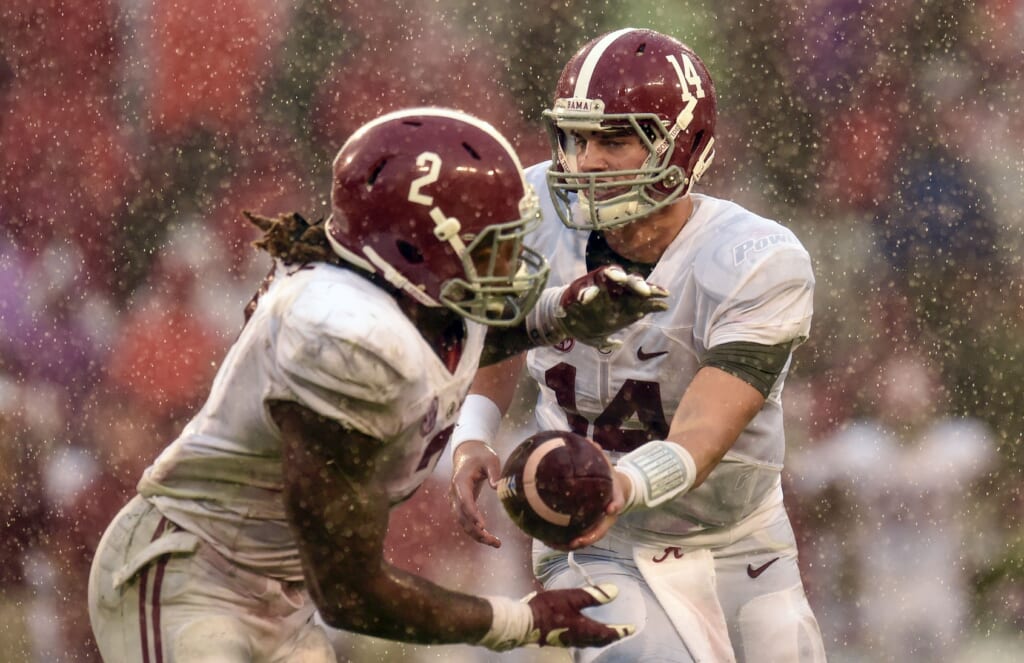 Leonard Fournette was darn-near shut out by the stingy run defense of Alabama Saturday night at Bryant-Denny Stadium. He finished with 31 yards and one touchdown on 19 carries, which put a huge damper on his status as the definitive Heisman favorite.

His counterpart on ‘Bama’s sideline, Derrick Henry, did his best to make people forget about Fournette’s horrid performance, and he vaulted even further up the Heisman rankings with a memorable performance to carry the No. 4-ranked Crimson Tide to a comfortable 30-16 win over previously unbeaten LSU (No. 2). Henry finished the game with 210 rushing yards and three touchdowns.

The huge win puts ‘Bama in the driver’s seat to win the SEC West and to get into the playoffs. Given the timing of the loss for LSU, the Tigers are likely out of the running for the latter but still have a shot at the former.

LSU still has games against Ole Miss and Texas A&M — both programs also lost on Saturday — while ‘Bama only has Mississippi State left as a viable threat on the schedule.

4. Notre Dame is being carried by DeShone Kizer 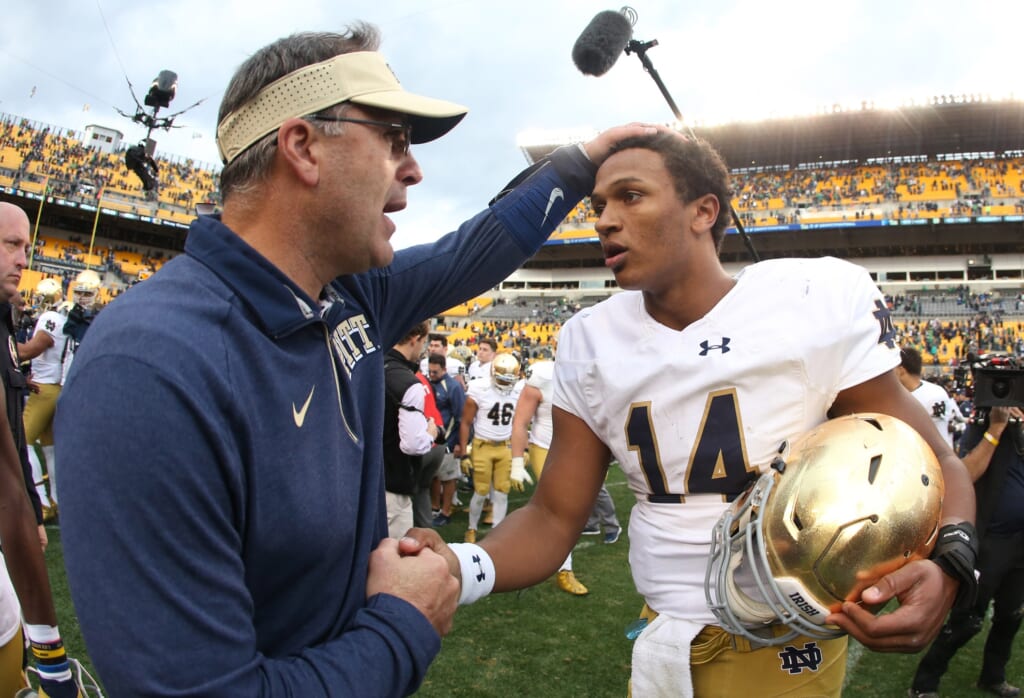 The Fighting Irish are winning games because sophomore quarterback DeShone Kizer has been unbelievably good in crunch time.

Since taking over for Malik Zaire in Week 2, he’s engineered three fourth-quarter comeback wins. Then on Saturday Kizer went off on the road against Pittsburgh for six total touchdowns, leading Notre Dame (No. 5) to a 42-30 win.

Notre Dame has been destroyed by injuries this year. In addition to losing starting quarterback Zaire, the Irish were down five other starters heading into the Clemson game. Making matters worse, running back C.J. Prosise, who was dubbed the starter when Tarean Folston was lost for the season, went out with an undisclosed “upper body” injury on Saturday.

Yet still, Notre Dame continues to win game, thanks to Kizer.

The way it’s going, Kizer and the Fighting Irish are headed for a pivotal showdown against Stanford, which also has one loss, in the final game of the regular season. Provided both teams continue winning, the winner will likely make it into the playoffs while the other will certainly be on the outside looking in.

Most college football analysts figured the week off would do TCU (No. 8) good, as the Horned Frogs have been dealing with a plethora of injuries this year. Rather than renew their strength, the week off seemed to hurt the chemistry of TCU’s offense, which experienced a failure to launch early against Oklahoma State.

After a one-yard touchdown run by Cowboys quarterback J.W. Walsh early in the third quarter, TCU found itself down 35-9. That’s when Heisman hopeful Trevone Boykin (who finished with four interceptions) and the Horned Frogs offense finally woke up with three touchdown-scoring drives, but it was too little, too late.

Adding insult to injury, wide receiver Josh Doctson left in the second quarter with an apparent wrist injury and never returned. As you can see here, it didn’t look good, and it’s not yet know if or when he’ll be able to return. 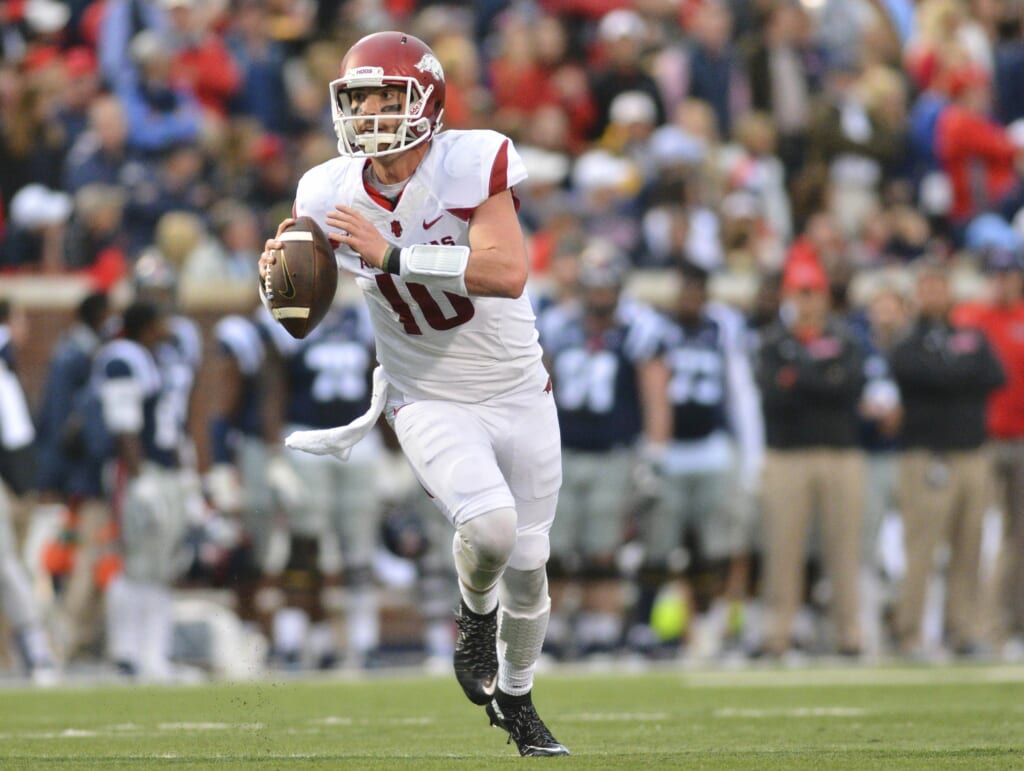 Heading into Week 10, Ole Miss (No. 18), had a legitimate chance to win the SEC West over LSU and Alabama and play in the SEC Championship Game. Arkansas played the spoiler on Saturday, though, winning in overtime thanks to a career game by senior quarterback Brandon Allen.

Allen was so brilliant against the Rebels that the Oxford Police Department received some 911 calls for his removal from Vaught-Hemingway Stadium. He finished with 442 yards and six touchdowns through the  air, leading the Razorbacks to a 56-55 overtime win.

Of course, the play of the game was a crazy 4th-and-25 conversion on a blind lateral.

College football NEVER disappoints. How did Arkansas pull off this 1st Down? https://t.co/VNr9K99O7r

With two losses on the books in the SEC and three overall, Ole Miss lost more than just a game on Saturday. Instead of potentially competing for the SEC championship, the Rebels will watch from home. And the school will now likely be playing in a bowl game with significantly less prestige than it would have with an appearance in the SEC Championship Game.

Seth Russell’s neck injury was unfortunate, but it appears his replacement is going to do just fine for the Bears going forward. Facing a gritty Kansas State squad that almost beat TCU earlier this year, on the road, freshman quarterback Jarrett Stidham put up Russell-esque numbers, with 419 yards and three touchdowns.

In addition to his impressive numbers, it was encouraging to see Stidham immediately finding success targeting junior receiver Corey Coleman, who ended up with 11 catches for 216 yards and two touchdowns — including an 81-yard bomb.

Corey Coleman finished with 11 catches for 216 yards and a pair of TDs against Kansas State. He an… -via @ESPN App https://t.co/YfRwzHxF1v

Two late scores by the Wildcats in the second half of the fourth quarter made the game seem closer than it actually was. In the end, Baylor (No. 6) remained undefeated with a 31-24 win, and Stidham was turnover-free to go along with his electric performance.

It remains to be seen if Baylor can remain undefeated, with a trio of Big 12 giants on the schedule the next three weeks, but Stidham won’t be the weak link if the Bears do fall this season.

8. Dak Prescott is one of the most underrated players in the nation

Senior quarterback Dak Prescott is quietly have a tremendous season for Mississippi State (No. 20), which has just two losses on the record — one loss at home to LSU (by two points) and another on the road against Texas A&M.

Prescott is completing passes at a high rate (66.7 percent) and has thrown 18 touchdowns compared to just one interception. He went off on Thursday night against Missouri, passing for 303 yards and four touchdowns.

Dak Prescott strafed a very good Missouri defense tonight for 303 yards and four touchdowns. Best player in the country nobody talks about.

He also scored his 100th career touchdown in the contest, and we couldn’t agree more with David Caraviello about his assessment that Prescott is the “best player in the country nobody talks about.”

Maybe it’s time for a change. Prescott is really good, and it’ll be interesting to see what kind of interest he receives from the NFL as the draft process begins in earnest following the conclusion of the 2015 college football season.

9. Stanford getting stellar play out of QB Kevin Hogan 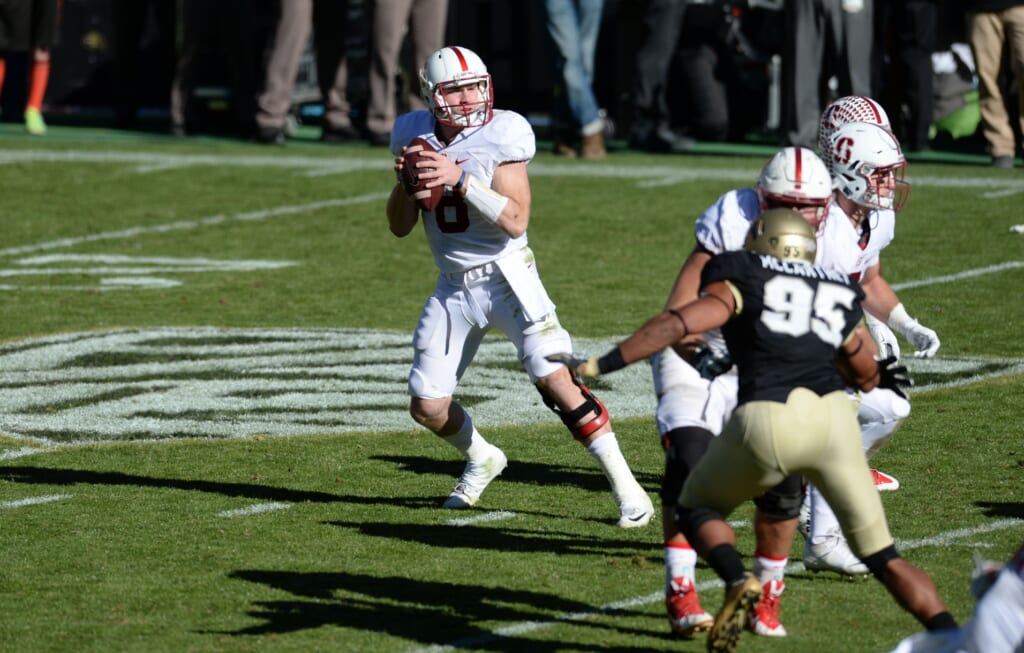 Christian McCaffrey has been mentioned as a potential Heisman candidate this year, and for good reason.

However, Stanford (No. 11) will only go as far as quarterback Kevin Hogan can take the program. Thankfully, the senior passer has been playing outstanding football of late and appears to be peaking at the right time for The Cardinal to potentially make a run to the playoffs.

Hogan has scored at least two touchdowns in every game this year but the first, which not coincidentally was the team’s only loss. When he couldn’t get much done with his arm last weekend against Washington State, he found a way to make big plays with his legs.

On Saturday against Colorado he was sharp through the air and scored three total touchdowns while passing Andrew Luck on the school’s all-time wins list.

Combined with the all-around greatness of McCaffrey, who had 162 yards rushing and receiving and a passing touchdown, Hogan gives Stanford a shot at the playoffs. Of course, the final game against Notre Dame looms large for both programs.

10. Memphis out of playoff contention after blowout loss to Navy

It was always going to be tough for Memphis (No. 13) to somehow convince the playoff committee it belonged amongst the elite, even if the Tigers did finish the season undefeated. Unfortunately for them, that decision won’t be necessary after losing to Navy in blowout fashion, 45-20, on Saturday.

The triple-option offensive attack of the Midshipmen ate Memphis’ defense for lunch, totaling 374 yards on the ground (5.7 yards per carry) and five rushing scores. Senior quarterback Keenan Reynolds didn’t show up much on the stat sheet but did manage to complete a 75-yard touchdown pass to receiver DeBrandon Sanders.

On the other side, hyped Memphis passer Paxton Lynch did throw for 305 yards but managed just one touchdown himself, along with an interception.

It was a tremendous let-down performance by the Tigers, who are now completely out of the playoff race after moving up in the rankings on a weekly basis before this loss.