There are very few coaches in the NFL who truly have any real job security. Then there are the rest, and among them is a group of NFL head coaches who are legitimately fighting to keep their jobs.

That’s the group we’ll be focusing on today. Coaches who are facing the very real threat of losing their jobs if things go the wrong way in 2018.

Some of these men have done nothing to inspire confidence. Some have won Super Bowls. There’s a wide disparity in terms of the resumes involved, but every one of these NFL head coaches needs to see positive developments out of their clubs this coming season.

We all know Jerry Jones is loathe to change head coaches. He’s staunchly stood behind Garrett for years, but let’s just say soon-to-be Hall of Famer Terrell Owens has a legitimate gripe about Garrett’s competence, or lack thereof. In Garrett’s eight-year career as the head coach of the Cowboys, he’s managed to make it to the playoffs just twice, posting a record of 1-2 in postseason play. And when you take away those two playoff seasons, Dallas has a regular-season record of 42-46.

Garrett’s ability to produce a winner is, at this point, suspect. If the ‘Boys once again sputter and fail to make the playoffs, then Jones will be forced to admit he needs to start over again, or continue to suffer through mediocrity. 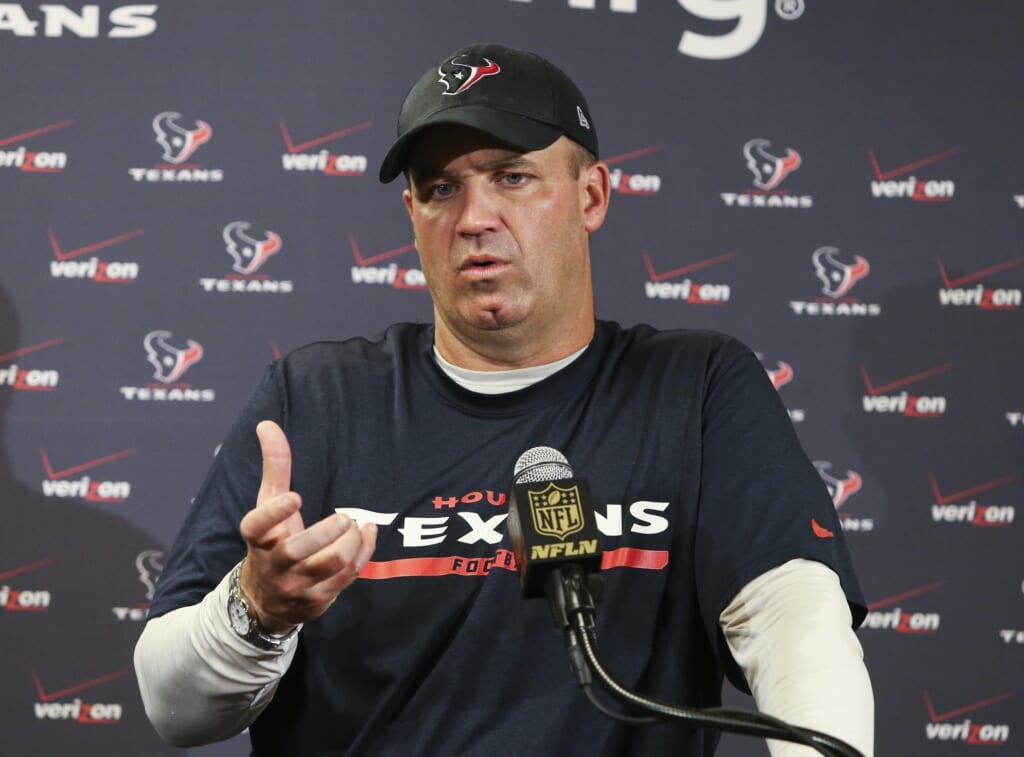 To this point in his young career as a head coach, O’Brien has pulled off three marginally successful careers that were only successful due to the outstanding defense Houston features. In those campaigns, O’Brien played quarterback roulette with an abysmal cast of characters. Then last year the wheels came off when burgeoning star Deshaun Watson, J.J. Watt and Whitney Mercilus all ended up on injured reserve.

There really is no reason Houston shouldn’t challenge the best in the AFC this year barring another catastrophic injury-filled campaign. So, if the Texans end up having another disappointing season, don’t be surprised if O’Brien finds his seat getting downright sizzling toward the end of the campaign.

For a time, Carroll’s Seahawks appeared to be a dynasty in the making. After the team won Super Bowl XLVIII, it seemed Seattle was destined for multiple titles. Then, Carroll made the critical error one year later to throw at the goal line, rather than utilize Marshawn Lynch, and Malcolm Butler ripped the hearts out of every player, coach and fan of the team. According to a couple of former Seahawks players, that moment marked the beginning of the end for Carroll, whom they believe lost the trust of his team.

Even though Seattle is coming off a winning 2017 campaign (9-7), it’s impossible not to look at this coming season as a make-or-break year for Carroll. The Legion of Boom is no more. The team’s offensive line is still a train wreck. Brian Schottenheimer is the offensive coordinator. Given the incredible amount of turnover, not to mention some lingering issues with another top defender, it’s not crazy to wonder if this team will implode in 2018.

Since his first year with Gang Green, when the Jets went 10-6 and barely missed the playoffs in 2015, expectations have been high that Bowles could turn this franchise around. Then reality hit, and during the next two seasons the Jets won just 10 games total.

There’s no doubt that Bowles is on the hot seat. And it’s debatable whether that’s fair or not. The Jets have made some big mistakes with roster building the past half decade (or longer), and some would argue Bowles has done a darn good job making lemonade out of the lemons he’s been given. But now he has the quarterback of the future, two solid veterans to choose from as well at that position, and a strong defense that should keep his team in games. So, Bowles needs to win, and he needs to win now. Otherwise, the Jets will likely be inclined to bring in an offensive-minded head coach to help usher Sam Darnold into the next era. 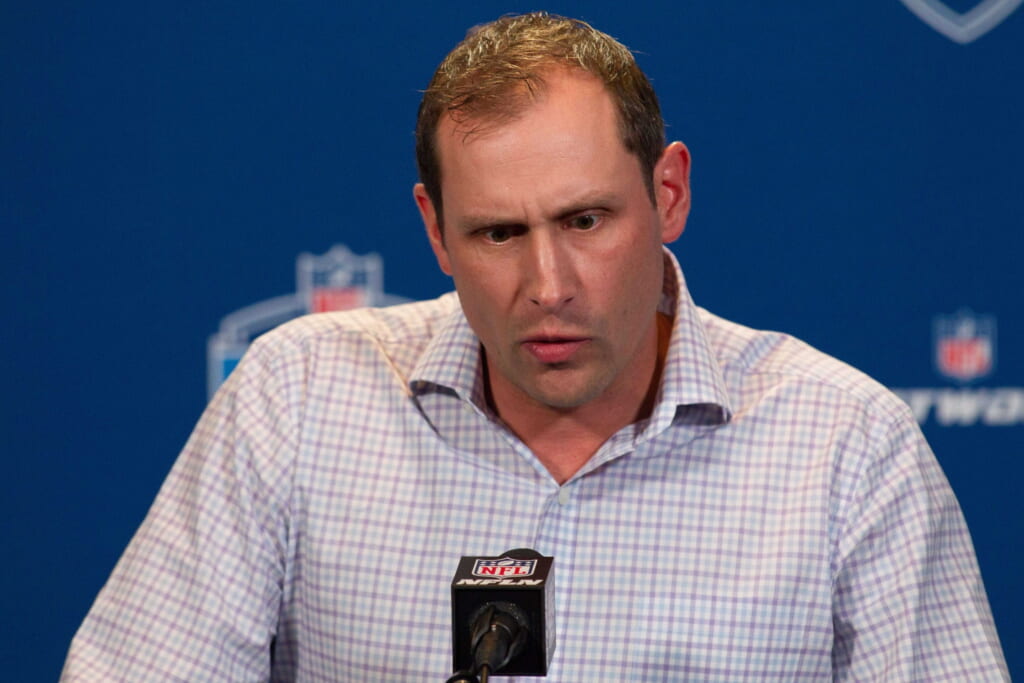 When Gase became the new head coach for Miami in 2016, he was one of the hottest coaching prospects in the league. He was supposed to turn Ryan Tannehill into a star, turn the offense into a juggernaut and challenge New England for supremacy in the AFC East.

Well, that didn’t happen. Gase led a remarkable turnaround in his rookie campaign, which generated 10 wins for the Dolphins. But last year the wheels came off. Ryan Tannehill’s injury contributed somewhat to this, but it’s impossible not to wonder about Gase’s inability to get the most out of his players when we consider how much better Jay Ajayi performed once he was out of Miami and playing for Philly last year. Gase also had some influence in Jarvis Landry and Ndamukong Suh leaving Miami, and it’s going to be interesting to see how those roster changes go this year.

The biggest reason Koetter kept his job this offseason is that the Bucs hope the offensive-minded head coach can turn Jameis Winston into a star. There was a ton of pressure on Koetter and his team last year to break through with a postseason appearance. Rather than live up to the hype, however, Tampa Bay crashed and burned in a big way. Koetter lost his locker room to boot, leading to a disastrous 5-11 season.

General manager Jason Licht did an excellent job shoring up the defensive side of the ball this offseason, and there is talent galore on offense. Especially now that Ronald Jones II is on board as the team’s newest explosive running back option. There really is no reason the Bucs shouldn’t put together a winning season in 2018. If that doesn’t happen, we fully expect Koetter to be out of a job before the playoffs begin.

After a very disappointing 5-11 debut season as the head man in Denver, Joseph was saved from the embarrassment of being fired after just the one campaign. John Elway had mercy on his soul, though the message was clear: Joseph needs to get this figured out, and quickly.

Theoretically, Joseph has the pieces he needs to get Denver back into the playoffs — a goal that’s been missed two years running by this team. Case Keenum was signed in free agency to provide stability to the offense, and the defense is still filled with elite talent at a number of positions. So, if the Broncos stumble again in 2018, don’t expect Elway to show mercy again. 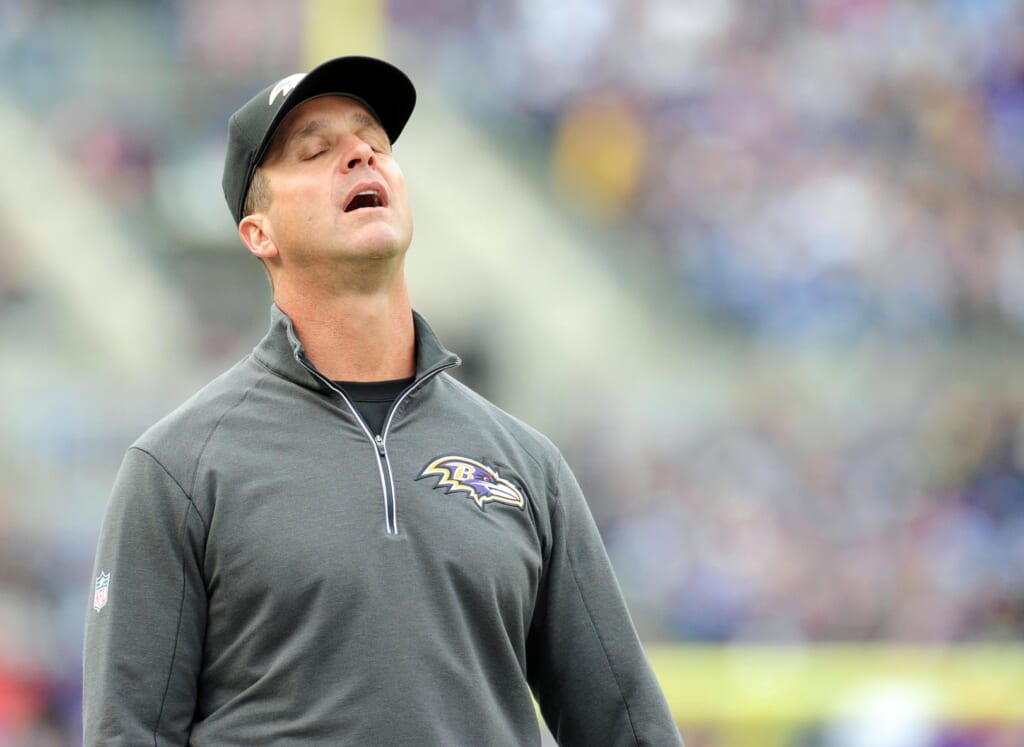 Like Pete Carroll, Harbaugh finds himself in a precarious position despite some tremendous previous success, including a Super Bowl win. But unlike the Seahawks, the Ravens haven’t even had much recent success to speak of, and owner Steve Bisciotti has even admitted he’s considered moving on already.

The Ravens feature an elite defense. It’s been the offense that has been the biggest problem in recent years. Joe Flacco’s days are likely numbered, especially since Lamar Jackson has entered the fold. So, it Flacco and Harbaugh don’t turn things around this year, we fully expect the Ravens to look for new blood at the top, likely focusing on an offensive-minded coach who can maximize Jackson’s unique skills.

Four years into his first head coaching gig, Gruden hasn’t done much to distinguish himself as a keeper. He’s posted an overall record of 28-35-1 in Washington, which has yet to win a playoff game under his guidance.

Given the level of competition in the NFC East, Gruden has a lot of work ahead of him to keep Washington out of the division’s basement. The offense will look completely different this year, with Alex Smith and Derrius Guice leading the charge. Whether any of that makes a difference remains to be seen. But if Gruden can’t produce a winner his time is likely up in Washington.

There’s really only one thing we need to look at here to highlight why Jackson is on the hot seat right now: 1-31.

Jackson’s last two years mark the absolute worst the NFL has ever seen in a two-year stretch. Even knowing that the team’s quarterback situation was as bad as it was, it’s still a remarkable feat that Jackson only generated one win in two seasons.

Now he’s coming into 2018 with no excuses. The Browns feature promising talent on both sides of the ball. And whether it’s Tyrod Taylor or rookie Baker Mayfield under center, the offense should be plenty dangerous. It’s put up or shut up time for Jackson and the Browns.