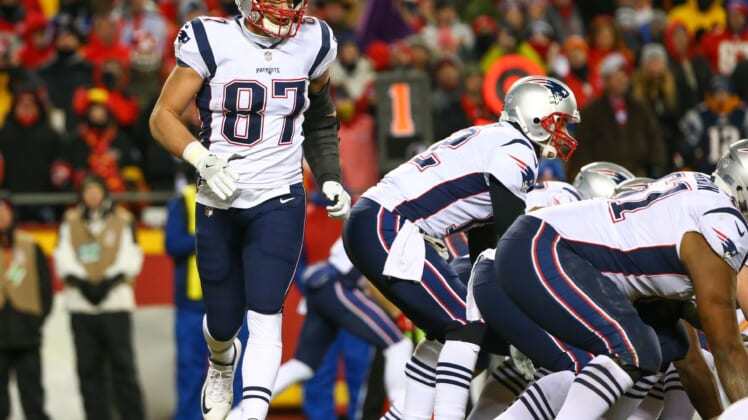 The New England Patriots and Los Angeles Rams are set to do battle in Super Bowl LIII next Sunday.

With the NFL giving a week off between conference title games and the championship match, we’ve been inundated with stories and questions at nearly every turn. But now that the game is getting closer, it’s time to check in on 10 burning questions in the race for the Lombardi.

New England is facing a massive coaching turnover after the game. How will that impact the team come Sunday? In Los Angeles, there’s concern over the usage of running back Todd Gurley. Will head coach Sean McVay rectify that? These are among the burning questions we will look at here.

They are all professionals. We can expect each and every one of them to keep their eye on the prize. Even then, we’ve seen coordinators struggle in the big game as they prepare for head-coaching jobs. Former Atlanta Falcons OC Kyle Shanahan was a prime example of this back in Super Bowl LI. Whether this comes to fruition with Flores and Co. remains to be seen.

Will the Rams find better use of Todd Gurley?

Gurley’s lack of usage was a major issue in the NFC Championship Game. Some early-game struggles from the reigning NFL Offensive Player of the Year led to Gurley going for just 10 yards on four attempts. Statistically, it was the second-worst performance of Gurley’s career.

Following the game, Rams head coach Sean McVay noted that he needs to get Gurley more involved. Ya think? Taking on a Patriots defense that has given up a total of 60 rushing yards in two playoff games, it’s important that the Rams get Gurley involved. Period.

How do the Pats plan on attacking Los Angeles’ secondary?

Rob Gronkowski seems to have a clear advantage, especially given how much Rams safety Lamarcus Joyner has struggled in the playoffs. That’s until we realize Pro Bowler Cory Littleton has been strong in coverage. This is a surprising aspect of what has been an otherwise disappointing Rams defense.

One might think that going after Marcus Peters would make a ton of sense. He was burnt early an often during the regular season — only to perform well against Michael Thomas and the Saints in the conference title round. We’re not expecting Brady to avoid anyone here. But how Peters performs could tell us the story in Atlanta.

Too big of a stage for Jared Goff?

The difference between Tom Teriffic and Goff in terms of experience is vast. We can go all the way back to 1995 to examine this. Brady was selected in the MLB Draft that year by the Montreal Expos. At the very same time, Goff’s father was still playing in the majors. The younger Goff himself was just one year old. Think about that for a second when taking into account the experience factor.

We’re not going to conclude that the stage will be too big for Goff this coming Sunday. But there is something to say about experience on the game’s grandest of stages. Given that Brady has more playoff starts (39) than Goff has regular-season starts (38), this is magnified even further.

Can New England find the right mix at RB?

Balance was not a problem for the Patriots during their AFC Playoff run. In fact, this squad racked up 331 combined rushing yards against the Chargers and Chiefs. The issue heading into Super Bowl LIII is indicative of a larger “problem” for the Patriots. How are they going to allocate touches between the likes of Sony Michel, Rex Burkhead and James White? All three have shown out in different areas thus far in the playoffs.

A rookie first-round pick, Michel has gained 242 yards and five touchdowns on the ground. Burkhead scored the game-winning touchdown in overtime against Kansas City and is seen as a goal-line back. Meanwhile, the catch-first White has 19 receptions on 23 targets. The onus is going to be on offensive coordinator Josh McDaniels to find the right mix and ride the hot hand.

Will game draw a big audience in LA?

Common logic seems to suggest that television ratings will be incredibly high for Super Bowl LIII in Southern California. The hometown team is playing in its first big game as the Los Angeles Rams since all the way back in 1979. That’s all fine and dandy. But we’ve learned thus far this season that the local audience couldn’t care less about their NFL teams.

It’s really been a black eye for these two local teams and the entire National Football League. For their part, the Rams have not been spared of said embarrassment. It will certainly be interesting to see how ratings in Southern California compare to other major markets. If there’s a lack of interest, we’ll find out the morning after Super Bowl LIII concludes.

Which free agents stand to cash in?

This represents the final opportunity for impending free agents on both teams to show what they’re made of. Sure going out on top as a team is the biggest goal here. But there’s certainly a financial component to all of this.

For the Patriots, that includes a star pass rusher in Trey Flowers who has led the team in sacks each of the past two seasons. How he performs against a great Rams offensive line could be telling here. In Los Angeles, there’s even more reason for impending free agents to prove their worth. That includes star guard Rodger Saffold, former Pro Bowl defensive tackle Ndamukong Suh and struggling safety Lamarcus Joyner. We’re more than intrigued to see how all of these players perform in potentially their final game with their current team.

Is this Rob Gronkowski’s final game?

The tea leaves have been blowing in this direction for some time now. Fresh off another injury-plagued regular season, this future Hall of Famer might decide the time is now to call it quits. Whether that’s to pursue a career in acting or wrestling remains to be seen.

What we do know is that Gronkowski understands full well the long-term injury ramifications that come with continuing to take a beating on the field. After all, he’s missed a game to injury each of the past seven seasons. Coming off a solid six-catch performance in the AFC Championship Game, it will be interesting to see if Gronkowski simply hangs his cleats up in the locker room immediately after Sunday’s big game.

Which under-the-radar player could be GOAT?

More often than not, the man who comes away with the top personal honor during the Super Bowl is not the best known individual on his team. Nick Foles earning the honors for the Eagles last season was somewhat surprising. But given he plays quarterback, it wasn’t incredibly shocking. It’s players at other positions who’ve come away with the MVP that astonishes the masses. The most-recent example of this is former Seahawks linebacker and current 49er Malcolm Smith. He earned the game’s top honor in Super Bowl XLVIII.

Who might be that player this coming Sunday? James White and Rex Burkhead come to mind for the Patriots. Both are capable of adding multiple touchdowns out of the backfield. In Los Angeles, let’s not sleep on wide receiver Josh Reynolds and veteran running back C.J. Anderson. It will certainly be interesting to see which under-the-radar players step up.

Cooks had to feel a bit burned when the Patriots dealt him to Los Angeles for a first-round pick this past spring. It was the second time in a calendar year that a team moved on from the 1,000-yard receiver. After helping the Rams dispose of his former Saints team in the NFC Championship Game, Cooks will look to exact revenge once again Sunday.

The 25-year-old Cooks had a pretty solid initial season with the Rams — putting up 80 receptions for 1,204 yards and five touchdowns. Though, he finished second to Robert Woods on the team in both categories. We’re sure Cooks will want to show out there. Whether that happens will depend heavily on how he performs in a matchup with stud Patriots cornerback Stephon Gilmore.