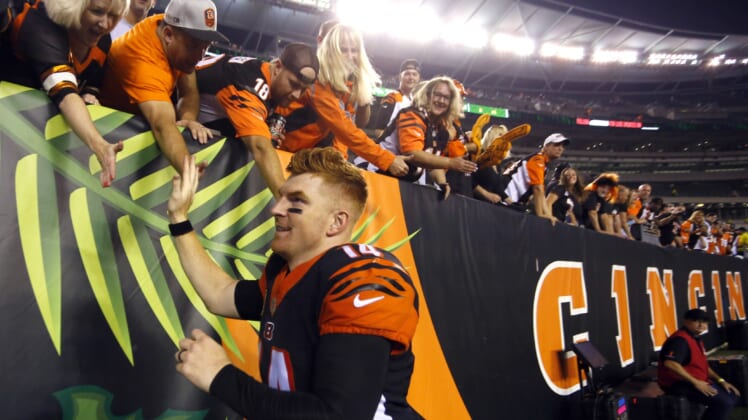 Now that we have had a couple of weeks to soak in both the good and bad patterns forming within each NFL team, it is the perfect time to make some predictions.

On the AFC side, four team have produced 2-0 records. We cover a couple of playmakers on each of those teams.

Not to ignore the NFC, there will be a classic division showdown between the New Orleans Saints and the Atlanta Falcons. Could this be the game that Julio Jones finally scores his first touchdown of the year?

These are among the bold predictions for NFL Week 3.

Combine the speed of Flash, the accuracy of quarterback Tom Brady and a clash with a Lions defense that have given up the highest points to date,  and Gordon should be primed to go off. This game has high scoring written all over it. This also likely means the Lions’ defense will be scrambling in an attempt to figure out who will emerge as Brady’s top target this week. They might not suspect it could be the newest member of the Patriots. We might also mention that Gordon has averaged an impressive 17.3 yards per catch throughout his career.

Vikings lead the Bills by at least 40-0 at halftime

This game is not about the Bills losing, but about how many points they will lose by. The Vikings should gain a humongous early lead when their electric offense takes the field. Then, it won’t take much effort for the Vikings’ defense to force three and outs. It is not unreasonable to predict the Vikings could score in the neighborhood of six touchdowns by halftime. Running back Dalvin Cook has a great shot at putting a couple scores on the board. It was just last week that Chargers running back Melvin Gordon scored three times against Buffalo. Adam Thielen and Stefon Diggs are no-brainers to grace the end zone multiple times as well.

The Seahawks’ offense is falling apart at the seams. Their last game (and loss) against the Chicago Bears was evidence of this pure and simple. Russell Wilson scrambled for his life all night. Meanwhile, head coach Pete Carroll decided to feature his underwhelming rookie Rashaad Penny while benching his starting running back. If the same chaos continues, the Dallas Cowboys’ defense is going to take advantage. This defense just sacked Eli Manning six times and held the Giants to 13 points. Kicker Sebastian Janikowski might be the only Seahawk putting points on the board this week.

This game is one of the most anticipated on the Week 3 schedule. Young quarterback Patrick Mahomes will face a 49ers defense that has already yielded five passing touchdowns in two games. Next, quarterback Jimmy Garoppolo squares off against a Chiefs team that has seen its defense give up a league-high average of 430 passing yards and three touchdowns per game. Jimmy GQ is primed for a monster outing. All the while, Mahomes will keep doing what he does best…throw touchdowns. Add in the talents of Kareem Hunt, Matt Breida and Alfred Morris on the ground, and more than 100 total points might be had.

Arizona Cardinals fans are outraged with the team’s decision to keep Sam Bradford playing while rookie Josh Rosen yawns on the sidelines. Not to mention, those who own running back David Johnson in fantasy football have been furious about Bradford not targeting his uber-talented running back. Things don’t look to get any easier for the Cardinals when they host the Bears in Week 3. This game could get ugly very fast considering the beating Chicago just unleashed on the Seahawks. Maybe to save a little face and to not see fans start throwing sharp objects, the Cardinals test Rosen late in the game.

The Bengals are off to a hot start, having already defeated both the Indianapolis Colts and Baltimore Ravens. Next up on the schedule is a road game against the Carolina Panthers. This is when we predict the Bengals once again prevail and it will be Cincinnati’s pass rush that impacts the game. The Bengals have already recorded six sacks in two games and they face a very sackable quarterback in Cam Newton. Newton’s offensive line is never shy to throw him to the wolves as he has already endured five sacks and nine total quarterback hits. Somehow, the Bengals’ defense will have the final say as the team improves to 3-0.

Eagles fans are thrilled that Wentz is finally back! We have not seen the young quarterback in action since last December. Now, Wentz has been cleared to play with the Eagles hosting the Colts on Sunday. We are going very bold here and suggesting Wentz — who could be a bit rusty — scores three touchdowns. Though, this would be quite the feat considering the Colts have allowed only two total passing touchdowns in two games. Just for fun, it would be cool for Wentz to hit up the newly re-signed Jordan Matthews for one of his scores.

The New York Giants and Houston Texans are both off to messy 0-2 starts. And, this game could turn into a defensive fist fight considering how poorly both offenses have been playing. While The Texans might possibly score on the ground or defensively, quarterback Deshaun Watson is not a sure bet to throw a touchdown. Despite losing two games, the Giants’ defense has given up only two passing touchdowns. Even better, opposing quarterbacks have completed just 58.6 percent of their passes against New York. The Giants are up for a bumpy ride, but they have a shot of gaining the upper hand.

Matt Ryan does not throw an interception and Julio scores

The Atlanta Falcons are coming off a win as they prepare to host the New Orleans Saints in Week 3. But, what Falcons fans can only hope is that Matty Ice does not throw for a third interception. He has tossed a pick in each game thus far. Going out on a limb, we say he has a clean performance on Sunday. Ryan stands an excellent chance of this considering the Saints’ defense has managed only one interception. On the other hand, the Saints have surrendered five passing touchdowns. Hence, the chances of Julio Jones actually scoring his first touchdown on the season are darn good.

Los Angeles Rams running back Todd Gurley has lived up to expectations and has scored a total of four touchdowns in two contests. Meanwhile, Pittsburgh Steelers running back James Conner has performed nicely as well, having scored three times. But this week, Conner has a chance to outdo Gurley in scoring, while playing the Tampa Bay Buccaneers in Monday Night Football. While the Bucs have been crazy-good on offense, their defense is giving up the farm. So far, opposing running backs have scored four times in two games. With the heat on for Pittsburgh to win, we will say Conner finds the end zone twice. Meanwhile, Gurley faces a Chargers defense that has only yielded one rushing touchdown.