Yanks scramble to put away surging Rays in AL East 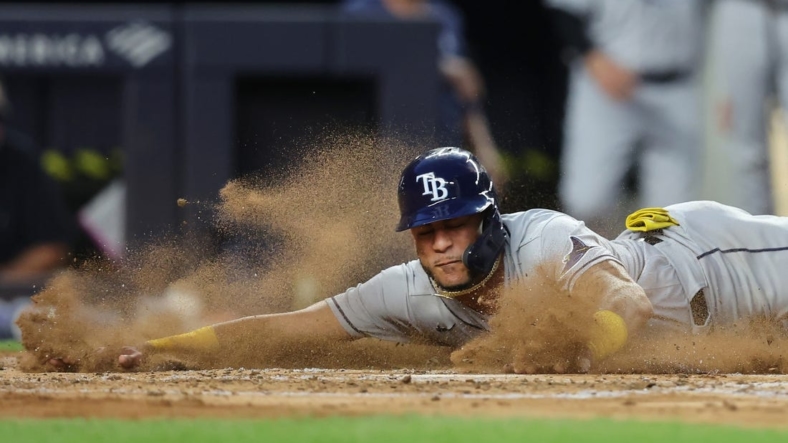 A month ago, a division title seemed like a mere formality for the New York Yankees and a distant dream for the Tampa Bay Rays.

Suddenly the division is hardly secure for the Yankees. The Rays get six chances in the next two weekends to create more pressure in the race starting Friday night when the American League East foes get together for the opener of a three-game series in St. Petersburg, Fla.

The Yankees began last month with a 14½-game lead over the third-place Rays. Now the lead is sliced to six games and Tampa Bay, in second place, has 33 games remaining while the Yankees have 31.

New York held a 15½-game lead following its 12-5 win in Boston on July 8, but since then it is 18-29. The Yankees completed a 10-18 August by producing underwhelming results with a 3-4 record against the Oakland A’s and Los Angeles Angels.

On Wednesday, the Yankees ended August by getting held to three hits in a 3-2 loss to the Angels, marking the 15th time since the break they scored two runs or fewer.

“So now we have to play better than we have,” Yankees manager Aaron Boone said. “It’s as simple as that. We’ve got to start racking up some wins. Whether the calendar has an eight or a nine or a 10 on it, we’ve got to get a little better.”

The Rays are returning home after a pair of wins over the Miami Marlins.

Manuel Margot hit the go-ahead single in the 10th inning in a 2-1 win Wednesday. Randy Arozarena had two more hits and batted .327 with six homers and 23 RBIs in August.

“We all know what the standings are right now,” Rays manager Kevin Cash said. “Everybody’s kind of clumped together. We just have to keep winning.

Coming off his two longest outings of the season, Domingo German (2-2, 3.19 ERA) will open the series for the Yankees. After allowing two runs (one earned) in 6 1/3 innings on Aug. 22 against the Mets, German allowed three hits in 7 2/3 innings Saturday in Oakland when the Yankees took a 3-2 loss in 11 innings.

German is 3-1 with a 6.32 ERA in nine career appearances (seven starts) against the Rays. He last faced the Rays on Aug. 17, when he allowed three runs in 4 2/3 innings in a no-decision.

The Rays have not yet announced a starter for the series opener, but whoever gets the nod is looking to continue a strong run of pitching for Tampa Bay.