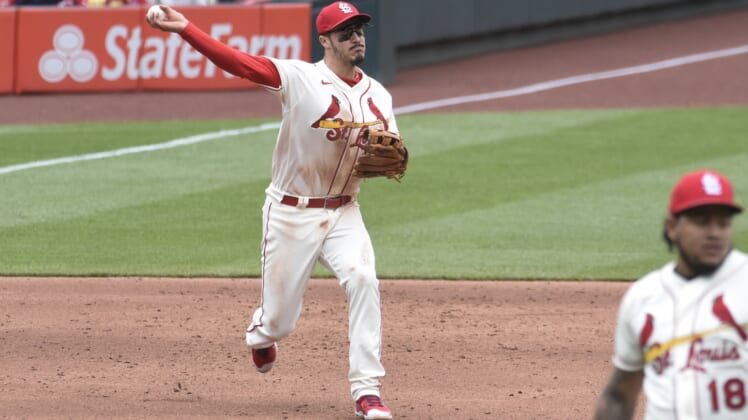 The Cardinals won for the eighth time in 10 games.

The Rockies lost for the 13th time in 15 road games this season and for the 24th time in in their past 28 games at Busch Stadium.

Raimel Tapia led off the game with a walk and scored on Ryan McMahon’s double for a Rockies 1-0 lead.

The Cardinals responded in their half of the inning. Tommy Edman, Dylan Carlson and Goldschmidt hit singles to produce a run.

Paul DeJong hit an RBI single and Molina, just off the injured list after recovering from a foot sprain, hit run-scoring grounder to make it 3-1.

Carlson was hit by a pitch leading off the third inning. Goldschmidt’s single, DeJong’s walk and Molina’s two-run single to put the Cardinals up 5-1.

Tapia got the Rockies rolling again in the fifth inning with a leadoff single. Trevor Story hit a double, Blackmon walked and a wild pitch produced one run.

But the Cardinals scored four times in the bottom of the inning. Carlson led off with a single and Goldschmidt crushed his 430-foot homer.

Nolan Arenado and DeJong followed with doubles to score another run. DeJong stole third base and scored on Tyler O’Neill’s sacrifice fly to make it 9-5.

Tapia hit an RBI double off reliever Giovanny Gallegos in the eighth inning to cut the lead to 9-6. Blackmon hit a two-run single off Reyes to trim that lead to 9-8.

But Reyes struck out the side in the ninth to seal the victory.