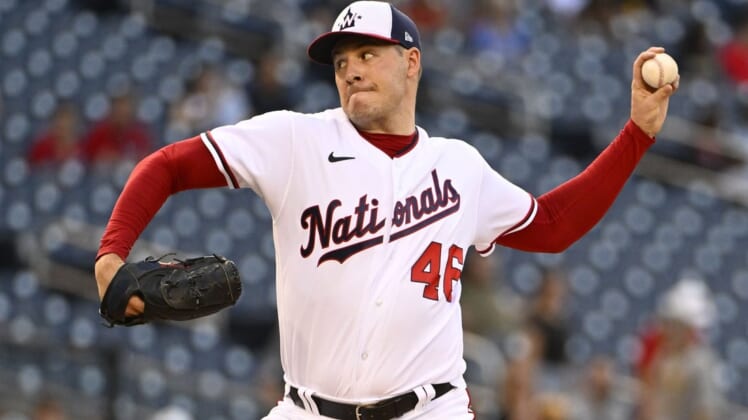 Pinch hitter Yadiel Hernandez smacked a two-run double with two outs in the eighth inning to lift the Washington Nationals to a 3-1 win against the Pittsburgh Pirates on Tuesday night.

Josh Bell beat out an infield hit leading off the eighth against Wil Crowe (3-5). After Nelson Cruz struck out, Luis Garcia pinch hit for Maikel Franco and grounded into a fielder’s choice. Cesar Hernandez drew a walk and Yadiel Hernandez sent a 0-1 change-up just beyond the reach of right fielder Diego Castillo and to the wall.

Patrick Corbin (4-10), who entered the game with a 6.60 ERA, was rewarded for his best effort of the season, giving up one run on five hits and two walks in eight innings. He threw 113 pitches and struck out 12 batters, his most since joining Washington in 2019 and matching his career high.

Tanner Rainey allowed a walk and a single before picking up his 11th save.

Bell had two hits for Washington, which has won three straight and six of eight.

Castillo homered and Ke’Bryan Hayes had two hits for the Pirates, who have lost five straight.

The first two Pittsburgh hitters of the night reached base on a single and a walk against Corbin, but the left-hander struck out the next three Pirates.

The Nationals got their only run against Quintana in the first inning. Juan Soto singled with one out, went to third on Bell’s double and scored on a groundout by Cruz.

Cesar Hernandez doubled leading off the Washington second, but Quintana struck out the next two batters. Victor Robles reached on an error and stole second, but Lane Thomas lined out.

Corbin was cruising until the sixth when Castillo hit his eighth homer of the season to make it 1-1.

It was the second straight night of eighth-inning heroics for Washington following Franco’s two-run homer in Monday’s 3-2 win.