10 biggest studs and duds in the NBA this past week

More than a quarter of the way through the NBA season, we have a darn good understanding of where most teams around the Association stand.

The Golden State Warriors are no longer undefeated. Meanwhile, the San Antonio Spurs are really putting on a show out west.

Back east, the Milwaukee Bucks are coming off a stellar win against the defending champs while struggles continue for a former MVP in Chicago.

Here are your 10 biggest studs and duds from the past week in the NBA. 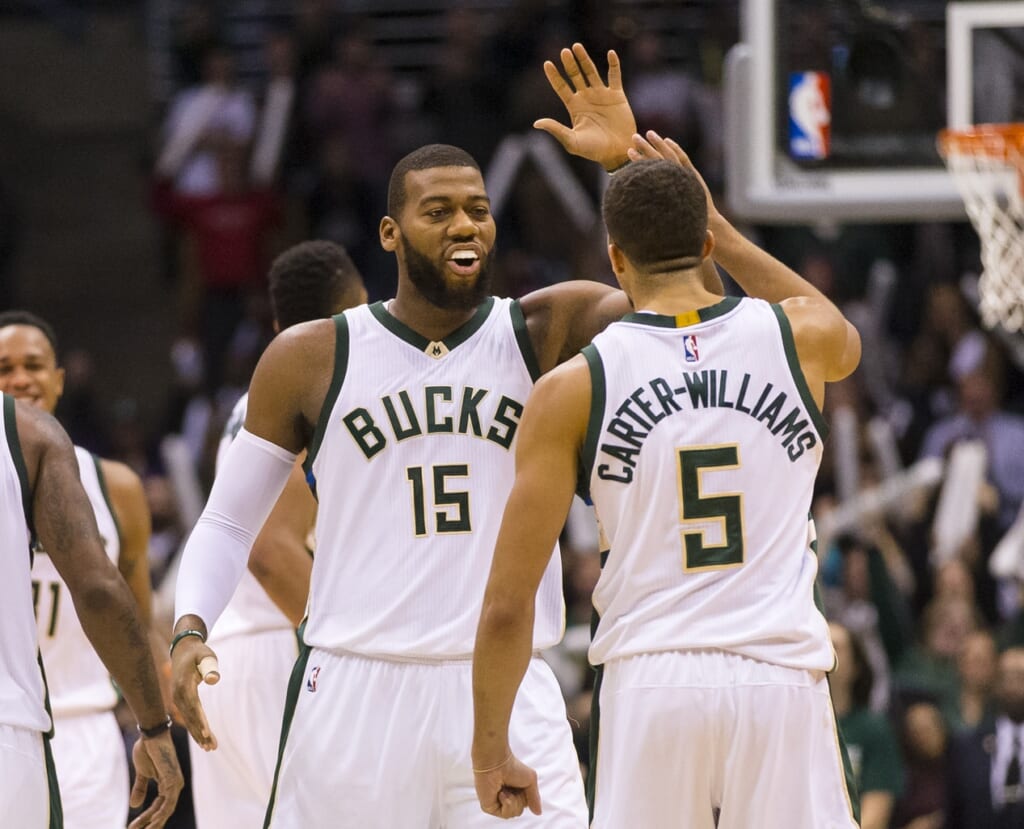 In no way does this mean that the Bucks are prepared to overcome their early-season struggles that have them at 10-15 heading into this week’s action.

Rather, it was all about a coming-out party for the team’s biggest free agent acquisition in years.

Taking on a dog-tired Golden State Warriors team on Saturday night, Milwaukee handed the defending champs their first loss of the season.

It was Monroe that did the heavy lifting against a Defensive Player of the Year candidate in Draymond Green. He hit on 11-of-16 shots from the field for 28 points while adding 11 rebounds and five assists in the 108-95 Bucks win.

Finally finding a way to mesh in with his new team, Monroe is averaging 18.2 points and about 11.0 rebounds in his past five games heading into the week. At the very least, that gives the Bucks something to look forward to.

Coming off the bench for the first time all season Sunday against the Miami Heat, this big man did convert on 6-of-9 field goals for 12 points while adding six boards.

This might have represented a change in philosophy for a Grizzlies team that’s been mired in mediocrity all season. Prior to Sunday’s game, Randolph was averaging 13.3 points and less than 10 rebounds in his previous nine games.

Some injury issues aside, Randolph simply hasn’t been the low-post presence we have seen in Memphis during its string of 50-plus wins in each of the past three years.

If Randolph continues to be relegated to bench duty, it will represent a dramatic regression from the double-double average he has put up in six of the previous seven years.

It might also force Memphis to try and find a trade partner in order to build another big three with Marco Gasol and Mike Conley.

While Green did struggle on the defensive end in Golden State’s first loss of the season on Saturday night, that could be summed up by the fact that he played nearly 50 minutes the previous night in Boston.

Offensively, Green was still able to add his second consecutive 20-plus point game while shooting 9-of-14 from the field.

Using a homophobic slur is about as bad as it gets in today’s society. Directing it at a homosexual doesn’t necessarily make it any better. That’s what Rondo apparently did when he called out NBA official Bill Kennedy during a game last week.

Kennedy then decided to come out publicly, days after the NBA suspended Rondo for one game.

On Monday, the Kings issued a public apology to Kennedy — an indication the organization is taking this issue seriously.

The always enigmatic Rondo was in the midst of a rebound campaign in his first season with Sacramento. This unneeded drama only adds to his reputation, and could further derail what was once a promising career. For this, Rondo is one of the biggest duds from the past week around the NBA.

We can no longer compare Kobe to the player he was four or five seasons ago. That time surely has passed. Putting up one of the worst shooting seasons in the recent history of the league, Bryant has actually found some youth within his damaged body recently.

In four games last week, the future Hall of Famer averaged 17.3 points, 5.5 rebounds and 3.8 assists per game while shooting 47 percent from the field.

As any basketball fan can attest to, watching the regression of Bryant earlier this season was about as depressing as it comes. The hope here is that he’s able to build off these recent strong performances and play at a decent clip for the remainder of the year.

The toast of New York, this talented rookie had put up some remarkable performances through the first quarter of the season.

In fact, the Latvian tallied nine consecutive double-digit performances with five double-doubles mixed in prior to the past three games.

Hitting a wall that seemed inevitable, and has been for most youngsters in their first NBA seasons, Porzingis struggled through three disastrous performances to end last week.

Including a zero-point outing against the Portland Trail Blazers on Saturday, Porzingis heads into this week averaging 5.7 points and 4.3 rebounds while shooting 24 percent from the field over his past three games.

It’s now all about Derek Fisher getting the rookie some rest here soon, at which point the big man should be prepared to return to earlier-season form.

Just Announced: @KDTrey5 of the @OKCThunder & @DeMar_DeRozan of the @Raptors named NBA Players of the Week! pic.twitter.com/Gex2PQMLeM

With Durant seemingly at 100 percent, the Thunder are a team to reckon with in the Western Conference. The forward’s recent performances magnifies this to a T.

Over the course of the past four games — all ending in Thunder wins — Durant is averaging 29.8 points, 8.8 rebounds and 6.3 assists per game while finishing with a combined plus-minus of 60. Those are some absurd numbers right there.

We aren’t close to putting Oklahoma City in the same category as the San Antonio Spurs and Golden State Warriors, but Durant’s recent play suggests that it might very well be there relatively soon.

It’s sad to see a 27-year-old player regress the way Rose has, but the former MVP just isn’t the same player he was prior to myriad of injuries he has suffered over the past several seasons.

Likely the fourth or fifth-best player on the Bulls, Rose’s recent performance has left a lot to be desired.

Including a six-point performance against the lowly Philadelphia 76ers on Monday, Rose is averaging 9.5 points and 3.8 assists over his past four games.

More than this, he’s playing in an average of less than 30 minutes while committing a total of nine turnovers during that span.

It might actually be time for head coach Fred Hoiberg to move on from giving Rose substantial minutes. That is where we are at right now.

Despite a poor shooting performance (7-of-18) against the Indiana Pacers on Monday, DeRozan has still played some darn good basketball recently.

He has put up 20-plus points in each of the past four games, averaging 25.0 points per game during that span. This recent performance had Toronto riding a four-game winning streak prior to Monday’s loss with nine wins in its past 14 games.

That’s the type of success Toronto needs to duplicate moving forward. After struggling against elite competition earlier in the season, the Raptors’ schedule is much more favorable in the coming weeks.

With DeRozan playing a high clip, things should start looking up for this squad. 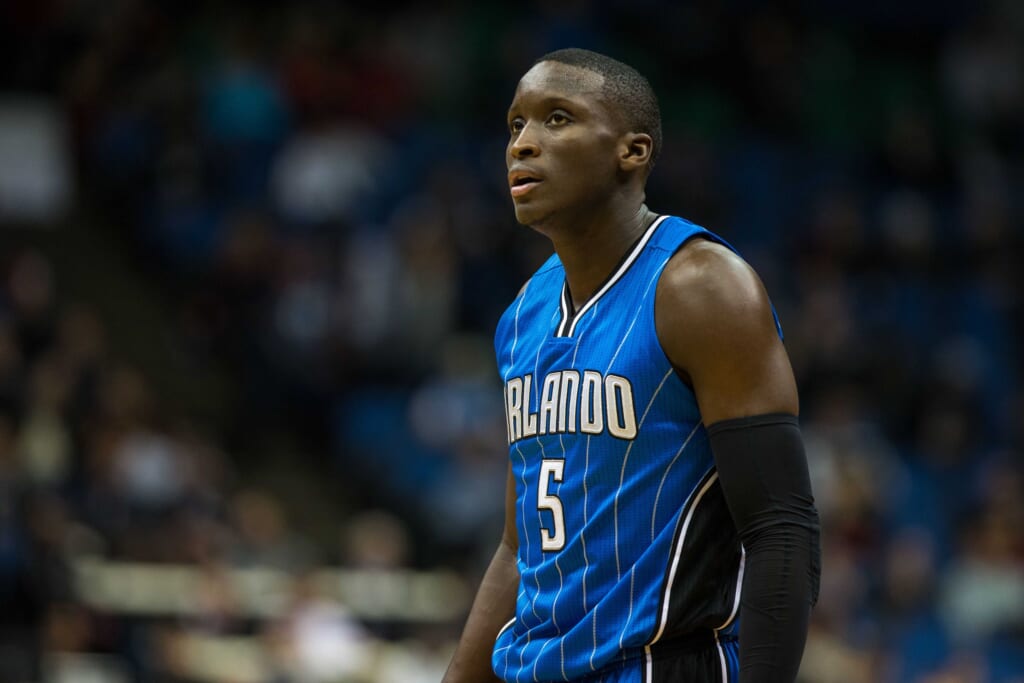 Erratic would probably be the best term to describe this athletic wing in what has been an up-and-down third season in the NBA. Coming off a 10-point performance against the Brooklyn Nets on Monday, Oladipo is averaging single digits over the past four games.

A mediocre Magic team needs one of its most-athletic players to continue creating mismatches on the offensive end of the court. That’s something this Indiana product simply hasn’t been able to do.

And in reality, it’s relegated him to about 20 minutes per game over the past couple outings.

Check out Vincent’s other work on eDraft.com and follow him on Twitter. His work can also be seen on MSN, Fox Sports and Forbes.