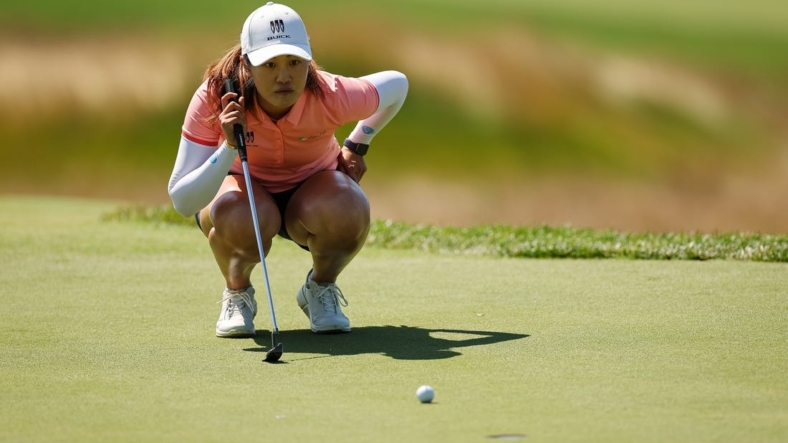 Xiyu Lin of China birdied six of her first nine holes en route to an 8-under-par 64 to take the lead after one round of the inaugural Kroger Queen City Championship on Thursday in Cincinnati.

Lin began on her round on the back nine and rolled in birdies on Nos. 10-12, then again at Nos. 14 and 15. She birdied all four par-3 holes on the course and got away with just one bogey.

The 26-year-old, who has yet to win on the LPGA Tour, said she only got to play nine practice holes at Kenwood before the tournament due to poor weather in the area.

Hataoka’s round featured three straight birdies at Nos. 14-16 to shoot up the leaderboard late.

“I think I was able to be able to control, manage the course,” Hataoka said. “It’s not very long, so I was able to do the 3-woods really well.”

Kemp also started on the back nine and made the turn on a down note, having bogeyed Nos. 17 and 18. She turned it around with a 5-under 31 on the front nine.

The 36-year-old is looking for a good result to boost her up the Race to the CME Globe standings late in the year. She ranks just 100th entering the week. She’s also having her wife Lisa caddie for her this week.

“I think Lisa had a really big factor into that today,” Kemp said. “That’s why I wanted to finish the year with somebody like her on the bag. Yeah, I really want to keep my job. I don’t want to have to go back to Q-School.”

Of the top 10 players through Round 1, only Choi and Jutanugarn carded bogey-free rounds.

World No. 3 Minjee Lee of Australia, the highest-ranked player in the field and the Race to the CME Globe points leader, opened with a 4-over 76.