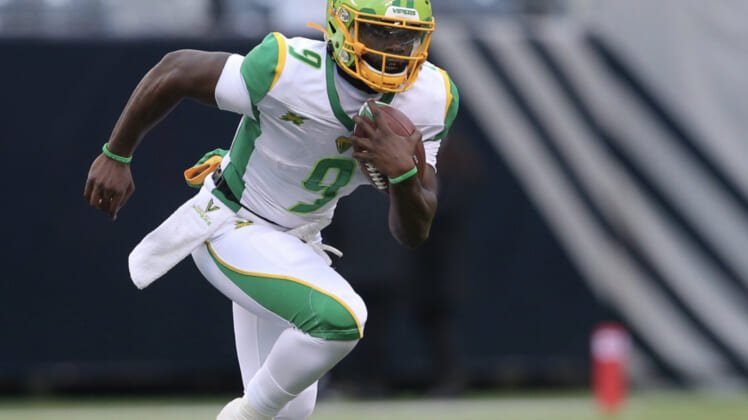 The initial week of XFL action saw some surprising outcomes and a rather good product. Interest was high one week after the NFL season ended. That’s what founder Vince McMahon was hoping for.

On the field, the Los Angeles Wildcats already shook up their staff by firing defensive coordinator Pepper Johnson. How will that help them against another struggling team in that of the Dallas Renegades?

In D.C., Cardale Jones proved his worth as an early MVP favorite last week. How will he do against a good New York Guardians defense as the Defenders look to go 2-0?

These are among the top storylines for Week 2 of the NFL season.

Will shake up in Los Angeles change things?

Now set to make their debut in Southern California this weekend, one has to wonder whether the firing of Johnson will change things. The good news here is that the Wildcats take on a Dallas Renegades team that disappointed in a loss to the St. Louis BattleHawks last Sunday.

Both the DC Defenders and New York Guardians are coming off tremendous season-opening wins. DC rode the passing prowess of MVP favorite Cardale Jones and a ball-hawking defense to a 31-19 win over the inept Seattle Dragons. In fact, two interceptions of Brandon Silvers did the trick to change the momentum in the second half.

On the other side, Matt McGloin did just enough for his Guardians to take out the league’s worst team in that of the Tampa Bay Vipers by the score of 23-3. Relying on defense and a solid rushing attack, it’s an open question whether New York’s style is sustainable in the XFL. Either way, this matchup between two east coast teams with an NFL rivalry backdrop promises to be interesting.

Back in early 2015, this former Baylor standout was the talk of the NFL Draft community. Then a 6-foot-9, 275-pound physical freak and a mountain of a man, all indications were that the edge rusher would be a top-five pick. Oakman then struggled through the 2015 season and found himself embroiled in a sexual assault case. He was ultimately found not guilty after a grand jury indicted him.

Now one of the most impressive defensive performers from Week 1 (two quarterback hits, one sack), it will be interesting to see if the Los Angeles’ defensive lineman continues to show out against the Renegades. Still only 27 years old, it could potentially put him on the radar of NFL teams.

Time for the Vipers to roll with Quinton Flowers

Former Georgia and Kansas City Chiefs quarterback Aaron Murray was absolutely atrocious in his debut last week, completing less than half of his passes and throwing two interceptions in a blowout loss to the New York Guardians. Murray doesn’t belong anywhere near a football field. It led to fans calling for struggling Tampa head coach Marc Trestman to go with Flowers full-time.

We’re here to say that has to be the case in a must-win game against an equally bad Seattle Dragons team Saturday evening. The Vipers don’t have the talent to compete with the big boys in the XFL. Having a dynamic, dual-threat quarterback under center could narrow the talent gap some. After receiving a ton of criticism last week, Trestman must go with Flowers full-time.

The inaugural week of XFL action went off without a hitch. Fans seemed to be excited. The league topped Twitter trends throughout the weekend. Over three million people tuned in to the first game between the Dragons and Defenders in D.C. Needless to say, the powers to be within the XFL had to be happy about the initial week of action.

Now heading into Week 2, one has to wonder if last weekend was nothing more than a novelty. Will it wear off as the season progresses? We’re not 100% sure how that’s going to play out. What we do know is that tickets for the Defenders game are more expensive than what we saw with the NFL’s Washington Redskins last season. Meanwhile, ticket prices in general for Week 2 have increased significantly from the debut slate of action. It will be interesting to see if this weekend’s action draws as much interest.

Dallas headed into Week 1 as the consensus best team in the XFL. Without Landry Jones in the mix, Stoops and Co. struggled big time in a 15-9 loss to the St. Louis BattleHawks. Now that Jones could return to action this week, we’re highly intrigued to see if Stoops’ spread offense can have success.

It should be a much easier game for the Renegades against a Los Angeles team that gave up a league-high 37 points last week and just fired its defensive coordinator. If the former Oklahoma head coach struggles this week, it could be a harbinger of things to come as the season progresses.

Phillip Walker looks to pick up where he left off

Sunday night’s game between the St. Louis BattleHawks and Houston Roughnecks is probably the best matchup of Week 2. It pits a St. Louis defense that gave up just nine points to Dallas last week against a Roughnecks offense that scored a league-high 37 points.