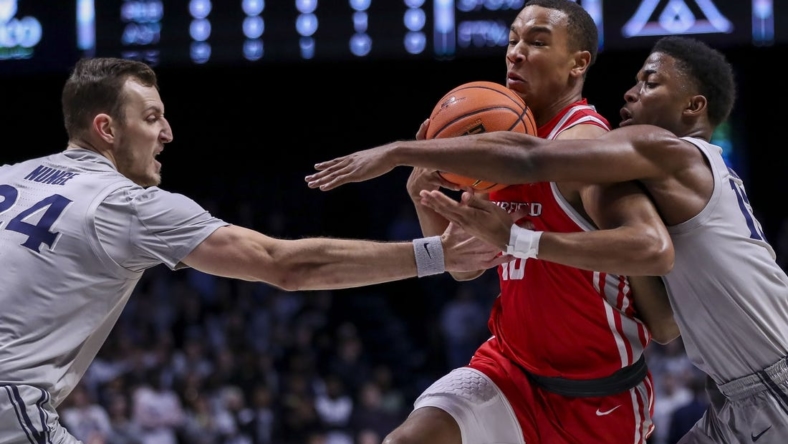 Jack Nunge scored a game-high 23 points and sparked a second-half surge to rally Xavier past visiting Fairfield 78-65 on Tuesday night in Cincinnati.

Adam Kunkel added 21 points while Zach Freemantle turned a triple-double with 15 points, 13 rebounds and 10 assists as Xavier won its third straight on a season-opening four-game homestand.

Nunge and Freemantle brought the crowd to its feet several times in the second half with putback layups and dunks as Xavier doubled Fairfield in the paint, 44-22.

Supreme Cook scored 19 on 8-of-11 shooting to lead Fairfield, which lost its third straight to open the season. Caleb Fields added 14 points for the Stags, who will play five more away from home before opening their new on-campus arena on Dec. 3 vs. Saint Peter’s.

Xavier came in heavily favored, but the Stags were not intimidated by the Big East foe as they drove to the basket early and often, building a 17-7 lead before a hushed Cintas Center crowd.

Fairfield led 23-14 on Cook’s jumper with 9:35 left in the first half before Xavier responded. The Musketeers scored the next 11 points, taking their first lead when Souley Boum was fouled on a layup and converted the free throw for a 25-24 Xavier lead with 6:59 left in the half.

Kunkel drained a 3-pointer and a layup that gave Xavier its largest first-half lead, 29-25, before Fairfield closed the half on a 12-6 run to take a 37-35 advantage.

The Stags claimed a 41-38 lead on Cook’s jumper just 1:22 into the second half. But Nunge’s dunk a minute later sparked a 12-4 spurt to put Xavier ahead for good.

Fields threw down a dunk with 9:35 left to cut the Fairfield deficit to five, 57-52, before Xavier responded with a 13-5 spurt to put the game away.