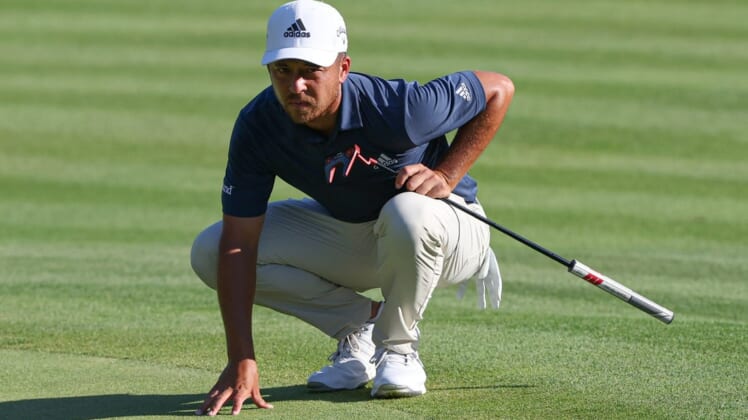 Xander Schauffele carded his worst round of the tournament Saturday but maintained a one-stroke lead at the Travelers Championship in Cromwell, Conn.

Schauffele fired a 3-under par 67 in the third round at TPC River Highlands to sit at 17-under 193 heading into Sunday’s final round. He opened 63-63 to hold the 36-hole lead.

Sahith Theegala (64) sits solo third at 14 under, three shots back, and Kevin Kisner fired a 66 to drop into fourth place four shots back. Two plays are tied for fifth, five shots off the lead.

Schauffele turned in a mild card after his whirlwind opening two rounds, putting together four birdies against a bogey.

“A little slow,” Schauffele said about his round. “I thought I was pretty steady for the most part. … For the most part I knew it wasn’t going to be easy to protect a lead, especially when it’s five shots and it’s easy to get comfortable. … So, I got to make a few more birdies tomorrow.”

Conversely, Cantlay recorded a bogey-free 63, the low round of the day in pursuit of his eighth career tour victory. He had seven birdies.

“I thought I played really well today,” Cantlay said. “I think lowest of the day. No real mistakes. I could have made a few more putts, but all in all it was a great round.”

Theegala, 24, seeks his first title on tour in his 38th start to become the second rookie winner this season. He turned in an eagle to go with five birdies against one bogey for a career-best, 54-hole score of 196.

“I’m definitely going to be nervous, definitely going to be excited,” Theegala said, looking ahead to the final round. “It’s so nice having prior experience kind of being near the top. So I know exactly what to expect. And every single week I’m out here I feel like I’m getting more and more comfortable. So I’m really looking forward to tomorrow.”

First-round co-leader Rory McIlroy of Northern Ireland shot 72 on Saturday to drop 24 spots into a tie for 31st at 6 under.