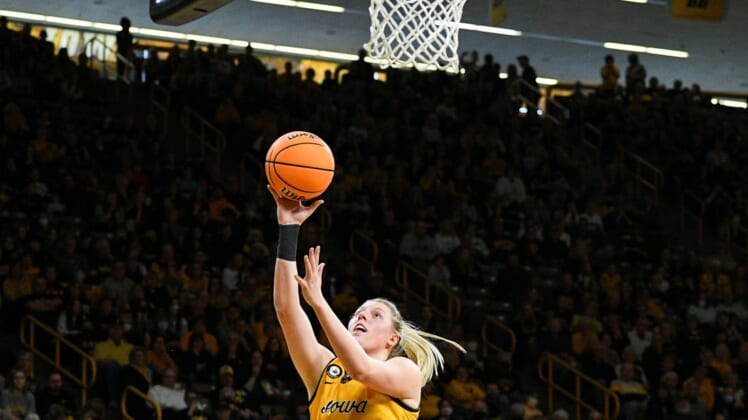 Lauren Jensen hit a 3-pointer with 12.6 seconds left to give Creighton a late lead and the Bluejays held off the second-seeded Hawkeyes for a stunning 64-62 upset Sunday in the second round of the Women’s NCAA Tournament in Iowa City.

The win puts 10th-seeded Creighton (22-9) in the Sweet 16 for the first time in program history. Jensen finished with 19 points and seven rebounds.

The Bluejays will face the winner of No. 3 Iowa State and No. 6 Georgia on Thursday in Greensboro, N.C.

Hailey Van Lith scored 15 of her 21 points in the second half to lead the Cardinals (27-4) to their fifth straight Sweet 16 appearance, 11th overall under coach Jeff Walz. After leading 36-32 at halftime, Louisville outscored Gonzaga 20-12 in the third quarter behind 10 points on 3-of-4 shooting from the field by Van Lith. The Bulldogs (27-7) were led by Kayleigh Truong’s 14 points.

Hannah Sjerven had a game-high 16 points and the Coyotes’ defense limited Baylor to 31.5 percent shooting from the field in the upset at Waco, Texas, that advanced South Dakota (29-5) to its first Sweet 16 in program history. Baylor (28-7) had its lowest scoring output of the season. The Bears shot 5 of 26 from 3-point range. NaLyssa Smith, a two-time All-American at Baylor, finished with 10 points and eight rebounds.

The Gamecocks (31-2) survived their worst shooting performance of the season (29.5 percent) to beat the Hurricanes in Columbia, S.C., for their eighth straight trip to the Sweet 16. National Player of the Year favorite Aliyah Boston also had her worst shooting mark of the season — 4 of 15 for 26.7 percent — but still finished with 10 points and 16 boards for South Carolina for her nation-leading 27th double-double of the season. Maeva Djaldi-Tabdi finished with 15 points for Miami (21-13).

Aaliyah Moore made 9 of 10 shots in an off-the-bench effort, scoring 21 points to lead the Longhorns (28-6) past the Utes in Austin, Tex. Rori Harmon had 11 points and eight assists as she broke Texas’ single-season assist record for a freshman. Utah (21-12) was led by Kennady McQueen’s 18 points.

Diamond Miller stuffed the stat sheet with 24 points, nine rebounds, three assists and three steals as the host Terrapins beat the Eagles in College Park. Maryland (23-8) ended the second quarter on an 11-0 run, and started the third on an 18-5 stretch, to pull away. Kendall Spray’s 17 points led FGCU (30-3).