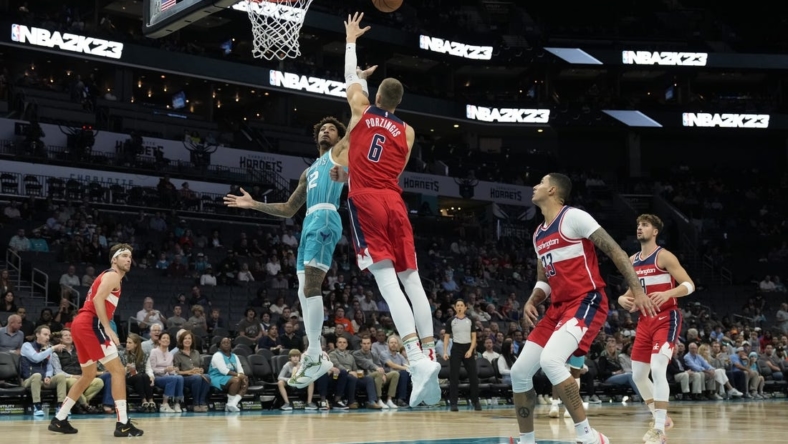 Kyle Kuzma scored 20 points and made key baskets down the stretch as the Washington Wizards put aside recent struggles to capture a 108-100 road victory against the Charlotte Hornets on Monday night.

Kristaps Porzingis poured in 19 points to help Washington on the interior in a game when the Wizards shot just 5 of 19 (26.3 percent) on 3-point attempts.

Reserves Jordan Goodwin and Rui Hachimua scored 17 and 16 points, respectively, for the Wizards. Washington won for just the second time in its last seven games.

The Hornets received 25 points from PJ Washington, 20 points from Kelly Oubre Jr. and 19 from Terry Rozier, but lost their fifth in a row.

The Wizards won despite standout guard Bradley Beal missing his second straight game due to health and safety protocols. Despite changes in the backcourt, the Wizards were charged with only 14 turnovers.

Kuzma scored a pair of baskets in a one-minute span as the Wizards built a 96-89 edge with less than 3 1/2 minutes left.

Porzingis dunked for a 102-89 lead to cap an 8-0 spurt that concluded with about one minute to play. Washington responded with a three-point play for the Hornets, but by then the Wizards had gained control.

The Wizards made four consecutive free throws to help seal the outcome.

Charlotte’s reserves combined to score only 27 points, with nine of those from Jalen McDaniels.

Despite playing a night earlier at Memphis, the Wizards got off to a solid start with a 26-18 advantage after the first quarter.

The Hornets recovered and held a 48-46 edge at halftime.

Charlotte played another game without point guard standout LaMelo Ball, who has been out since the start of the season due to an ankle injury. Starting point guard Dennis Smith Jr. managed only three points, though he delivered 10 assists.