Winners and losers from ‘Monday Night Football’ in Week 7 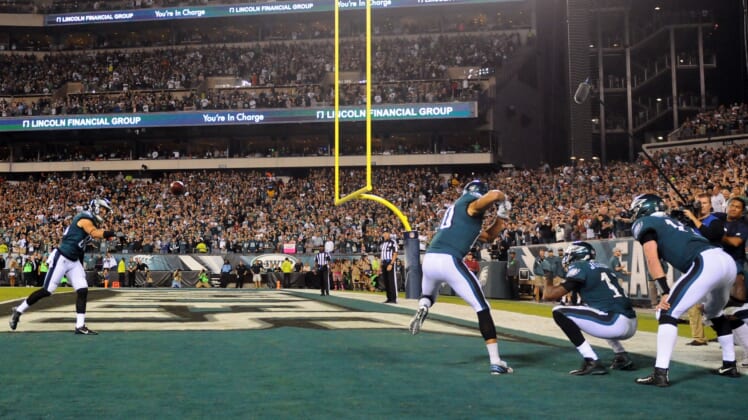 The Philadelphia Eagles hosted the Washington Redskins for “Monday Night Football” in Week 7, and the NFC East rivalry game ended up being pretty one-sided.

Carson Wentz and Co. survived a rough start to come out smelling like roses, and the second-year quarterback showed he’s growing up fast. In the end, the scoreboard read 34-24 in favor of the home team, but the outcome was never in doubt after halftime.

These were the biggest winners and losers from “Monday Night Football” in Week 7.

Make no mistake, Carson Wentz was assaulted on a regular basis on Monday night. Washington’s defenders hit him six times and brought him down hard in the process. One of the biggest hits he took occurred in the first half, right before he ripped off a gorgeous throw that went for a 64-yard touchdown to rookie Mack Hollins, the first of his career (watch).

In the second half he was literally being hit when he unleashed his third touchdown of the game, and then later in the fourth, he somehow magically escaped a veritable prison made up of Washington defensive linemen, turning a guaranteed sack into a 17-yard gain (watch here).

Due almost solely to Wentz’s unbelievable athleticism, grit, instincts and phenomenal skill, a close game turned into a blowout the Redskins were helpless to recover from.

Wentz finished the contest with 331 total yards, four touchdowns and one early interception.

It’s understandable that Washington struggled to run the ball Monday night. To a certain degree, that is. After all, the team’s offensive line has been beset by injuries, which we’ll get to shortly. But the fact that Jay Gruden went away from his running game so completely is something we cannot overlook.

Robert Kelley and Chris Thompson combined to run the ball just 14 times all game. Kelley, who’s coming off an injury, was slow and ineffective, averaging just 2.3 yards per attempt.

But Thompson, one of the most explosive running backs in the league, was much better, at 5.4 yards per clip. The fact he only got seven chances to tote the rock is criminal. It’s clear this is a guy who needs 20-plus touches every single game. He did catch all five passes that went his way, going for 26 yards and one touchdown.

Because the Redskins couldn’t/wouldn’t run the ball consistently, they went 4-of-12 on third downs, which was a big reason Philly was able to gain a lead and sustain it.

Winner: Zach Brown had a huge night in defeat

It wasn’t a great night for Washington’s defense, which was repeatedly torched by Wentz. But one man had a humongous night, and we’d be remiss if we failed to mention it.

Linebacker Zach Brown, who was celebrating his birthday no less, was on fire.

Recording double-digit tackles for the fourth time this year (he’s had no less than eight in all six games this year for Washington), Brown finished with 13 tackles (10 solo), 1.5 sacks, four tackles for a loss and two quarterback hits.

It stinks Brown wasn’t able to celebrate his birthday with a win, but we cannot fault him for the loss.

It was awful for everyone involved to see so many big men writhing on the ground in pain.

Jason Peters — a nine-time Pro Bowler, three-time First-team All-Pro and one of the best linemen of his generation, was carted off with what looked to be a very serious leg injury. Eagles linebacker Jordan Hicks might be done for the year, too, after being carted off very early in the game.

Redskins offensive lineman Morgan Moses had to be helped by two of his teammates off the field at one point, and he was banged up with an ankle injury all night. Brandon Scherff suffered a knee injury and was in clear agony on the field afterwards. Trent Williams, who’s been dealing with a knee injury, was clearly not 100 percent.

Injuries are a part of the NFL that is unavoidable. But it was a particularly rough night for them, especially for the big men in the trenches.

It was a banner night for Washington tight ends. Vernon Davis got the game started off with a huge 31-yard reception that set up the game’s first points. He ended up hauling in four total passes for 67 yards and continues to defy Father Time at the age of 33.

Jordan Reed had the best game of his season after spending much of the first half dealing with a nagging toe injury. He finished with eight catches for 64 yards and two touchdowns. So, while there wasn’t a lot to get excited about offensively for Washington, the tight ends performing well provided a silver lining.

Loser: Penalties remain a problem for the Eagles

We harped on the Eagles for their lack of discipline during a Thursday night game earlier this month. And while many fans didn’t appreciate that — they pointed to Pete Morelli’s crew as the reason — the truth is the Eagles really do struggle with penalties.

Never was this more crystal clear than on their first offensive possession of the game, when they were penalized four times in a span of three snaps. Seriously.

I have to think 4 penalties on 3 snaps is a record. They REALLY didn't like that Morelli petition, did they?

Philly ended up having nine penalties accepted against them for a total of 55 yards. These are the things Doug Pederson really does need to get cleaned up as the season moves into the second half and the Eagles attempt to stay atop the NFC.