Winners and losers from ‘Monday Night Football’ in Week 2

Monday Night Football in Week 2 featured two teams that many pegged to compete for the NFC title in 2017, but it’s hard to say either of them played like it.

The Detroit Lions, visiting the New York Giants, pulled out a rather easy 24-10 win, much to the consternation of Giants fans, who booed their team on multiple occasions.

It’s safe to say there was more ugly football than bright spots to talk about. However, a few players did brighten the mood with some fantastic work.

When the Detroit Lions selected Eric Ebron with the No. 10 overall pick of the 2014 NFL Draft, the expectation was that he’d instantly provide a spark for Detroit’s offense. While he certainly provided a spark at times, injuries and inconsistencies plagued him his first couple of seasons. Ebron did show a bit of what he’s capable of last year, racking up 61 catches. But he only managed one touchdown.

In the first half Monday night Ebron was a Giants killer. He caught five passes for 42 yards, including a terrific touchdown reception on a play in which Matthew Stafford had to scramble outside the pocket. This was the play that put the Lions up by a touchdown, which was all the cushion they’d need the rest of the way.

Though Ebron didn’t contribute any more catches in the second half, his efforts in the first sparked the win for the Lions.

Eli Manning and Stafford were running for their lives most of the night. Both teams struggled to protect their quarterbacks, with the two left tackles — Greg Robinson and Ereck Flowers — making particularly egregious mistakes on a regular basis.

Here are just a few instances in which Robinson and Flowers were taken behind the woodshed.

In addition to the multiple easy sacks given up were the penalties incurred, especially by Robinson who seemed to rack up a baker’s dozen.

What’s truly remarkable about both of these guys is that they were both high draft picks. Robinson was selected No. 2 overall back in 2014 by the then St. Louis Rams. Flowers was picked up by New York with the ninth pick a year later. Both players were just awful Monday night.

Flowers was so bad that at one point Manning literally waived the white flag and fell to the ground before Ziggy Ansah could get to him (watch here). The Giants have no better options they can fall back on. They’re stuck.

At least the Lions won’t have to rely on Robinson all year, as left tackle Taylor Decker will return from injury at some point this season.

For the second game in a row, Detroit Lions placekicker Matt Prater made an unbelievable kick.

During the team’s Week 1 game, Prater drilled a 58-yard kick to help the Lions beat the Arizona Cardinals. Then on Monday night, he had just enough leg to get it through the uprights from 56 yards.

And when we say “just enough,” this is what we mean.

This kick helped the Lions take a 10-point lead over the Giants Monday night. His two long kicks this year are the two longest in the NFL, though Dan Bailey of the Dallas Cowboys also has a 56-yarder.

Odell Beckham Jr. suited up on Monday night but wasn’t able to play all that much. The Giants needed someone on the outside to step up. This is what Brandon Marshall was brought in to do. But through two games he’s been awful. He caught just one pass on five targets against the Lions, which is bad enough.

Then there was the drop early in the fourth quarter. The Giants were down by seven points at this point. Marshall broke open down the right sideline. Manning hit him, almost perfectly in stride, dropping the pass right in Marshall’s hands.

We’ve been critical about the New York Jets for a number of legitimate reasons the past few years. That said, we can confidently say letting Marshall go this offseason was a win for that rebuilding franchise. Now he’s the Giants’ problem. And the big problem right now is that Marshall is either invisible or making mistakes right now for Big Blue.

We already detailed how awful Flowers was at left tackle. That said, it was pretty sweet seeing Ansah back in action and looking like the same kid who was so coveted coming out of BYU in 2013. Displaying his signature quickness, strength and speed off the edge, Ansah racked up six solo tackles, three sacks, forced a fumble and was generally just dominant.

For a guy who spent most of the summer banged up and who barely registered as a blip on the radar last weekend against Arizona, this was a welcome sight. The Lions have needed someone to step up ever since Kerry Hyder was lost for the year during the preseason. Maybe this means Ansah is finally ready to be that guy again.

Loser: Ben McAdoo is fooling nobody 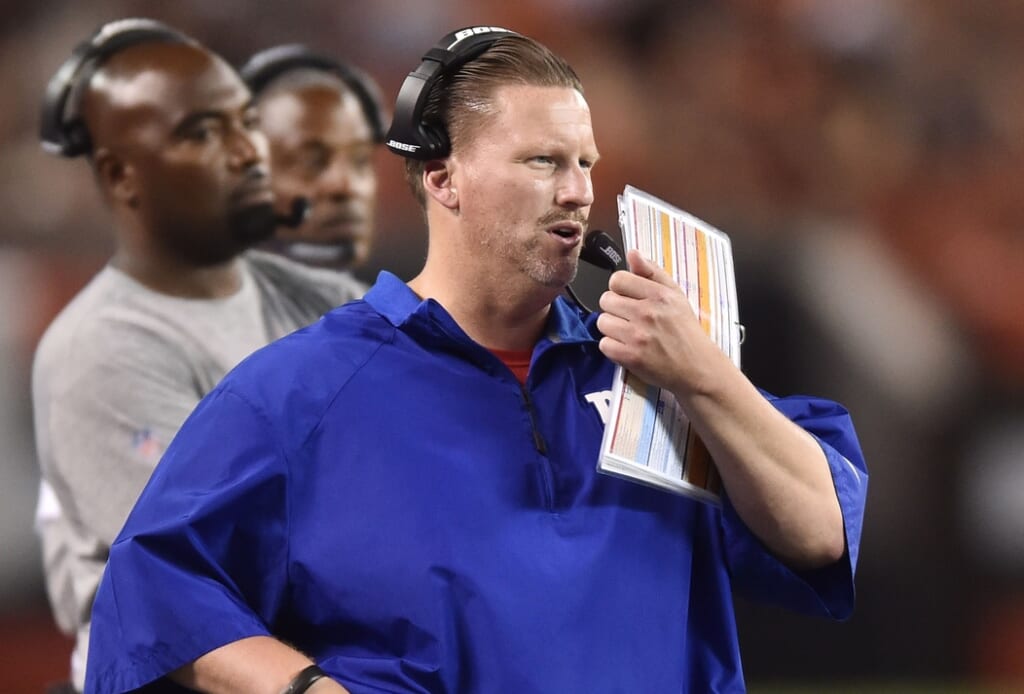 You know that huge play-call sheet Giants head coach Ben McAdoo sports? The one that looks like a restaurant menu?

Yeah, it’s not helping. Starting from the first series of the game when he called a draw play on third-and-13 and going all the way to the end when Eli Manning threw an eight-yard route to Odell Beckham Jr. on fourth-and-10, McAdoo’s play calling was awful.

The Giants almost always run the same sets. The offense is extremely predictable. They almost always pass more than they run, even when Manning is getting obliterated. Even when Sterling Shepard and Brandon Marshall are invisible. The only player who has really made McAdoo look like a genius the past couple of years is Beckham Jr. And he’s just amazing, turning simple slants into touchdowns and catching balls that most players couldn’t dream of hauling in.

Last year the Giants won 11 games because their defense was incredible. It’s only two games, but right now the Giants look like they’ll be lucky to finish at .500.

After another uninspiring New York offensive possession early in the fourth quarter, with the game still within reach for Big Blue, one man ended those hopes. The Lions were up by a touchdown. Then Brad Wing punted the ball to Jamal Agnew.

Agnew put the entire New York coverage team on skates. Literally, guys were falling down trying to lay a finger on him. Eighty-eight yards later it was a two-touchdown game (watch here).

Loser: Fans having to endure so much bad football

It’s been such a common theme in recent years. The folks putting together schedules always try to provide fans with compelling prime-time matchups. But too often those plans are being laid waste by awful football.

While there were some big plays to spice things up a tad, what we witnessed Monday night was not what you’d expect from two top NFL teams. Of course, as we touched on Sunday night, there really aren’t very many of those in the league right now. The overall quality of play is not exceptional. It’s exceptionally bad at least as often, which just stinks.