Winners and losers from ‘Monday Night Football’ in Week 12

The Baltimore Ravens hosted the Houston Texans on Monday Night Football in Week 12, and it was one of the ugliest prime-time games we’ve seen in a while.

Both teams struggled to do much on offense, though there was one standout performer we’ll highlight in a moment.

Tom Savage is the quarterback equivalent of a bag full of lemons, especially compared to what the Texans and their offense experienced with rookie Deshaun Watson.

Savage was awful on Monday night, which we’ll get into a bit more later on. But the quarterback’s poor play couldn’t stop DeAndre Hopkins from having a monster game — he constantly makes lemonade out of his bag-of-lemons quarterback.

He ended up catching seven passes for 125 yards, putting him right up there with the best in the league.

#Texans WR DeAndre Hopkins has surpassed the 1,000-yard mark this season, one of four receivers to do so through 11 games

Hopkins is a rare player who has somehow put up crazy numbers even when playing with sub-par quarterbacks. He’ll need to continue doing so the rest of the year, because it’s clear the Texans don’t have a quarterback on the roster capable of playing well on a consistent level.

Loser: The Ravens’ passing game is an abomination 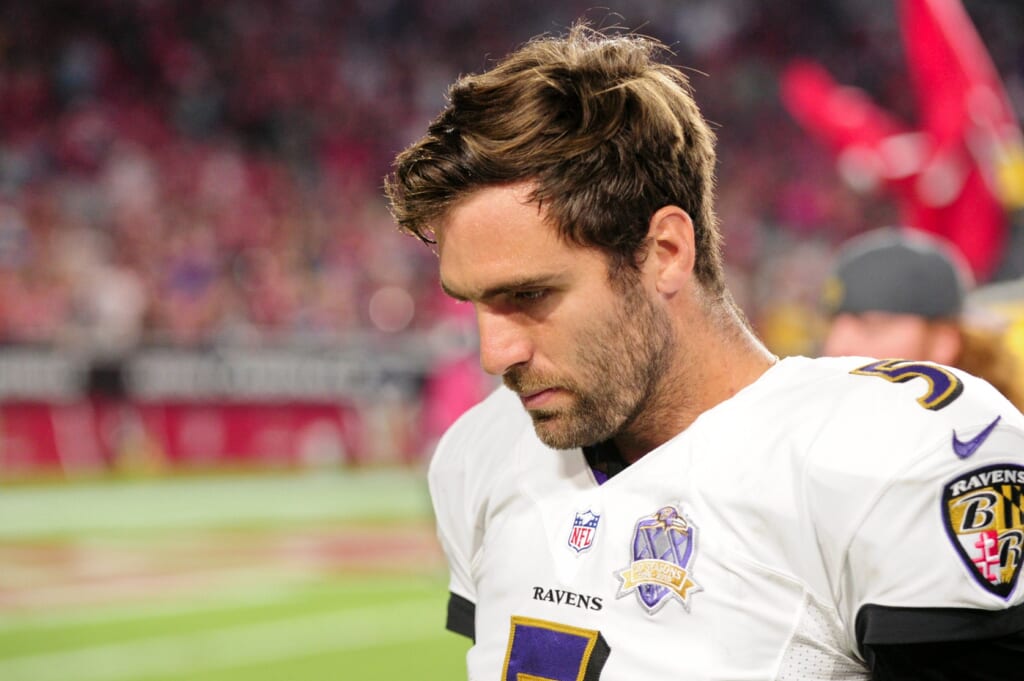 In an era when so many quarterbacks regularly eclipse the 300-yard mark, Joe Flacco breaks the mold. Counting Monday night’s ugly affair in Baltimore, he still has yet to pass for 300 yards one time all year.

Against Houston, Flacco was nauseatingly awful. He completed 20-of-32 passes but went for just 141 yards with no touchdowns.

It’s the seventh time in 11 games this year in which Flacco has actually failed to pass for 200 yards, which really highlights the team’s inability to make plays through the air. Granted, the team’s receivers are to blame for some of this, as drops were a factor Monday night and have been all year.

Down by a touchdown early, at the Houston 41-yard line, John Harbaugh went with his gut rather than his head and called for a fake punt. Flub it, and you’re setting your opponent up for a short field and potential two-score lead.

Punter Sam Koch didn’t miss his chance to shine. Needing just six yards for a first down, he threw a beauty of a pass to Chris Moore that went for 22 yards (watch here). In fact, it could be argued this was the prettiest pass of anyone throwing the pigskin around on this night.

The play set up Baltimore for its first score of the game. Jarvorius Allen rode a convoy of offensive linemen and powered into the end zone from 10 yards out two plays later to tie the game up at 7-7.

Tom Savage didn’t have to be perfect to lead a winning effort for the Texans Monday night. All he really had to do was be average.

Yeah, he didn’t come close to that.

Completing 22-of-37 passes, he went for 252 yards. Of course, 125 of those yards went to Hopkins, who had an outstanding game on a personal level.

Quite aside from the completion rate, the passes Savage missed were often extremely off the mark. He also turned the ball over three times, which led to 10 points for the Ravens.

In a game Baltimore won by seven points, that proved to be a huge difference.

After Baltimore’s offense benefited from the fake punt to punch in its first score of the game, the defense stepped up huge. On Houston’s next drive, Savage threw the ball into coverage, and safety Tony Jefferson came up with his first interception of the season.

While that was his first, it was the 17th interception of the season for the Ravens as a team, which leads the entire league. Better still, it set up the offense for another touchdown, which was run in by running back Alex Collins five plays later.

Which leads us to this incredible stat.

Ravens have converted 81 points off turnovers after a Tony Jefferson interception set up that touchdown. That means 35 percent of Baltimore's scoring this season has come off turnovers. https://t.co/ZuPGrj3g04

Later on in the game, Savage turned the ball over a second time when he failed to hold onto it with Terrell Suggs coming off the edge for his second sack of the game. Houston was in Baltimore territory in the fourth quarter, down by four points with under five minutes left to play.

For all intents and purposes, this sewed up the win for the home team. Kicker Justin Tucker booted in his third kick of the game a couple minutes later to put the Ravens up by six.

Anthony Levine Sr. capped off the effort with the game-sealing pick on Houston’s next offensive drive.

Houston was up 7-0 when there was a muffed punt by Chris Thompson that got the fans in Baltimore into the game for the first time. Four plays later after a three-and-out, Shane Lechler punted just 34 yards to set Baltimore up in great field position.

This ended up being the drive in which Koch pulled off the fake punt that propelled the Ravens to finally get on the board. This proved to be the key moment in the game that turned the tide and ultimately led to the Texans losing a very winnable game.