Winners, losers from Bears’ statement victory over Cowboys on ‘TNF’ 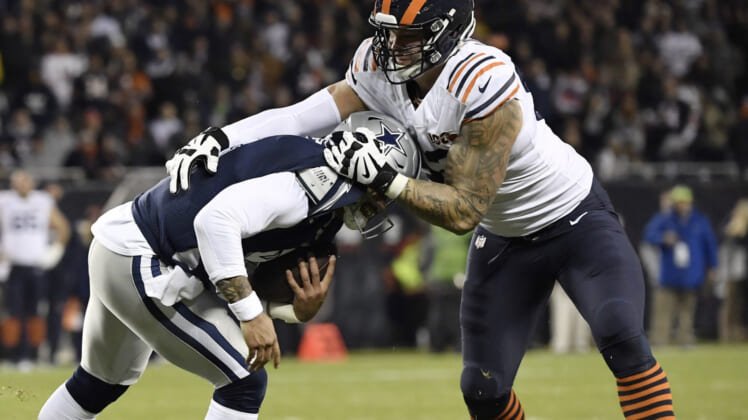 The Chicago Bears hosted the Dallas Cowboys on “Thursday Night Football” to start Week 14. Both teams entered the game at 6-6, but this seemed to be more of a must win for the Bears. They have no shot in the NFC North while Dallas is in first place in the NFC East.

It sure looked like Chicago wanted this game more. After the Cowboys opened it up with a long 17-play touchdown drive, the Bears went into domination mode in front of their home crowd at Soldier Field.

When all was said and done, Dallas laid flat as Chicago won by the score of 31-24 in a game that was not as close as the final score indicated. Mitchell Trubisky continued his stellar play. Jason Garrett was without answers.

These are among the biggest winners and losers from Chicago’s seven-point victory over a free-falling Cowboys team on “Thursday Night Football.”

We gave Trubisky a lot of flack early Thursday night after he threw a horrible interception near the end zone. But much like what he did on Thanksgiving, Trubisky responded big time as the game progressed.

He finished the first half completing 12-of-17 passes for 126 yards with two touchdowns. All four of Chicago’s possessions before halftime ultimately entered Dallas’ end of the field.

It got much better for the North Carolina product from there. Trubisky added a beautiful touchdown run in the second half and finished the game with four scores. This kid is playing great football, and it has the Bears thinking of a late-season playoff push.

Cooper is dealing with injuries. That’s been the case all season. Despite this, he’s shown an ability to play through said injuries and perform extremely well. That has not been the case recently. Just two weeks ago, the Pro Bowler was held without a catch in a narrow loss to the New England Patriots.

Cooper’s performance Thursday evening was similar to his outing against the Pats, at least early on. The impending free agent caught 6-of-8 targets for 83 yards and a touchdown. That’s the good news. The bad news? Most of that production came in garbage time, including the touchdown.

Cooper needs to put together complete games for his Cowboys to be successful over the final three weeks of the season. It’s that simple.

The Cowboys’ offense still should run through Elliott. That was the mantra for Jason Garrett and Co. during an awesome game-opening touchdown drive. Elliott ran the ball eight times in a 75-yard drive that culminated in a one-yard scamper for the back.

While the rest of his Cowboys team struggled to do anything on either side of the ball, Elliott was at the top of his game.

He finished with 93 total yards on 21 touches before the Cowboys had to go pass heavy in what ended up being a three score game in the final quarter. If there’s anything Dallas can point to here, it’s that Elliott might be ready to make a major impact over the final three games of the season.

This has been the case all season. For some reason, Cohen has not been a part of Matt Nagy’s offense. It really is something to behold. The explosive former All-Pro entered Week 14 having put up just 456 yards on 101 attempts. It did not get any better against Dallas.

As the rest of his Bears offense was buzzing, Cohen was nowhere to be found. He finished the evening having put up 31 total yards on nine touches. David Montgomery continues to get a bulk of the touches. Meanwhile, Trubisky is focusing more on Allen Robinson. All of this has led to a major regression from the 24-year-old Cohen.

Where to start here? Tolliver only saw action Thursday evening because starting Bears corner Prince Amukamara was inactive to injury. His first consistent playing time of the season (three defensive snaps up to this point) included an assignment against the above-mentioned Cooper.

Shadowing Cooper throughout the evening, this former LSU standout yielded just two catches in the first half. It wasn’t until garbage time that Cooper started to get going against Toliver.

We knew he had talent in college. Off-field issues derailed a once-promising career. The hope now is that Toliver has matured off the field and is ready to make an impact. He looks darn good on the field.

Horrible. Downright disastrous. We can spin it any way and still draw the conclusion that Prescott was not ready for prime time Thursday night.

The contract-year quarterback completed 27-of-49 passes for 334 yards with one touchdown. He was inaccurate throughout the evening, failed to lead Dallas to success on third down and just wasn’t himself.

After dominating earlier this season, Prescott has now put up three touchdowns and two interceptions over the past three games. Ouch!

This veteran receiver is finding a nice little flow with Trubisky in recent weeks. After scoring three touchdowns in his first 10 games of the season, Robinson has now tallied four scores over the past three games.

That included game-changing first-half touchdowns against the Cowboys Thursday night.

While Robinson finished the night with just five catches for 48 yards, he came up with big reception after big reception. That’s going to be huge for Trubisky moving forward.

The Cowboys’ brass has continually noted that it won’t fire Garrett in the middle of the season. This public stance is now going to be put to the test following Dallas’ horrendous showing Thursday night.

After driving down the field 75 yards in nearly nine minutes for a game-opening touchdown, the Cowboys’ offense was completely inept until garbage time late in the game.

At some point, it’s going to be apparent to owner Jerry Jones that Garrett isn’t the answer for the final three weeks of the season. He’s going to hang his hat on the Cowboys’ first-place status. But let’s get real. This team is 6-7 and going nowhere fast under Garrett.