Super Bowl 50 wasn’t pretty, but it was entertaining for those of us who love a good, old-fashioned defensive slug fest.

The Denver Broncos prevailed over the Carolina Panthers by a score of 24-10, thanks to an outstanding defensive effort by Von Miller and Co.

There were plenty of ups and downs throughout the contest. And while it’s hard to find anything positive to talk about when it comes to Carolina in defeat, there was something rather special going on amidst the carnage, which we’ll soon address.

Von Miller was like a Tazmanian Devil, and he earned the game’s MVP trophy for his fine play. On the flip side, Cam Newton had the worst game of his season, by a long shot.

With that in mind, the following are the biggest winners and losers from Super Bowl 50.

It wasn’t a vintage performance by Manning that won Super Bowl 50, but the sheriff did just enough to help his team come away with the victory.

Here are the final stats for Manning: 141 yards on 13-of-23 passing with no touchdowns and one interception.

In the end, nobody will dwell on his below-average performance. What will rightfully be remembered is that one of the game’s all-time great quarterbacks won his second NFL championship ring, which is huge.

Manning’s legacy didn’t need any extra padding for him to be considered as an all-time great — he’d already accomplished that goal before the 2015 NFL season began. But winning this one puts him in rare company as one of just 12 NFL quarterbacks to ever win multiple Super Bowls.

A funny moment happened after the game. Everyone in America, and many across the world, are wondering if this truly is the last time we’ll see Manning on the football field. Instead of answering questions about his future on the football field, Manning let everyone know he plans on drinking a lot of Budweiser in the near future.

On a different note, Manning’s father, Archie Manning, believes his son’s time in Denver is done. That’s not the same as saying Manning will retire, but it’s more than what we’ve heard from anyone on the topic thus far.

Whether he’s done or comes back for another season, we salute one of the game’s greatest players.

Loser: Cam Newton comes up small in the biggest game of his life 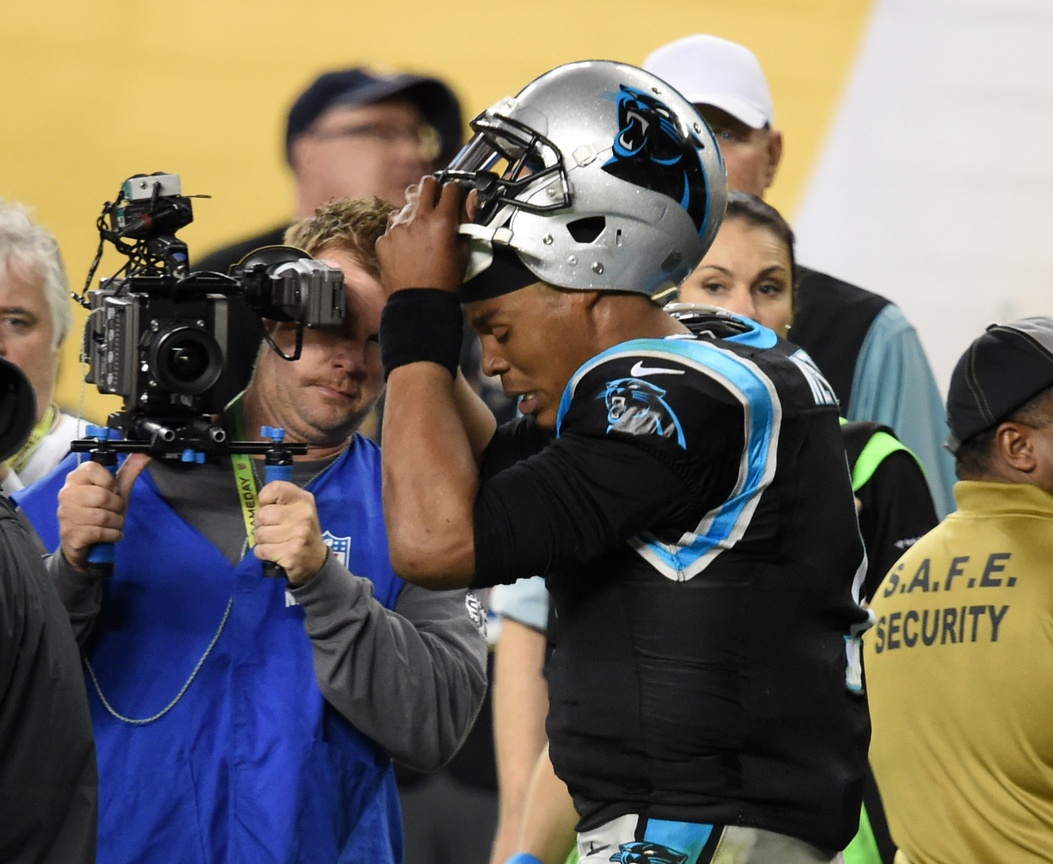 After putting together a tremendous season, winning the league MVP award and dabbing his way into the biggest spotlight of them all, Newton withered under the pressure.

Let’s start with the stats, which are horrific no matter how you slice it. Newton finished Super Bowl 50 having completed just 18-of-41 passes (43.9 percent). He did manage to gain 265 yards on those completions, but he failed to throw a touchdown pass, tossed an interception and lost two fumbles.

It was one of the worst quarterback performances in Super Bowl history, and he punctuated it with one of the worst “effort” plays you’ll ever see from a superstar playing in the biggest game of his life with all the chips on the table.

Late in the fourth quarter, down by six points, Newton was stripped by Von Miller (more on him later). He had a shot — a slim one, granted, but a shot nonetheless — to come up with the football as it bounced on the ground.

However, rather than give up his body to fight for the ball, Newton allowed two Broncos defenders to fight over it instead. Not surprisingly, Denver came up with the loose ball and turned it into eight points (touchdown and converted two-point conversion) three plays later.

Making matters worse, he walked off the stage during his media session after the game.

Cam Newton didn't think much of a question being asked and walked off pic.twitter.com/lY8uPU7eBV

Newton is still young (26) and might have more opportunities to win a Super Bowl, but if he never does get back to this peak again he’ll likely look back at Super Bowl 50 with regret.

Before the game began, the Super Bowl was kicked off by a tremendous introduction of all the previous 49 Super Bowl MVPs.

Though obviously not everyone was able to be there in person, many of them did make it. Not surprisingly, there were some who garnered equal measures of adoration and scorn.

This procession was followed by two more, as the two Super Bowl 50 contenders were introduced.

The Panthers invited Stephen Curry to be a guest drummer, and he got the crowd roaring by banging on a huge drum as the Panthers took the field.

The very pro-Denver crowd at Levi’s Stadium roared to life when Peyton Manning and the Broncos took the field, and then Lady Gaga knocked the national anthem out of the park to close out the pre-game celebrations:

The entire production went off without a hitch, which is a credit to the hundreds of people who work behind the scenes.

As good as the pre-game show was, Super Bowl 50’s halftime show was half baked. Coldplay, Bruno Mars and Beyoncé all came out as flat as a two-liter bottle of Mountain Dew that’s been sitting in your fridge for the past year.

Production values were high, as you can see here when Beyoncé came out to join Coldplay.

But the energy and passion that were the hallmark of Bruno Mars’ performance last year were missing.

The best part of the show was the tribute to the best performances of Super Bowls gone by. However, this show didn’t resonate in that same way.

Don’t get me wrong. It was a great technical show, and fans of the groups performing likely thought it rocked. But it was missing that special something that makes good things great.

Whether or not you agree with me on that count, one thing we can all agree on is that love was in the air at Levi’s Stadium.

Miller is an unstoppable force on the edge.

His quick first step is unrivaled in the NFL right now, and his performance in the playoffs and Super Bowl 50 highlighted his worth.

Miller came up with one of the game’s biggest plays when he sack/stripped Cam Newton midway through the first quarter, setting up a touchdown on the fumble recovery by Malik Jackson (watch here).

He burst past Panthers right tackle Mike Remmers like he wasn’t even there and came around the corner with a full head of steam. He was smart enough to go for the ball, though, rather than attempting to destroy Newton, who was WIDE open for abuse. In other words, he’s no Rodney Harrison.

That was only the first of two sack/fumbles for Miller, who did it again to put the Panthers away in the fourth quarter.

Miller finished the game with 2.5 sacks, two forced fumbles that turned into two touchdowns for Denver and six tackles (five solo). He finished the postseason with five sacks, all accumulated in the final two games against the New England Patriots and Panthers.

The Broncos will reportedly use the franchise tag on Miller to keep him in Denver, but the $14.1 million estimated price tag wouldn’t exactly come close to making him the league’s highest-paid defender. This is reportedly the target for the outside linebacker, who made his case to earn it after a phenomenal season and postseason performance.

Midway through the first quarter, Panthers receiver Jerricho Cotchery made an outstanding juggling catch, which was initially ruled an incomplete pass.

Carolina head coach Ron Rivera made a smart decision to challenge the play, and upon the review it was clear Cotchery did control the ball all the way through until the end.

Even in the NFL this is a catch pic.twitter.com/q2oRDN2tGw

Unfortunately, CBS’ Mike Carey — the world’s most reliable barometer for getting calls wrong — said that the call should be overturned. Panthers fans everywhere groaned with one accord, and as sure as the sun rises in the east, the call was confirmed.

NFL’s V.P. of Officiating, Dean Blandino, said a few months ago that the catch rule always has some “subjectivity” to it, which is really just a fancy way of saying nobody knows what a catch is. This was clearly demonstrated Sunday.

Around and around we go. Where this thing stops, nobody knows.

Ealy put forth an MVP-type performance in a losing effort for the Panthers. He kept Carolina in the game, to be honest, when nothing else was going their way.

Finishing with three sacks, two tackles behind the line of scrimmage, two additional quarterback hits on Manning and a fantastic one-handed interception in the second quarter (watch here), Ealy matched Miller’s performance, and then some.

Unfortunately, the rest of Ealy’s teammates were not able to match his high level of play Sunday, and his fine performance was wasted.

Still, there is a positive to glean. Jared Allen might be gone next year, and the Panthers will need to replace his production. Ealy, a second-year player out of Missouri, appears to be the long-term answer as the dominant pass-rusher on a defense full of stars.

Most of the early action went in favor of the Broncos, but Talib was off in a huge way.

In the first quarter, he committed a terrible unsportsmanlike conduct penalty going after Corey Brown on a failed Broncos’ third-and-eight attempt.

The dumb penalty kept the drive alive for the Panthers, but ultimately it didn’t hurt because Carolina failed to score.

On the next offensive possession for Carolina, Talib committed another bad penalty (again, on Brown) when he ripped the receiver’s head around on a brutal facemask (watch here).

The penalty didn’t hurt the Broncos (again) too much, as it was simply half the distance to the goal line. However, it did set up the Panthers close enough to the end zone that running back Jonathan Stewart was able to sky over Denver’s defensive line for a Superman touchdown on the next play.

The touchdown got Carolina on the scoreboard for the first time after Denver had previously dominated the action to open up the game.

Phillips won the Assistant Coach of the Year award Saturday night for his No. 1-ranked defense, and he proved his worth once again on Sunday. Forty years since starting out as a defensive line coach for his father Bum Phillips with the Houston Oilers, Wade Phillips has finally won a Super Bowl.

The Panthers entered Super Bowl 50 on a serious roll. The offense, led by Newton, was an unstoppable juggernaut that had chewed up and spit out the formidable defenses of the Seattle Seahawks and Arizona Cardinals.

But Wade Phillips and his tremendous defense shut down the red-hot Panthers and kept Newton from dabbing — something nobody’s been able to do this year.

Newton finished with 265 yards passing, but he completed just 43.9 percent of his passes and turned the ball over three times (one interception and two lost fumbles).

After the game, Phillips called the 2015 Broncos defense a “special, all-time” unit (h/t Pro Football Talk). He’s not wrong, and while the players did execute, everything started with the coach this year.

Loser: Panthers and the turnover battle

Turnovers almost always determine the outcome of big games. On Sunday, the Panthers lost the battle in a big way, thanks in large part to an uncharacteristic display of butterfingers.

Mike Tolbert fumbled twice (one he recovered) and Cam Newton coughed up the ball near his own goal line in the first quarter, leading to the game’s first touchdown — for Denver. He also turned the ball over again late in the fourth quarter on Miller’s second sack/strip of the game.

In total, Carolina turned the ball over four times, or two more times than the Broncos did. Making matters worse, those two extra turned into 15 points for Denver, which makes up the difference in the final score.

The Panthers have been the winners in this department all season long and were plus-eight in their first two playoff games against Arizona and Seattle. But when the big game arrived, the tables turned in a big way.