Winners and losers from Pro Football Hall of Fame Game

The first football game of the 2018 season took place Thursday night, as the Chicago Bears battled the Baltimore Ravens in the Pro Football Hall of Fame Game.

The contest itself was about as ugly as you’d expect, given both teams have just started getting into the swing of training camp practices recently. However, there were some highs mixed in with the lows in this one, which the Ravens eked out, 17-16.

With that in mind, here are the winners and losers from Thursday night’s Pro Football Hall of Fame Game.

Winner: Kamalei Correa was all over the place

Heading into his third season as a pro, former second-round pick out of Boise State Kamalei Correa is doing everything he can to earn more playing time for Baltimore. A special teamer his first two years, he really needed to show he can do more.

What he did Thursday night certainly won’t hurt his cause.

During the first half, Correa made three solo tackles, one sacks, one interception and two passes defensed. Then in the second half he added another sack/strip, along with three more tackles.

That’s the way to get your coaches to notice you, and it’s going to be interesting to see how he plays the rest of the summer. 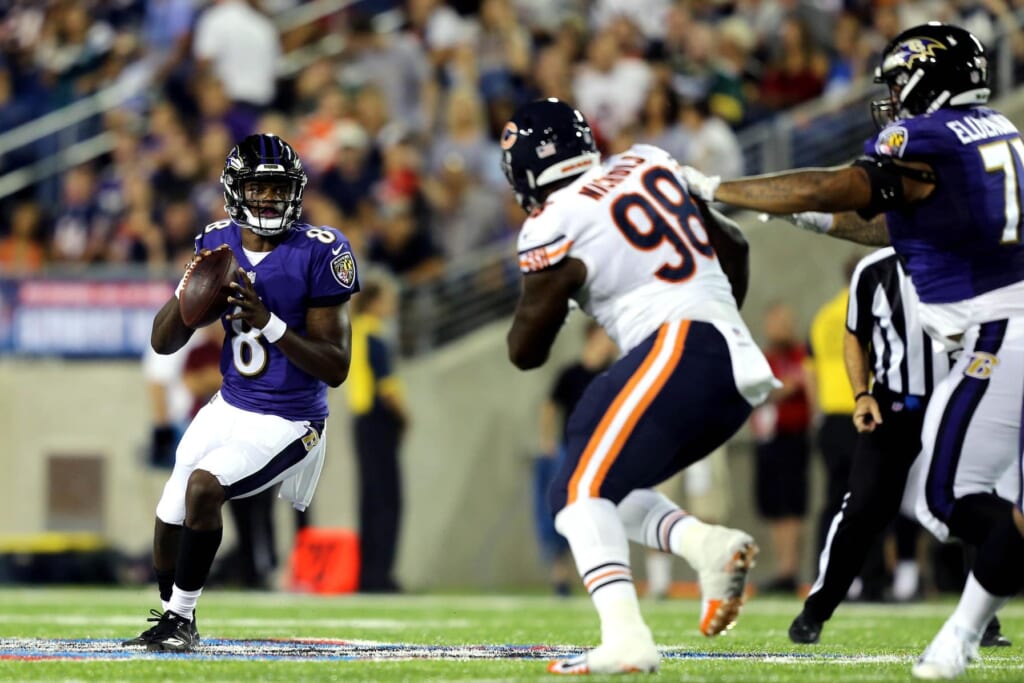 It’s safe to say that Jackson’s NFL debut was underwhelming.

The former Heisman winner did show off some of the signature game-breaking moves he became famous for at Louisville, and he did throw his first NFL touchdown (watch here). But overall this was not the kind of start most were expecting out of the first-round pick.

Jackson was very rattled by the blitz, and his accuracy was spotty. He finished the game with 33 yards on 4-of-10 passing with one touchdown and a bad interception that was thrown late and inside near the left sideline.

It’s safe to say that Joe Flacco’s job is safe, at least for now.

Winner: Bears defense had some teeth

One of the reasons Jackson struggled so much Thursday night is that Vic Fangio’s defense was on its game. Every player showed discipline, especially with Jackson in the game, and there were no real holes to exploit when he took off on the ground.

In the end, Chicago had eight total sacks and two interceptions. There’s a lot of young talent on this roster, and Fangio is a master at getting his guys into position to make plays. 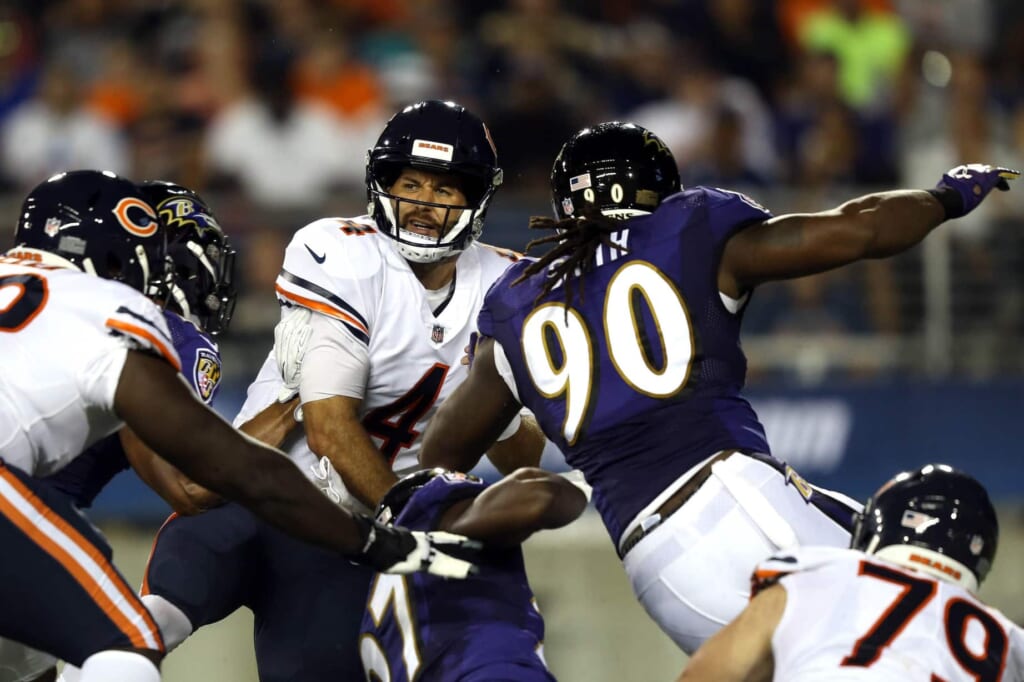 With Mitchell Trubisky staying on the sideline during this game, Chase Daniel started under center for Chicago. It did not go swimmingly for the career backup.

Daniel threw two interceptions before the end of the first quarter. And honestly, both were his fault. The first was pretty funny, as Daniel threw the ball right off the helmet of his offensive lineman (watch here).

The second pick wasn’t nearly as amusing. Daniel displayed horrible ball placement on a pass intended for wide receiver Bennie Fowler, and it was nothing more than low-hanging fruit for linebacker Kamalei Correa to pluck for the turnover.

Daniel finished with 53 yards on 8-of-16 passing with one touchdown and the two interceptions.

Winner: RG3 had some positive moments

After missing the entire 2017 season, Griffin’s 2018 debut wasn’t exactly a shining beacon of brilliance, but he had his moments. The final stat line shows that Griffin completed 7-of-11 passes for 58 yards with one touchdown and one interception.

The interception was absolutely not RG3’s fault (more on that momentarily), and the touchdown-scoring drive was actually pretty sweet. Griffin got into a groove, completing his final four passes of the drive for 49 yards, capping it off with a smooth roll-out touchdown pass to tight end Maxx Williams (watch here).

Griffin will likely need to do more in the next few weeks to have a shot at sticking in Baltimore (if that chance exists at all). But Thursday night was a step in the right direction, to be sure.

Heading into training camp, Perriman, Baltimore’s first-round pick in 2015, needed to really show up well to avoid being cut.

During Baltimore’s first offensive drive, with Robert Griffin III running the offense, he delivered a strike right at Perriman’s helmet. Rather than hauling in the pass, however, Perriman let the ball go right through his hands. It bounced off his helmet and was intercepted by DeAndre Houston-Carson.

It was exactly the wrong way to start his preseason.

Bad drop by Breshad Perriman. Most people I've talked to expect him to get cut.

Perriman really is going to have to work his tail off to avoid being labeled a bust for the rest of his career.

Chicago rookie receiver Javon Wims had the biggest night of any skill position player for both teams.

The seventh-round pick out of Georgia really came alive in the second half but also showed up well in the first half. He finished with seven catches for 89 yards, including the 10-yard catch on fourth-and-6 late in the fourth quarter that set up Chicago’s second touchdown of the night.

The Bears have some stiff competition for their final roster spots at the receiver position. Wims certainly made the coaches notice he’s a player worth considering for one of those spots.