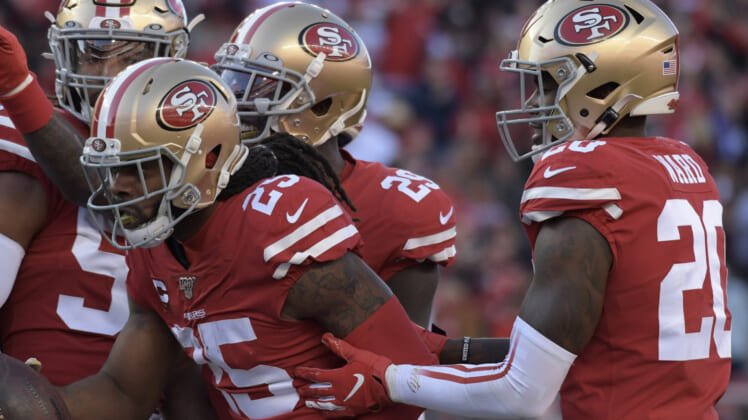 The San Francisco 49ers took on the Minnesota Vikings in the first of four NFL Divisional Playoff games at Levi’s Stadium on Saturday.

What a performance it was from Kyle Shanahan’s squad en route to an absolutely dominating 27-10 win over Minnesota.

San Francisco outgained the Vikings by a total of 308-147 in the game. The team’s defense stepped up big time, holding Dalvin Cook in check and outclassing Kirk Cousins.

In the end, San Francisco earned a hard-fought trip to the NFC Championship Game. Here, we look at the winners and losers from the team’s 17-point win over Minnesota.

One of the top special teams players in the NFL, Mostert ended the regular season leading San Francisco in rushing. Mostert had 58 yards on 12 attempts on Saturday. But that’s not where he made a major impact.

With San Francisco up 24-10 late in the third quarter, Marcus Sherels muffed a punt inside the Vikings’ 15. Mostert was down the field to recover it, setting the 49ers up with a field goal and a three-score lead. That’s the type of impact Mostert has made in his young NFL career, and it has San Francisco one win from the Super Bowl.

You like that? Not so much. One week after outplaying Drew Brees, Cousins once again came up small in the biggest stage of his career. The Pro Bowler completed 21-of-29 passes for 126 net passing yards in the 27-10 loss.

Cousins didn’t really take any shots down the field after connecting with Stefon Diggs on an early touchdown. In fact, the veteran put up 85 net passing yards the rest of the way. That’s just not going to cut it. And it will lead to renewed questions heading into the Vikings’ offseason following Saturday’s loss.

The NFL’s single-best cornerback during the regular season, Sherman was dominant against the Vikings on Saturday. That included this interception of Kirk Cousins to set up a two-score lead in the third quarter.

It’s just amazing how good Sherman has been two years removed from suffering an Achilles injury. An argument can be made that he’s currently playing his best football. Holding the Vikings to 126 net passing yards on Saturday was yet another example of this.

After being one of the top-five quarterbacks over the past half of the regular season, Garoppolo struggled big time against a good Vikings defense on Saturday. He opened up the game completing 5-of-6 passes on the 49ers’ initial touchdown drive.

From there, Garoppolo was wobbly as all get out. He completed six of his final 13 passes including this brutal interception late in the second quarter. Garoppolo will need to play better if the 49ers want to win the Super Bowl. It’s that simple.

Having struggled with drops during the regular season, there wasn’t much expectation that Bourne would come up big against the Vikings in the NFC Divisional Playoffs. That’s why they play the game.

What an absolutely huge third-down catch from Bourne there. It came after he opened the scoring with a touchdown. The stat line of three catches for 40 yards doesn’t do his performance justice. Bourne came to play for San Francisco Saturday afternoon.

Cook was a huge factor for the Vikings in their wild card win over the Saints. The hope heading into Saturday’s game was that one of the game’s best backs would be able to duplicate that performance. In no way did this come to fruition.

Cook tallied 18 yards on nine attempts and added just eight receiving yards in the game. That’s not the type of balance Minnesota was seeking heading into a game against one of the NFL’s best defenses. And it cost Minnesota big time in a blowout 27-10 loss.

It’s simple. Once Ahkello Witherspoon was burned by Stefon Diggs for the Vikings’ only touchdown of the game, Kyle Shanahan and Co. decided to go with Moseley. He should have started from the get. But the early Witherspoon hook helped San Francisco’s defense step up big time.

That’s just crazy stuff right there. Lined up against Diggs for the remainder of the game. Moseley allowed one catch on four targets. If the 49ers can get this type of shut down performance opposite Sherman, they are going to be hard to beat moving forward in the postseason.

We couldn’t complete this article without mentioning just how small Diggs was on Sunday after that opening touchdown. He let a reserve 49ers cornerback dominate him throughout the game. It really was stunning to see Diggs fail to step up when the Vikings needed him.

Sure Cousins didn’t help matters here. Diggs will likely let his quarterback know that after a drama-filled season between the two. Even then, Diggs did not do the Vikes any favors in a 27-10 loss.