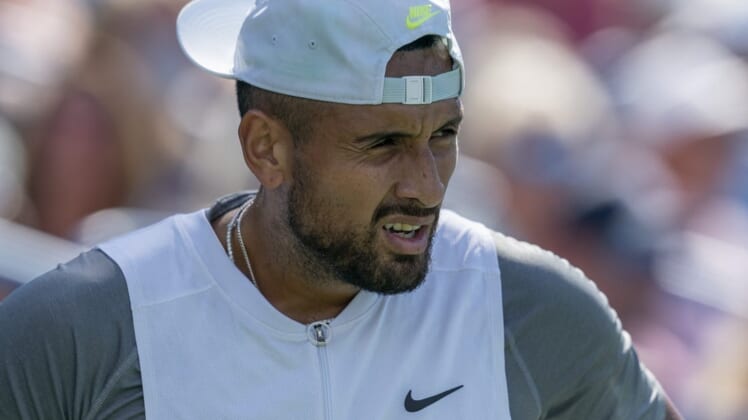 The woman who Nick Kyrgios wanted removed from the Wimbledon final for “being drunk out of her mind” says she is planning to sue the Aussie for defamation.

Kyrgios beseeched the chair umpire to have Polish medical attorney Ania Palus removed for distracting him in the third set of his loss to Novak Djokovic in the Wimbledon finals in July.

“Why is she still here?” Kyrgios said to the umpire. “She’s drunk out of her mind and speaking to me in the middle of a game. What’s acceptable? OK, kick her out. I know exactly which one it is. The one in the dress, who looks like she’s had about 700 drinks, bro.”

Kyrgios’ assertion led to Palus being escorted from the stadium, though she was allowed back in after 15 minutes. Palus attended the finale with her mother.

“During the course of the final, Nick Kyrgios made a reckless and entirely baseless allegation against me,” Palus said in a statement to multiple media outlets.

“Not only did this cause considerable harm on the day, resulting in my temporary removal from the arena, but Mr. Kyrgios’ false allegation was broadcast to, and read by, millions around the world, causing me and my family very substantial damage and distress,” the statement went on. “I am not litigious, but after much consideration, I have concluded that that I have no alternative but to … bring defamation proceedings against Mr. Kyrgios in order to clear my name.”

At the time, Palus told The Telegraph she was rooting for Kyrgios.

“I understand what it is like to be an underdog so I wanted to give him support,” Palus said, per The Telegraph. “Maybe I took it too far so for that I am sorry but I only had good intentions.”

Earlier in the tournament, Kyrgios was fined $10,000 for spitting in the direction of a spectator during his first-round victory, claiming verbal abuse. Kyrgios also asked for that fan’s removal.

Kyrgios has reportedly accumulated a total of about $540,000 in fines in his career, more than any other active player.