Two wins from a third NBA championship as an assistant coach, Willie Green may also be on the verge of a promotion.

The Phoenix Suns assistant is considered the frontrunner to land the vacant head-coaching job for the New Orleans Pelicans, according to multiple reports Monday.

Green is helping with the Suns’ efforts against the Milwaukee Bucks in the NBA Finals, with Phoenix ahead two games to one in the best-of-seven series. Both ESPN and The Athletic reported Monday that he has emerged as the top contender for the position.

The Pelicans’ job, which opened up after Stan Van Gundy stepped down nearly one month ago, is one of two remaining head-coaching spots (Washington Wizards) after six other teams have announced new coaches for next season. 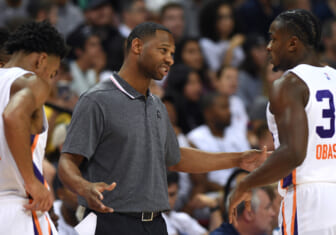 Green followed a 12-year playing career by becoming an assistant coach with the Golden State Warriors, where he spent three seasons on the bench behind Steve Kerr and won two league titles. Green joined the Suns’ staff, headed by Monty Williams, in June 2019.

The former shooting guard was selected in the second round of the 2003 NBA Draft by the Seattle SuperSonics before being dealt to the Philadelphia 76ers in a draft-night trade. Green spent seven seasons with the Sixers, averaging a career-high 12.4 points per game in 2007-08.