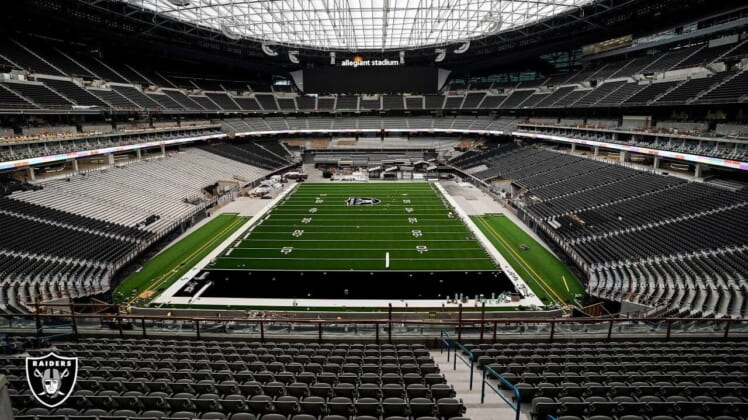 A report yesterday indicated the NFL is strongly considering allowing fans to attend games amid the COVID-19 pandemic but with one catch: the fan must sign a waiver immunizing the teams and league of legal responsibility should you contract the virus as the game.

The Las Vegas Raiders open their first-ever season in the new Allegiant Stadium the third week in November against Drew Brees and the New Orleans Saints. What hasn’t been determined if there will be Las Vegas Raiders fans in the stands of the new $1.9 billion stadium just off the Las Vegas Strip.

According to a report first filed by The Athletic’s Dan Kaplan on Wednesday, the NFL is working hard to ensure fans are present at games but mitigating the legal liability the league, it’s owners, and teams would face. Kaplan’s initial reporting states the league is considering requiring liability waivers for fans present at this season’s NFL games – including Las Vegas Raiders fans.

“It is probably something you do electronically, just trying to figure out the operational challenges associated with waivers,” said one of Kaplan’s sources. “Just have to work out how best to do that.”

The NFL has been consistent in saying they expected their season to run as normally as possible despite the unknowns surrounding the COVID-19 pandemic. With areas of the country fairing differently, it’s unknown which states (like New York) could be unable to allow fans in stadiums due to state executive or emergency orders.

In addition to the liability waiver, Kaplan’s story also states sources have indicated more recommendations on how to mitigate risk associated with the virus are also being considered. That includes all transactions inside stadiums be cashless, the selling of only prepackaged concessions, and possibly requiring fans to wear masks.

But what about those waivers? Are they legally enough to protect the league and the Raiders should a spectator get sick?

“The enforceability of these NFL COVID releases will depend on the state,” said attorney Sam Mirejovsky of the Sam & Ash law firm in Las Vegas. “In most jurisdictions, you can waive your rights in claims involving ordinary negligence. The NFL, teams, stadium operators, etc. still cannot be grossly negligent. They will have to take all reasonable steps to keep fans safe.”

Therein lies the issue for NFL teams – including the Las Vegas Raiders. IF they do institute a series of protocols that does all it can to make the games as safe as possible, then it should be fine.

What about fans that don’t want to sign a release?

“Unfortunately, if you want to go to a game you’ll probably need to sign a release,” Mirejovsky says. “And since courts have repeatedly upheld releases for ordinary negligence, you don’t have any legal standing to refuse to sign AND be allowed to enter the stadium. But if the NFL puts any language that goes beyond what is legally acceptable, the release could be voided.”

In addition to the releases, the NFL has already made a big decision to try and protect the players on the field.

The NFL, with strenuous objection by Raiders owner Mark Davis, has already decided to tarp off the first eight rows of seats closest to the sidelines to create physical distancing between fans and players. Each NFL team can then sell advertising on those tarps.

Davis was the lone dissenting vote on the proposal insisting his Las Vegas Raiders fans deserved access to their seats.

“I can’t imagine telling one fan they cannot attend the opening game of our inaugural season in Las Vegas at the most magnificent stadium that they helped to build, let alone tell 3,500 fans that their seats are gone for the entire season,” Davis told Vinny Bonsignore of the Las Vegas Review-Journal after the owners call and vote. “Those seats in the front rows are some of our most ardent fans, including members of the famed Black Hole. You think I want to sell advertising on their seats?”

No matter what the NFL decides, or allows their teams to decide, the fate of Las Vegas Raiders fans attending games at Allegiant Stadium is most likely in the hands of Nevada Governor Steve Sisolak. The league’s 32 teams will be required to abide by local and state guidelines.

Would you sign a waiver to attend a Raiders game at Allegiant Stadium this fall?