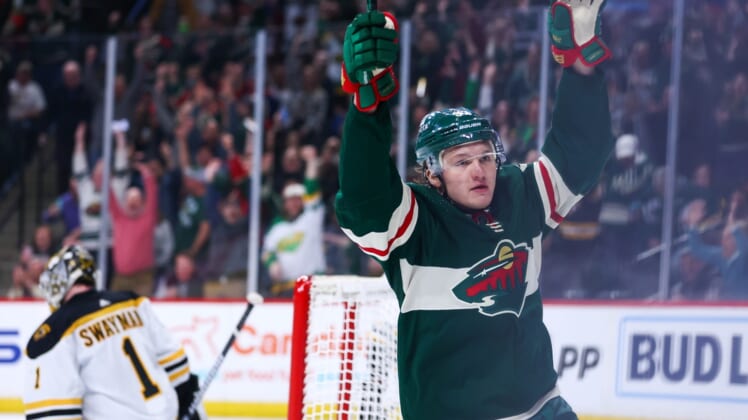 The Minnesota Wild will vie for a regular-season sweep of the Chicago Blackhawks on Saturday afternoon when the teams meet in St. Paul, Minn.

The Wild have won the previous three encounters this season against the Blackhawks, with two victories coming in a home-and-home series in January and the most recent taking place on Feb. 2. Minnesota has outscored Chicago by a combined margin of 14-4.

The Blackhawks are looking for their first win over Minnesota since posting a 5-3 decision on Dec. 15, 2019.

Meanwhile, Minnesota is looking to string together back-to-back victories after holding on for a 4-2 win over the Boston Bruins on Wednesday night. This is the third contest of a nine-game homestand for the Wild, who are looking to break out of a recent slump.

“Every game from here on out is going to be playoff-type atmosphere, and that’s what it takes to win in the playoffs,” Wild goaltender Cam Talbot said after the win over Boston. “It’s going to take those grind-it-out, hard-nosed games and we’re built for that.”

Kirill Kaprizov will try to stay hot after scoring his 31st and 32nd goals of the season in Minnesota’s most recent game. The 24-year-old Kaprizov leads the Wild in goals, assists (43) and points (75) in 58 games.

Blackhawks interim coach Derek King said he was not yet sure if Vlasic would make his debut on the road against the Wild.

“I don’t want to throw the kid into a situation where (it’s against) a big team like that,” King said. “We’ll see. I mean, he is a big kid. Not that there’s any easy team out there, but if I can choose somebody different, I’d like to.

“We’ll see. I might say, what the heck? Just throw him in the fire, see what he’s got.”

Whenever Vlasic makes his debut, King said, he will bring important skills to the blue line.

“He closes well,” King said. “He’s got a good reach. His first pass is hard. He snaps that puck around pretty good.”