Even in a brutal NL West division, the San Francisco Giants hold an early lead, and there's evidence to suggest they can sustain their hot start. 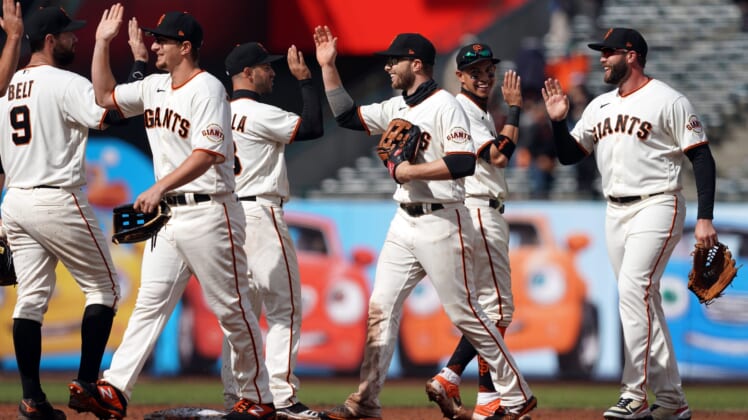 The San Francisco Giants have been one of MLB’s surprise teams this season. They own the best record in the National League and are therefore atop the NL West at 16-10. Yes, that means they’ve won games at a higher clip than the rival Los Angeles Dodgers and San Diego Padres, who are both World Series contenders.

Can the Giants keep up the heroics and contend for the World Series? Probably not. At the same time, their roster is playing well and certainly has the chance to at least be in the running for an NL Wild Card berth.

Here are three reasons why the San Francisco Giants’ hot start can be sustained.

The catalyst for the 2021 San Francisco Giants’ early-season surge has been their starting rotation.

Kevin Gausman has built off his 2020 campaign and then some, as he sports a 2.14 ERA while holding opponents to a .160 batting average across five starts this season. Reclamation projects Anthony DeSclafani and Aaron Sanchez have been pleasant surprises.

Meanwhile, third-year pitcher Logan Webb has held his own and Johnny Cueto has been his vintage self, deceiving hitters with his devious release and pitching deep into games. Veteran southpaw Alex Wood has also impressed, posting a 1.50 ERA across three starts.

The aforementioned pitchers have been the best version of themselves to date. In all likelihood, they won’t have the same stat lines in August. That said, their growing confidence is keeping the Giants in games, which goes a long way for an offense that’s been inconsistent.

Starting pitching can keep any team in the playoff hunt. Pillars standing their ground and young arms with a chip on their shoulder continuing to perform well gives the Giants some headway.

Last season the Giants offense was propped up by some of their more inexperienced hitters providing a jolt like Mike Yastrzemski, Donovan Solano, Alex Dickerson and Austin Slater. The 2021 season hasn’t been nice to three of these sluggers, as Yastrzemski, Dickerson and Slater are hitting no better than .224.

Yastrzemski has been the best thing the Giants have going for them around the diamond since 2019. He has an impactful swing that slugs at a considerable level, and he can play all three outfield positions.

Solano hit .326 last season, providing the Giants with one of the best pure hitters in the sport. Dickerson posted 10 home runs and a .947 OPS, and Slater logged a .914 OPS.

These individuals are capable of much more than their porous starts. They bring a combination of contact and power to the table. It’s feasible to expect them to right the ship in the coming weeks, beefing up the Giants offense and further complementing a rotation that’s firing on all cylinders and a bullpen that shuts the door in the late innings.

The Giants have the likes of Tyler Rogers, Jake McGee, Caleb Baragar and Jose Alvarez coming out of the pen, but their young bats were the main reason to be optimistic about the Giants building on their 29-31 campaign. They’ll soon get back to that play.

Indeed, San Francisco’s youngsters are struggling. On the other hand, the club’s veterans are flat-out raking.

Buster Posey is hitting .361. Evan Longoria sports a .949 OPS. Donovan Solano is hitting .300. Like some of the youngsters, this trio of veterans bring a combination of contact hitting and power to the table, as well as sound defense.

Posey looks like his old self, that being the best all-around catcher in baseball. Longoria is a vacuum at the hot corner with pop in his bat. Solano holds down second base and is a contact hitter. First baseman Brandon Belt and shortstop Brandon Crawford are also smooth contributors, as they each field their positions well and have a track record of being respectable power threats from the left side.

One would’ve imagined that the Giants would see the veterans slumping and the youngsters thriving. Ironically, the opposite is the case. Frankly, it’s probably the better swap because there’s upside in the players who are struggling at the plate.

The Giants have been progressing over the last two years and are giving a glimpse of what the near future could look like in the Bay Area with continued improvements. Their pitching, talent around the diamond and smooth veteran play are reasons to believe they can make a run at an NL Wild Card seeding.