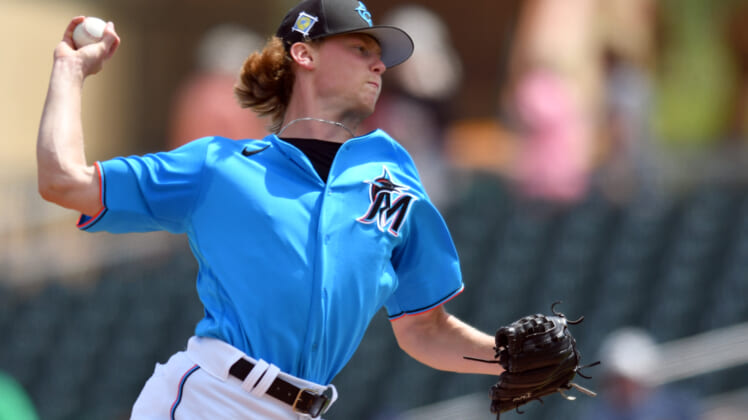 When the Miami Marlins drafted Max Meyer with the third pick in the 2020 MLB Draft, they knew the young righty could progress through the minors quickly to make his MLB debut. Now, it’s time to award the 6-foot righty the honor he has already earned.

Meyer joined the University of Minnesota after dominating high school competition in the state. After serving as a closer in his first season, recording 16 saves, the Golden Gophers moved him into the starting rotation. Despite his small frame, Meyer emerged as one of the top prospects in the 2020 MLB Draft.

The Marlins snagged him with the No. 3 pick, taking him both because of his ability to quickly progress through the minor leagues and his signability. After making a strong impression in spring 2021, Meyer was assigned to Double-A Pensacola and dominated.

Miami saw enough from its talented righty, promoting him to Triple-A Jacksonville before the end of the 2021 season. While he only made two starts, Meyer struck out 17-of-38 batters faced with only six hits and one earned run surrendered.

He earned an opportunity to prove himself in spring training, but the Marlins opted to keep him in the minor leagues once the regular season began. Once again, Meyer is proving to be far too good for his competition.

It’s not difficult to justify Miami’s reasoning for sending Meyer back to Triple-A Jacksonville to open the season. He only threw 10 innings at the level in 2021, not enough to demonstrate he was ready to handle a jump to the majors. After six starts, that should no longer be a question.

In his 2022 debut, Meyer struck out 5-of-16 hitters with two runs allowed. It left him with a 4.50 ERA, the worst mark on his record. It was still a respectable outing for a young pitcher in his first start of the season, but Meyer showed his real stuff in recent performances.

Eno Sarris of The Athletic uses data provided by MLB and some Triple-A teams to track pitching quality at both levels. Through six starts this season, Meyer is displaying better Stuff+ and Pitching+ than San Diego Padres starter MacKenzie Gore has.

Teams will often defend the decision to keep a young player down by pointing to a desire to see how that athlete responds after struggling. While there is some validity to that, because all young players will struggle in the majors, Meyer is simply too good for his competition right now.

It’s not like the Marlins can’t find an opening in their starting rotation. Trevor Rogers (5.00 ERA, 4.33 BB/9) and Elieser Hernandez (6.37 ERA) are struggling. Jesus Luzardo is wildly inconsistent, fluctuating between dominant outings and starts without command.

There’s no point in having Meyer use up his bullets against Triple-A competition. There were worries about his longevity with such a small frame. Even if those criticisms prove wrong, Miami is better off bringing him up and adding his arm to the pitching staff. If he struggles, then the Marlins can learn what he is made of and how he adjusts with the assistance of MLB coaching.