One year ago, Collin Sexton was the driving force of the Cleveland Cavaliers’ offense. In the present, he’s the odd man out. Sexton suffered a season-ending meniscus tear one month into the 2021-22 NBA season. Despite his absence, Cleveland finished the regular season 44-38, cracking the NBA Play-in Tournament.

Sexton is a restricted free agent this offseason and reportedly seeking a contract worth $18-22 million per season. Furthermore, Sexton’s former backcourt partner, Darius Garland, recently lobbied for his return.

Despite Garland and potentially the franchise’s wishes, the Cavs can’t re-sign Sexton.

The Cavs were one of the surprise teams in the NBA this season. Was Sexton previously an integral part of their operation? Of course, he was. No one scores 24 points per game, which Sexton did a season ago, by accident. The reality, though, is that the Cavs had an auspicious season without him.

With Sexton sidelined, Garland became the team’s primary ball-handler and had a breakout season. The latter became the team’s number one scorer, getting points off the dribble and from the perimeter, while serving as one of the better facilitators in the sport.

Midseason trade acquisition Caris LeVert served as an ideal complement to Garland, as the former is an attacking scorer who can stick mid-range jump shots. Meanwhile, head coach J.B. Bickerstaff has the most unique frontcourt in the NBA with three players who are 6-foot-10 or taller (Lauri Markkanen, Evan Mobley and Jarrett Allen).

The Cavs have a budding star in Mobley, who has a multidimensional offensive skill set. He finishes inside with ease, can put the ball on the floor and occasionally stretch the floor. Garland and Mobley are the focal points of this team.

Committing to Sexton, who would take away touches from Garland and Mobley, is a risk to said players’ development and the team building on its success this season.

Sexton would be a bizarre fit on the Cavs moving forward. The dollar bills attached to such a commitment would be just as puzzling.

Now, whether Sexton actually gets a $20 million salary coming off a torn meniscus and his team finding success without him remains to be seen. One way or another, though, he figures to attain an eight-figure salary given his scoring knack.

Cleveland can’t justify meeting Sexton’s asking price or even meeting him halfway. For starters, they’ll likely be extending Garland on a max deal this offseason given his breakthrough and importance to their offense. They also have Allen and Markkanen on the books for roughly $37 million per season and will have to pay Mobley top dollar if he makes a jump to stardom within the next two years. LeVert is a free agent after next season.

Now, the Cavs will have payroll flexibility in the summer of 2023. Kevin Love is entering the final season of a four-year, $120 million deal. While the big man was superb coming off the bench this season, his role doesn’t warrant a $30 million average annual salary.

With Love’s situation in mind, how can Cleveland pay Sexton $20 million per season to be a tertiary, off-the-ball scorer or sixth man? He’ll have an indefinite role in a game of fit.

The sign-and-trade is alive and well in the NBA, and Cleveland should use it to their advantage with Sexton. Now, they likely won’t get a starter or a player who’s a threat to score 20 points on a nightly basis in a sign-and-trade. At the same time, they can at least get something of value for Sexton.

Maybe they attain a young facilitator to backup Garland? Perhaps a sharpshooter? A former lottery selection in need of a fresh start? No matter the return, that player can be an instant member of the team’s rotation, providing “free” depth (in thought, Sexton wasn’t present this season). 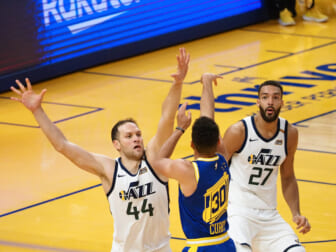 Cleveland’s offseason should be centered around establishing a second unit of capable starters and complementing Garland and Mobley. Garland is a well-rounded scorer who has been more impactful than Sexton.

While several factors contributed to their struggles, the Cavs went 60-159 with Sexton as their primary point guard. Now, Sexton could very well leave Cleveland, become a team’s starting point guard and make the Cavs eat crow. At this moment in time, though, it’s a larger risk for them to re-sign him.

Executing a sign-and-trade that sends Sexton elsewhere is the prudent play for the Cavs. Worst-case scenario, they lose him for nothing. Going from rotting at the bottom of the Eastern Conference to finishing with a winning record helps offset the bitter pill.