Kentucky’s TyTy Washington is one of the more subjective prospects in the 2022 NBA Draft in terms of where he’ll be selected. On one hand, the 6-foot-3 guard had a respectable freshman season at the University of Kentucky. Washington did a little bit of everything, scoring off the dribble, stretching the floor, moving the ball and holding his own defensively.

On the other hand, Washington was inconsistent and suffered a leg injury in the latter half of the season. He has the talent to be a top-10 pick but also the negatives to be the standout player available in the 20s.

Here are three ideal landing spots for Washington relative to where teams are selecting.

3. TyTy Washington to the Cleveland Cavaliers

Despite a discouraging finish to a breakout season, the Cavs have a foundation to build on. Now they need to add depth and complement their building blocks, Darius Garland and Evan Mobley. Washington is a compelling option for Cleveland.

Collin Sexton, who missed most of the 2021-22 season due to a torn meniscus, and Ricky Rubio, who suffered a torn ACL before being traded, are free agents. Washington becomes the first guard off head coach J.B. Bickerstaff’s bench. Leading the second unit, Washington can facilitate for others and force the issue at the rim.

Cleveland has the tallest frontcourt in the NBA, as Mobley, Jarrett Allen and Lauri Markkanen are all 6-foot-10 or taller. Late in games, the Cavs may want to go small and get another scorer on the floor. That player would be Washington, who can play off the ball and add quickness to the group on the floor.

All that said, the Cavs may prefer to re-sign veteran point guard Rajon Rondo and use the No. 14 pick on a forward.

2. TyTy Washington to the Atlanta Hawks

The Hawks didn’t envision losing in five games in the first round of the playoffs after reaching the Eastern Conference Finals in 2021. But that’s indeed what happened, and now they have to regroup. Washington would be a savvy addition to head coach Nate McMillan’s rotation.

Atlanta has several trade candidates due to younger players waiting in the wings, lofty contracts and the team needing to reshape itself as a whole. One way or another, Washington would make a difference for the Hawks on both ends of the floor given his length.

The Hawks have a lot of role-specific scorers (Kevin Huerter, Bogdan Bogdanovic and John Collins). Washington adds some offensive variety in that he can score off the dribble and hit both mid- and long-range jump shots. The Kentucky product could potentially work his way into the team’s starting lineup next to Trae Young, serving as a combo guard who can handle the rock when Young is off the floor.

Washington would be an impactful pickup for the Hawks. There’s just one team that needs Washington a little more.

The Wizards are in a funky spot. Bradley Beal, who’s reportedly likely to sign a new contract with the Wizards this offseason, is recovering from a wrist injury, and the Wizards have a raw roster from previous trades. At the same time, many of those players, specifically Kristaps Porzingis and Kyle Kuzma, come with a considerable amount of intrigue. Washington provides even more intrigue.

At face value, the Wizards have a lot of scorers and a deep roster in general. It’s a matter of them getting on the same page and clicking at the same time. Point guard is a gaping need, which Washington addresses. He and Beal would presumably split ball-handling duties and complement each other.

Beal tends to be an aggressive scorer off the dribble. While Washington can be the same, he also has an outside game, which can help stretch the floor for Beal. A dynamic backcourt accompanied by a great deal of frontcourt ammunition (Porzingis, Kuzma, Rui Hachimura, Daniel Gafford and others) makes for a high-octane offense.

Washington is a justifiable pick at No. 10 and has the surroundings to prosper with the Wizards. This combination could get them back in the Eastern Conference mix. 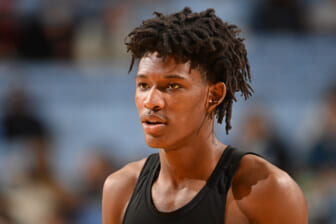 Also Read:
2022 NBA Draft: Terquavion Smith projected to be a first-round pick, returns to college instead