Blake Wesley showcased an ability to be a leading scorer in his lone season at Notre Dame. The 6-foot-5 Wesley displayed the skill set of a combo guard. He found success attacking the rack while also getting up a lot of perimeter jump shots.

Wesley is a talented scorer, but he has to become more efficient at the next level. He likely begins his NBA career coming off a team’s bench, where he can get into a groove and sharpen his game.

Here are three ideal landing spots for Wesley relative to where teams are selecting.

3. Blake Wesley to the Charlotte Hornets

The Hornets have to find a head coach, agree to a new contract with Miles Bridges and figure out Gordon Hayward’s future with the franchise. They also have two first-round selections (13 and 15) in the 2022 NBA Draft. Wesley would be a respectable pick at either spot.

As it concerns their roster, the Hornets’ offseason should be centered around getting more frontcourt depth and adding another guard for their backcourt rotation. Wesley would be instant offense off the bench. Potentially growing into the team’s backup point guard, Wesley would be a vital bench scorer.

Wesley’s ability to score in bursts can help pick up where the likes of LaMelo Ball and Terry Rozier leave matters in the starting five. Wesley, James Bouknight, Cody Martin (if re-signed) and Jalen McDaniels would make for a compelling second unit.

All that said, Wesley would be more of a great value than a great fit for the Hornets, as they have plenty of players who can score off the dribble.

2. Blake Wesley to the Cleveland Cavaliers

Cleveland’s 2021-22 season went down in flames, as they went from the third seed in the Eastern Conference midway through the season to being eliminated in the Play-in Tournament. Objectively speaking, they have players to build through (Darius Garland and Evan Mobley) and need to complement their respective skill sets. Wesley is an enticing option for Cleveland.

The Notre Dame product would be the Cavs’ leading scorer off the bench, giving them someone who forces the issue and occasionally stretches the floor. Furthermore, Cleveland will likely have a void to fill in its second-string backcourt with Collin Sexton a free agent and Ricky Rubio being part of the team’s midseason trade for Caris LeVert.

Wesley gives Cleveland another starting-caliber player who can create his own shot out on the perimeter. Such an ability is somewhat lacking in their rotation outside of Garland and LeVert.

The factor that could stop the Cavs from selecting Wesley, though, is them preferring to draft a true point guard to backup Garland.

Six months ago, the Pelicans’ rebuild looked dead in the water. Now, it has life and could potentially see the franchise compete for the Western Conference playoffs next season. Wesley would be a savvy selection for New Orleans at No. 8.

New Orleans has depth across the board, but they don’t necessarily have a backcourt scorer in their second unit. Jose Alvarado and Herbert Jones are scrappy defenders. Trey Murphy III stretches the floor with his outside shooting. Larry Nance Jr. and Jaxson Hayes get points in the paint through their athleticism.

Wesley will be the player who leads the charge for head coach Willie Green’s second unit. The former will attack the rack, get to the free throw line and create clean looks for others. Maybe Wesley develops a more reliable perimeter game in a rotation role?

A team aspiring to win the West can’t have enough scoring. Plus, Zion Williamson’s standing with the Pelicans’ organization and troubling list of injuries cloud his future. Wesley gives the Pelicans another scoring option who can start in a pinch. He fills a void and adds a new dimension to a budding bench corps. 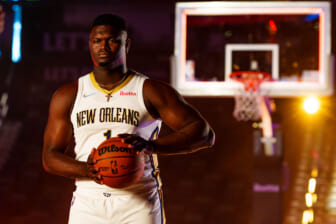