Who Won the LeSean McCoy Trade?

By pure name recognition alone, the Buffalo Bills have reportedly acquired a star in the form of running back LeSean McCoy from the Philadelphia Eagles. And McCoy’s production speaks for itself. He has put up over 3,600 total yards and 16 touchdowns over the past two seasons.

Heading to Philadelphia in this deal is former second-round pick Kiko Alonso, a linebacker that missed the entire 2014 campaign due to an injury.

While we sit back and realize that Philadelphia sent an All-Pro running back to Buffalo for a young linebacker coming off an injury, it would be easy to call this deal a major win for the AFC East team.

Looking further into it, that’s simply not the case.

The first point that needs to be mode is just how undervalued the running back position is in today’s NFL. In many ways, it is seen as a dime a dozen. If a team is able to implement a good scheme and possesses a solid offensive line, even an average running back can put up stellar numbers. At least, that’s the perception around the league.

Only eight running backs around the NFL boast an average annual salary of over $5 million. 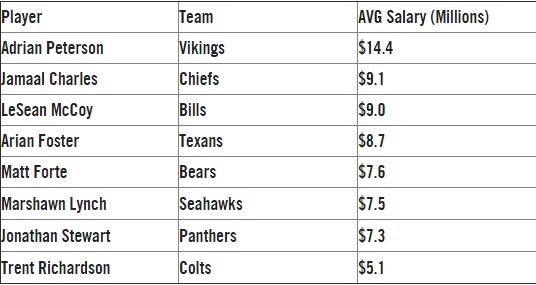 With the devaluation of running backs comes an increasing unwillingness from teams to pay players at this position. That’s evidenced by this year’s salary cap figures, which takes into account the five highest-paid players at each position and averages them out. At $10.591 million this year, the running back position ranks behind seven other positions in terms of franchise tag numbers. In fact, McCoy’s average annual salary of $9 million ranks third among active running backs. His cap hit of $10.25 million next year also ranks just second behind only Adrian Peterson.

For a team like the Eagles who rely more on scheme than individual players, it made little sense to pay a running back that type of money moving forward. Call it Chip Kelly’s ego of whatever, but it’s a deal that made perfect sense for the Eagles. This is only magnified by the fact that the running back market in both free agency and the draft is flush with talent. From DeMarco Murray and C.J. Spiller on the open market to Melvin Gordon and Todd Gurley in the draft, Philadelphia possesses ample options to replace McCoy—options that are both cheaper and younger than the former Eagles running back. 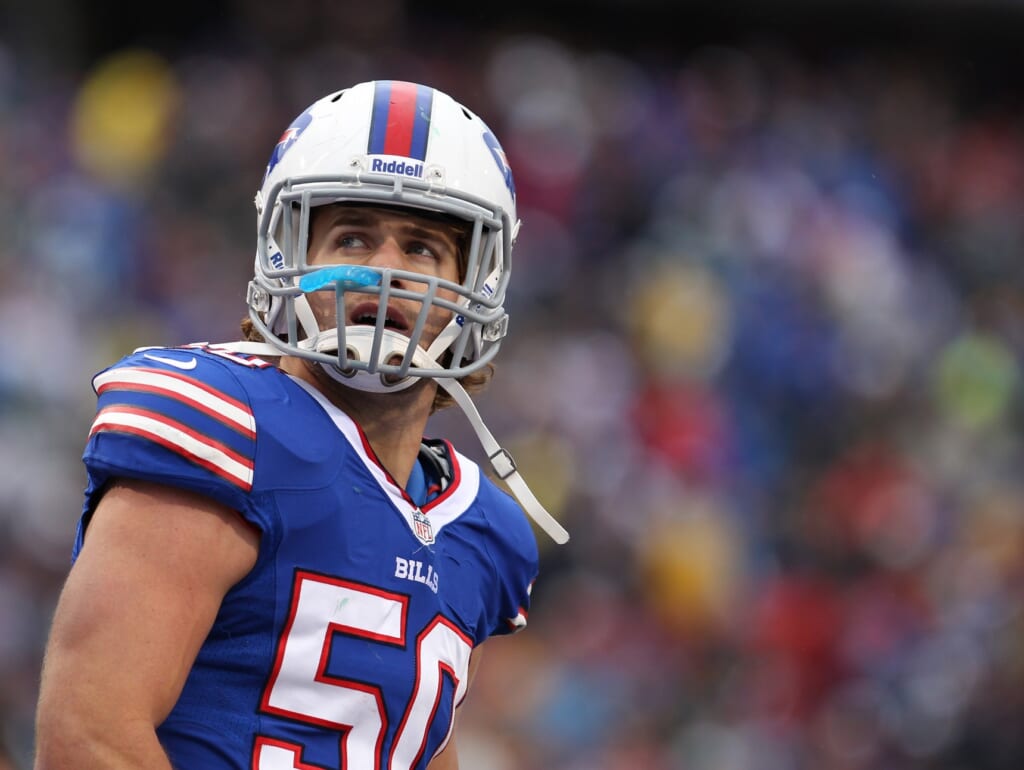 Courtesy of USA Today: If Alonso can return to 2013 form, the Eagles will have a consistent Pro Bowl linebacker.

Lost in the mix is the fact that Philadelphia acquired one of the best young linebackers in the NFL. Prior to tearing his ACL before the 2014 season, Kiko Alonso put up one of the better rookie campaigns for a player at his position in the recent history of the NFL back in 2013. According to Pro Football Focus (subscription required), Alonso graded out as the ninth-best inside linebacker in the entire league as a rookie. In addition to this, he ranked second behind Derrick Johnson in coverage. That’s an absurd performance considering young linebackers tend to struggle in coverage.

Acquiring someone of Alonso’s caliber is going to be absolutely huge for an Eagles linebacker group that already includes an up-and-comer in the form of Mychal Kendricks. It also takes a weakness and makes it a huge strength heading into the 2015 campaign.

In looking at the Bills side of things, it’s easy to make sense of what they are attempting to do here. New head coach Rex Ryan has always valued a strong running game. This is only magnified by the presence of Greg Roman at offensive coordinator. Roman led one of the strongest rushing attacks in the NFL with the San Francisco 49ers over the past four seasons. He was also the run-game coordinator for Jim Harbaugh at Stanford. Roman’s run-blocking schemes are right up there among the most innovative in the NFL. And while he leaves a lot to be desired as an in-game play caller, the veteran coach will get the most out of McCoy.

It’s common logic to believe that the three-time Pro Bowler will be successful in Western New York. Everything is in place for McCoy to put up a huge 2015 campaign.

The interesting dynamic here is that Buffalo is replacing C.J. Spiller with McCoy. While it’s obviously an upgrade, we can’t automatically assume McCoy is going to take this offense to the next level. There are still major issues here, especially at quarterback. With Kyle Orton now retired, the only viable quarterback on the roster is E.J. Manuel, who the team benched early last season. McCoy is a huge piece, but the Bills need to do more in order to improve upon a horrible offensive performance in 2014. 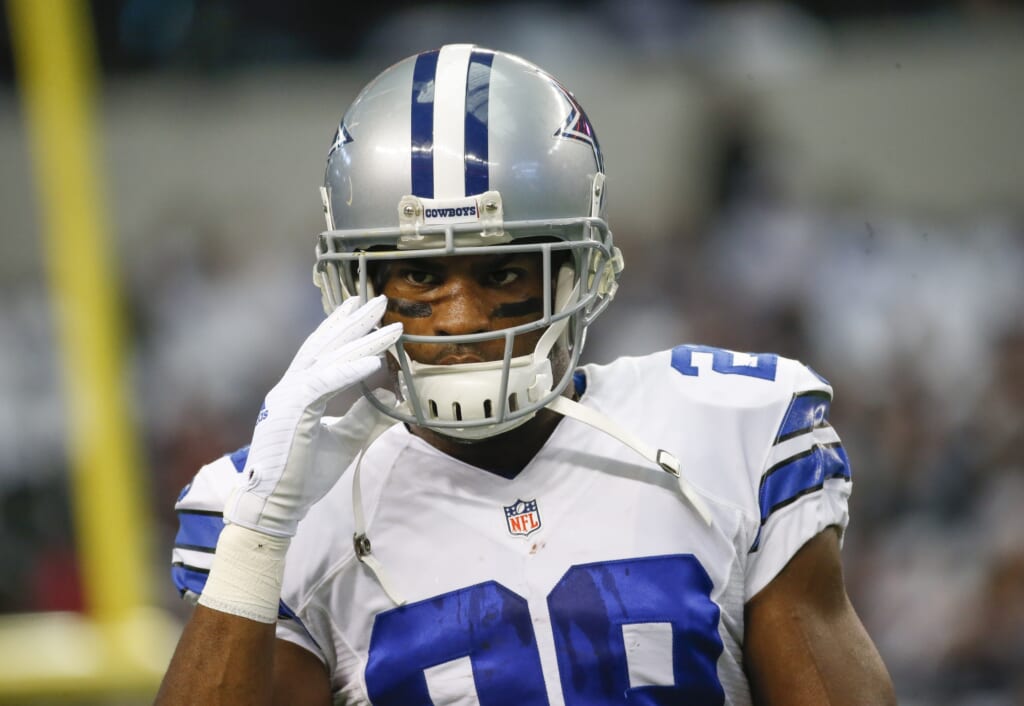 Courtesy of USA Today: Why didn’t Buffalo just hit the free agent market for a RB?

Then you have a running back market that must be analyzed here. Buffalo could have made a play for someone like DeMarco Murray without having to give up a Pro Bowl caliber linebacker. It could have done so without paying any more than the $24-plus million that McCoy is set to earn over the next three seasons. That doesn’t even factor into the equation lesser options including: Frank Gore, Ryan Mathews and Mark Ingram.

In terms of value, the Bills simply didn’t provide themselves with much in this trade. They take on a huge contract at a position that isn’t valued in the NFL today. They do so at the cost of a great young linebacker. And they do so still in need of a quarterback to actually help shoulder the load on offense.

Once this deal is made official on March 10th, Philadelphia will add over $9 million to its already bloated salary cap room. Meanwhile, the Bills cap is obviously headed in the opposite direction.

Based on all these factors, it’s safe to draw the conclusion that Philadelphia won this deal hands down. It’s now going to be interesting to see what each team does entering free agency. That should tell us the real winner of this blockbuster trade.