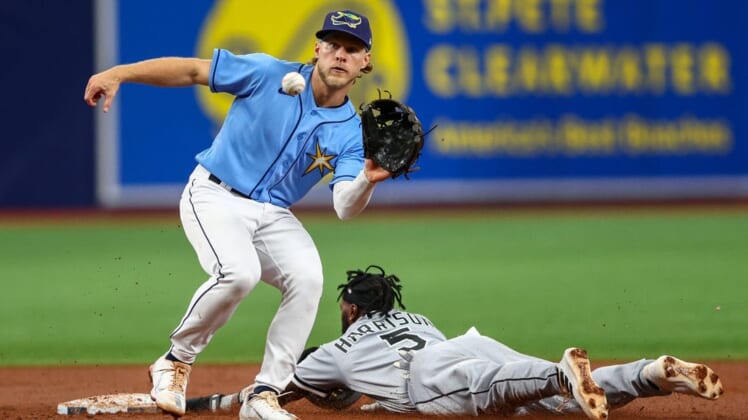 Jake Burger and Andrew Vaughn combined for four doubles and three RBIs as the Chicago White Sox held on to defeat the host Tampa Bay Rays 6-5 on Sunday in St. Petersburg, Fla.

Burger and Vaughn each had two doubles, while Burger knocked in two runs and Vaughn one. Vaughn finished 3-for-5 to raise his batting average to .298 for the White Sox, who had 16 hits. Left fielder AJ Pollock was the only Chicago starter without a hit.

The White Sox scored four runs in the first inning and two in the second to take a 6-0 lead and chase Tampa Bay starter Ryan Yarbrough (0-3) after 1 2/3 innings. Yarbrough gave up eight hits while walking two. He did not record a strikeout.

Burger continued his hot streak after hitting a two-run, pinch-hit home run in Saturday’s 3-2 victory. With Burger and Vaughn helping to ease the offensive absence of All-Star shortstop Tim Anderson, who is out with a groin injury, the Wite Sox won their second straight game after losing four in a row.

Chicago starter Lucas Giolito (4-2) cruised into the fifth inning with the 6-0 lead but allowed a leadoff solo 410-foot home run to Isaac Paredes.

The Rays crawled back to within a run in the sixth. Yandy Diaz opened with an infield single, and Ji-Man Choi reached base when Yasmani Grandal, playing first, couldn’t handle a throw from shortstop Danny Mendick. Grandal was charged with an error.

A Harold Ramirez sacrifice fly drove in Diaz, and Randy Arozarena followed with an RBI triple to score him. Mike Zunino hit a two-out, two-run homer that traveled 364 feet to make the score 6-5.

Giolito was charged with all five runs, two earned. Liam Hendriks pitched a perfect ninth to post his 16th save of the year. He had one strikeout.