What we learned from Bucks-Raptors Game 4 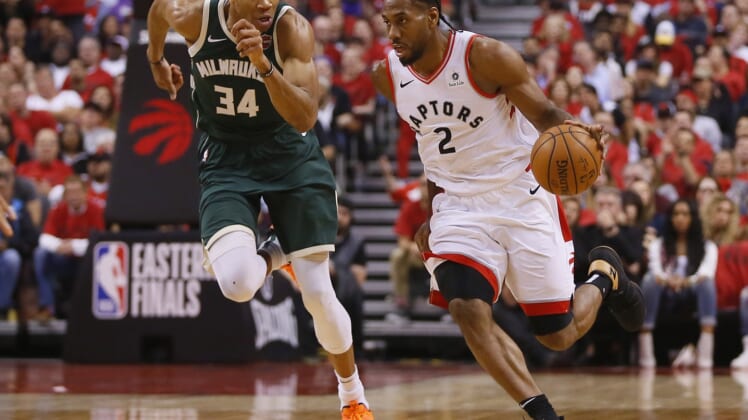 The Milwaukee Bucks attempted to take a commanding 3-1 series lead over the Raptors in Game 4 of the Eastern Conference Finals in Toronto Tuesday evening.

It did not go according to plan. Even with Raptors star Kawhi Leonard struggling with both fatigue and injury, Toronto came out on top by the score of 120-102.

This win evens the series at two heading into Game 5 Thursday evening in Milwaukee. Here’s what we learned from Toronto’s series-tying win.

Kawhi Leonard is nowhere near 100%

After being seen hobbling throughout Game 3, Leonard proclaimed himself to be completely healthy. Most sensible people figured that was nothing more than the All-Star underplaying the injury.

As Game 4 got going, it became clear Leonard wasn’t near full health. He didn’t have the same bounce off the dribble, a clear indication that the forward’s leg was indeed bothering him. In the end, Leonard went for 19 points on 6-of-13 shooting, including this dunk on Giannis Antetokounmpo. He played well. But he’s not 100%.

Despite losing Game 3 Sunday night, the combination of Malcolm Brogdon and Eric Bledsoe went for 31 points, nine rebounds and six assists. With Bledsoe struggling to shoot (3-of-16 Sunday), most figured Brogdon would continue to step up.

That didn’t happen. The former NBA Rookie of the Year hit on his first field goal late in the third quarter after missing his first seven shots. Overall, Brogdon went for four points on 2-of-11 shooting. Meanwhile, Bledsoe’s shooting slump continued. He connected on just 2-of-7 shots.

Head coach Nick Nurse decided to go with a smallish eight-man rotation in Game 4, something we’ve seen throughout the playoffs. But unlike what we’ve seen recently, this unit stepped up big time.

Norman Powell went for 18 points on 4-of-13 shooting from distance. Toronto was plus-29 in the 32 minutes he played. This came after Powell contributed big time in the Raptors’ Game 3 win. Meanwhile, a struggling Serge Ibaka scored 17 points and grabbed 13 rebounds. Fred VanVleet also added 13 points and was plus-25 in as many minutes. It’s the first time all series that Toronto’s bench outplayed the Bucks’ second unit.

This former All-Star entered Tuesday’s action averaging 17 points and seven rebounds over the past three games. He’s one of the major reasons the Bucks came out on top in Game 1 of the series.

Unfortunately, the center just didn’t have it in Game 4. He scored just eight points on 3-of-5 shooting, including 2-of-3 from distance. Lopez’ performance is one of the primary reasons Toronto tied the series up at two.

Giannis Antetokounmpo must be more aggressive

It’s hard to criticize the Greek Freak’s game after how he started out Tuesday evening. Even then, Giannis simply needs to be more aggressive on offense. In no world should the MVP candidate take just two more shots than Khris Middleton.

In the end, Antetokounmpo connected on 11-of-15 shots for 25 points while adding 10 boards and five assists. That’s not a bad stat line. Instead, it’s the fact that seven of Giannis’ 15 shots came from beyond the three-point line. Moving forward, he needs to be more aggressive.

A win for the Warriors

The five-time defending Western Conference champs are going to have nine days off between them eliminating the Portland Trail Blazers Monday night and Game 1 of the NBA Finals on May 30. That’s etched in stone after the NBA released its schedule for the championship round.

Even then, the Warriors would benefit big time from this series going the distance. By winning Game 4, Toronto guaranteed a Game 6 on May 25. If the series were to go the full seven, the winner would have only two days off before Game 1 of the Finals. That’s a win for the Warriors.