What has gone wrong for Miami Heat vs. Milwaukee Bucks

The Miami Heat have struggled at the most important time of the year against the Milwaukee Bucks. What has gone wrong for the Heat during the first two games?

The Miami Heat currently sit at an 0-2 deficit as they go back home for Game 3 on Thursday night. The Milwaukee Bucks barely squeaked away a win in Game 1 and blew the Heat out of the gym in Game 2.

Miami has struggled in ways many people did not expect. Jimmy Butler hasn’t looked like himself, Bam Adebayo hasn’t been great on offense, and Trevor Ariza isn’t living up to unrealistic standards set by Jae Crowder.

What has gone wrong for the Heat, and are their issues fixable in this series? 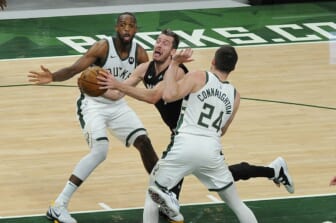 The Miami Heat are struggling with rebounding

Miami only totaled 36 rebounds in Game 2, while Milwaukee had 61 boards overall. The Heat’s poor offense also contributed to the Bucks winning the rebounding battle handily.

Only one Heat player brought down more than five rebounds and that was Dewayne Dedmon, who played 21 minutes off the bench. However, this is also due to Milwaukee shooting lights out from beyond the arc.

Bam Adebayo and Dedmon were on the court together, which would help with rebounding the ball and defense when they do play together. However, the Heat need Dedmon’s contribution off the bench due to Precious Achiuwa being the other big man.

There is nothing the Heat can do to solve their frontcourt rotation issue until the offseason, but they need to find a quick fix for now. If not, Miami won’t be advancing in the NBA Playoffs.

Jimmy Butler has surprisingly struggled in both games the Miami Heat have played in the 2021 NBA Playoffs. Butler has averaged 13.5 points, 6.0 rebounds, and 6.0 assists in those contests.

The 31-year-old superstar hasn’t looked “stupidly locked in” like he proclaimed before the NBA Playoffs began on Saturday afternoon. Butler has made bad decisions on offense, which is uncharacteristic of him.

Perhaps, the Bucks have found a way to compress Butler on offense, but he still had open looks in Game 1 that he didn’t convert in a 4-of-22 shooting performance.

There’s no excuse for the player who went toe-to-toe with LeBron James in the NBA Finals last season. Butler has done it before, so there’s no reason why he can’t do it again.

The Heat are going to need him to step up in Game 3. The season and current structure of Miami moving forward rest on Butler’s shoulders.

The Heat’s offense has not been that good over the past two games. Outside of their 20 made 3-pointers in Game 1, nothing else has been working for Miami.

They shot 36.4% as a team from the field in Game 1 and improved to 40.2% in Game 2. Neither number is going to be good enough if they want to beat the Bucks in a seven-game series.

No matter what team you are, if your best player isn’t playing well, there’s almost no shot at winning anything in the NBA when it comes down to the wire. This has been the case for Miami in both games.

Butler and Adebayo had extremely difficult performances in Game 1 and there was no chance for them in Game 2 to prove themselves due to the Bucks having an insane amount of shots fall during the game.

Looking at the NBA bubble from last season, all four of the conference championship teams haves struggled and suffered major injuries at one point or another.

Perhaps the shortened offseason has been very impactful on each team, Miami included. This cannot be ignored since there are signs of this possibly being an issue.

As stated previously, the future of this Heat build could be dependent on Game 3. If they lose at home and go down 0-3 in the series, there’s a strong likelihood that you’ll see many changes outside of Butler and Adebayo.

Game 3 isn’t just for this season — it’s for what lies ahead as well. The Heat need to fix these issues fast, because there’s no way they’ll prevail against these Bucks if they can’t markedly improve.