Khris Middleton’s pull-up jumper with 0.5 seconds left in overtime lifted the host Milwaukee Bucks to a 109-107 victory over the Miami Heat in Game 1 of their Eastern Conference first-round series on Saturday afternoon.

The Heat had one final chance after Jimmy Butler took the inbounds pass from Goran Dragic, but could not get his shot off thanks to tight defense from Jrue Holiday as time expired.

Holiday was one of the key acquisitions this offseason for the Bucks, who are seeking payback against Miami for last year’s second-round playoff defeat in five games. He finished with 20 points, 11 rebounds and three steals.

Dragic, who led the Heat with 25 points on 10-for-17 shooting, tied the game with a 3-pointer with 20.6 seconds left in the extra period.

Butler struggled mightily from the field, shooting 4-for-22, but sent the game to overtime tied at 99 when he drove past Antetokounmpo and made a layup as time expired in regulation.

Brook Lopez finished with 18 points and eight rebounds and made one of two free throws to break a 104-104 tie with 1:04 left in the extra period. Holiday’s ensuing fast break layup off a Duncan Robinson missed 3-pointer gave the Bucks a three-point lead with 39.3 seconds left in overtime.

Robinson’s 24 points on 7-of-13 shooting from 3-point range helped the Heat keep pace despite some early shooting struggles in a game which had 17 lead changes. Neither side led by more than eight points. 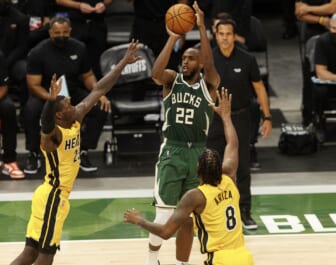 Kendrick Nunn and Tyler Herro each had 10 points for the Heat while Trevor Ariza finished with 12 rebounds and eight points. Bam Adebayo also had 12 rebounds, but was held to nine points on 4-of-15 shooting.