What are the Los Angeles Lakers’ biggest playoff weaknesses? 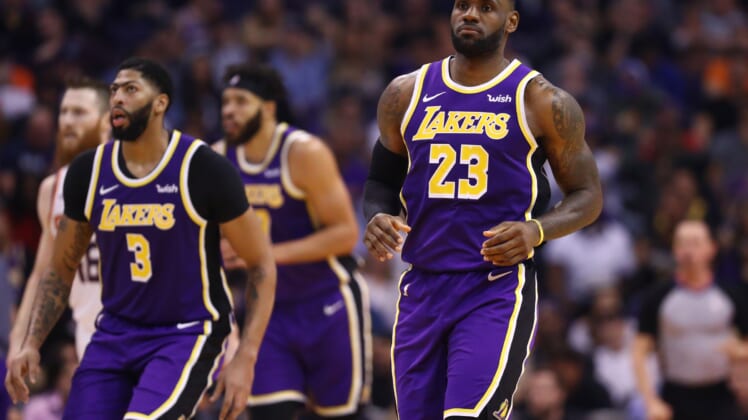 Prior to the postponement of the NBA season, the Los Angeles Lakers were riding high as the best team in the West. The four-month break provided the Lakers valuable rest they wouldn’t have gotten as they look to win their 17th championship.

The big picture: With a rested Los Angeles Lakers sitting atop the Western Conference, that begs the question: what are the Lakers’ weaknesses?

The Los Angeles Lakers’ age is a factor

As it stands, the Lakers have the third-oldest roster in the NBA at 28.3 years old. The Lakers have decided to surround their 27-year-old star Anthony Davis with playoff-hardened, veteran players over 30 such as:

On top of that, the Lakers still have the ultimate trump card in 35-year-old LeBron James, who seems to be doing his best to stave off Father Time. Regardless of his age, James can get it done when called upon, especially during clutch situations.

Considering the Lakers’ age, the break could have helped the Lakers get the rest they needed before the playoffs. They could have more energy in crunch time, which is key since most of the Lakers’ best players are over 30.

Will the layoff help LeBron James?

Due to COVID-19, all sports leagues were either cancelled or postponed. Additionally, because training facilities were closed for safety reasons, who knows how the players will react to game play, even with about a month for players to get back into game shape.

For reference, the break caused by 2011 NBA Lockout caused more than nine injuries per day, up from the 7.3 in years prior. Though some players trained during the break, it’s one thing to be “in shape” and it’s another to be in “game shape.”

Plus with multiple GM’s “terrified” about the NBA’s return, there is definitely more on the line than who lifts up the championship at the end of the season. That is why NBA Commissioner Adam Silver has even suggested that the pandemic could cause the season to be suspended again.

That said, the break could have helped James feel more refreshed for the restart. Typically, James takes a few days/weeks off near the end of the season to recharge for the playoffs. Because of the pandemic, James got the rest he needs without having to sit out multiple games. That can only help the Lakers moving forward.

Though the Lakers are well-rested, something to look out for is how the team will gel with its new additions. Before the break, the Lakers had a solid rotation with Avery Bradley and slowly integrated the aforementioned Morris.

Now, the Lakers added Dion Waiters and James’ former teammate J.R. Smith after Bradley chose to opt out of the restart. As both Waiters and Smith are confident shooters, it remains to be seen how the two will mesh with James and each other.

While Waiters has never played with James before, Smith has. His experience with James could prove beneficial in the long run. Smith also infamously dribbled out the clock in Game 1 of the 2018 NBA Finals, a moment James undoubtably remembers.

Nevertheless, it’s doubtful that either player gets extended minutes, especially considering Alex Caruso is a better replacement for Bradley.

The Bottom Line: The Lakers’ biggest weakness is chemistry

In all, the break could have been a blessing in disguise for the Lakers. With the third-oldest roster, the Lakers needed all the help they can get in the pursuit of their 17th championship.

That said, with all the new pieces, that could perhaps be their downfall. Be that as it may, Waiters and Smith have not played a game in some time. It’s only a matter of time before the Lakers see what sort of shape they are in. More than anything, it seems like both players were signed as an insurance policy.

Chemistry issues notwithstanding, if all goes well for the Lakers, expect them to be lifting their 17th championship in mid-October.