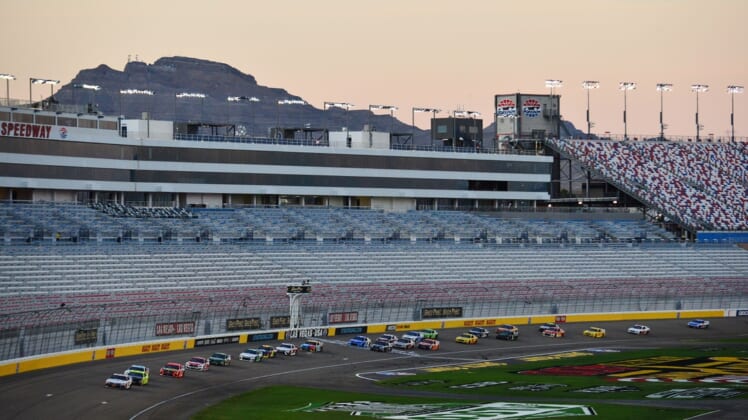 There have been two first-time race winners in Daytona 500 champ Michael McDowell and Daytona Road Course winner Christopher Bell. Although Byron, 23, is a former race winner competing for an elite team, many NASCAR fans would not have predicted these three would hoist a trophy before any of last year’s championship-contending drivers. Byron’s win was his only top-20 finish this season.

It has all intensified a must-see 2021 that – judging by historical statistics – will crown a fourth different winner this week in the Pennzoil 400 Presented by Jiffy Lube at Las Vegas Motor Speedway (3:30 p.m. ET on FOX, PRN and SiriusXM NASCAR Radio).

Last year’s Championship 4 – Chase Elliott, Denny Hamlin, Brad Keselowski and Joey Logano – are still looking for their first victory of this season. And neither Hamlin nor the 2020 NASCAR Cup Series champion Elliott have ever won at Las Vegas.

Team Penske drivers Keselowski and Logano have been particularly good at the 1.5-miler, winning three of the last five races. Logano is the two-time defending winner of the spring race.

Logano, driver of the No. 22 Team Penske Ford, has only one top 10 this season despite leading laps in all three of the season’s races. He was leading when he crashed in the season-opening Daytona 500, finished runner-up at the Daytona Road Course and then 25th last week at Homestead. He has top-10 finishes in nine of the last 10 Las Vegas races and led laps in all 10.

A trophy would go a long way to making Logano’s results more reflective of his performance this year. Statistically, Las Vegas is the 2018 NASCAR Cup Series champion’s best track. He has an average finish of 8.4 in 15 starts.

His Team Penske teammate, Keselowski, is the winningest active driver at Las Vegas with three victories, the most recent coming in the 2018 playoff race. He finished runner-up to Logano at Vegas in 2019 and has 10 top-10 finishes in the last 11 Las Vegas races.

For the 2021 season, however, the 2012 series champion has only one top-10, but was making a move for the race win in the Daytona 500 when he was involved in a last-lap crash. He led 47 laps at Homestead last week and finished 16th.

Hamlin, who won seven races in 2020, has been close to Victory Lane and a favorite at each 2021 stop. He leads the championship standings by 20-points over Kevin Harvick. He finished fifth in the Daytona 500 and third at the road course the following week but was 11th at Homestead – the only race this season when he has not led a lap. In 18 Las Vegas starts he has only three top-five finishes. His best effort is third and he’s done that twice, including last year’s Playoff race.

Elliott, who finished runner-up in the Daytona 500, is looking for his first top-10 since. He was 21st at the Daytona Road Course after leading 44 of the 70 laps and 14th at Homestead last week. His best finish (third) at Las Vegas came in his last race there in the midst of his title-clinching playoff run.

“I thought we were pretty good at Las Vegas last year in the spring race,” Elliott said. “We struggled a little bit in the fall, but there are certainly some things we can learn and take from both of those races. I think more importantly, we can take the things we saw at Homestead last Sunday, where we need to improve and apply those to this weekend.”

Stewart-Haas Racing’s Kevin Harvick is a two-time Las Vegas winner. The 2014 NASCAR Cup Series champion joins McDowell as the only drivers with top-10 finishes in all three races this season. He turned in dominating performances in both his Las Vegas wins – leading 142 laps in his 2015 victory and leading 214 of 267 laps in his 2018 win. He’s on a four-race streak of top-10 finishes and has led 277 laps in that time at Las Vegas.

Martin Truex Jr., also a two-time Las Vegas winner, is another easy favorite. The 2017 NASCAR Cup Series champion has only a single top-10 finish in the No. 19 Joe Gibbs Racing Toyota so far this season, however, but has six top-10 finishes including his two victories in the last seven Las Vegas races.

In addition to these traditional favorites, there are several others that make a good case for victory. Two-time series champion, Joe Gibbs Racing driver Kyle Busch is an obvious pick. The Las Vegas native has won at the track in all three NASCAR national series. His older brother Kurt Busch won the most recent race at Las Vegas, last season’s playoff race.

Three different winners – including two first-time winners – in the opening three races has certainly set an exciting pace for the 2021 NASCAR Xfinity Series season. And with only one former Las Vegas winner in this week’s field, Saturday afternoon’s Alsco Uniforms 300 (4:30 p.m. ET on FS1, PRN and SiriusXM NASCAR Radio) is shaping up to be another thrilling chapter in a compelling early season of competition.

Myatt Snider became the second first-time race winner this season and will come to the second 1.5-mile challenge of the year at Las Vegas feeling very confident. Snider will start on the pole position alongside Xfinity driver standings leader Austin Cindric for Saturday’s race. Judging by recent history, there are no clear-cut favorites but a lot of legitimate contenders.

It’s an interesting championship picture already with defending series champ, Cindric, leading the way in the standings with three top-five finishes in three races, including the season-opening victory at Daytona. He was runner-up to Briscoe last February at Las Vegas and finished sixth in September, leading 49 laps in those two races.

Daniel Hemric (Joe Gibbs Racing) and Jeb Burton (Kaulig Racing) – both in new rides for the 2021 season — are ranked third and fourth in the Xfinity driver standings coming to Las Vegas. Hemric, 30, has three top 10s and two top 5s already and is still looking for his first victory in one of NASCAR’s three top divisions. Burton, 28, has three top-five finishes this year – already establishing himself a viable championship contender in his first fulltime opportunity in the series.

There are a couple of other title contenders on the other side of fortune early in the season.

Noah Gragson, driver of the No. 9 JR Motorsports Chevrolet, is widely-regarded a title favorite, but he’s had a lot of misfortune in the early-going and is still looking for this first top-20 finish of the year as he comes to his hometown Las Vegas track. Gragson has crashed out of two of the three races this season – including as the race leader last week at Homestead. His best – and only – race finish is 28th on the Daytona Road Course.

Las Vegas has been a fantastic venue for the 22-year-old Gragson. However, his 3.8 average finish is second-best among all the tracks. He was fourth and second in the two races here last year.

Justin Allgaier, Gragson’s veteran teammate at Junior Motorsports, is also looking to turn things around. The 34-year-old perennial championship contender is also still looking for his first top 20 of the year – a highly uncharacteristic start that includes a pair of DNFs (at the Daytona season-opener and at Homestead). His best finish is 26th at the Daytona Road Course.

As with his teammate Gragson, Allgaier has turned in promising runs at Las Vegas even if he hasn’t hoisted a trophy there yet. He has 11 top-10 finishes in 13 starts, including two runner-up efforts. He has finished eighth or better in the last three races at Las Vegas, including eighth and fourth last year.

After an off-week to regroup, the NASCAR Camping World Truck Series returns to action as the series heads West for Friday night’s Bucked Up 200 (9 p.m. ET on FS1, MRN and SiriusXM NASCAR Radio).

ThorSport Racing driver Ben Rhodes comes to Las Vegas having swept the season’s first two races at Daytona Beach, Fla. And he is one of only four current full-time competitors to have won at the 1.5-mile track previously.

In fact, a then 20-year-old Rhodes won is career first series race there in 2017 – edging Christopher Bell to the checkered flag by .066-seconds. He will start on pole Friday night alongside 2020 series champion Sheldon Creed, runner-up to Rhodes at the last race – the Daytona Road Course.

Creed, who has four top-10 finishes in four Vegas starts – was also the second-place finisher the last time the series raced at the track in September. He led a race best 89 of the 134 laps but finished second to Austin Hill.

Hill would love to find his 2021 groove this weekend in Vegas, which will be his 100th series start. The Hattori Racing Enterprises Toyota driver has won two of the last three races there and is one of only three drivers in history (also Jack Sprague and Kyle Busch) with multiple Las Vegas wins. But he’s had a slow start to this season and is still looking for his first top-20 finish. He finished 22nd on the Daytona superspeedway and 33rd on the road course.

The Vegas high banks have been a strength for Hill – those two wins are a third of his six-win career total. In the last three races, he has won twice and finished third. He will have his work cut out this weekend with a 31st-place starting position.

Kyle Busch, the defending race winner at his hometown track will start 29th.

“We’ve had extremely fast Tundras every time we’ve gone to Las Vegas and have had a ton of success,” Hill said. “This is the same truck that we won with in 2019 and ran third with last Spring. Hopefully we can have a similar result on Friday night. We didn’t get the results we wanted in the first two races at Daytona, but every one of us is looking forward to turning that around this week and hopefully we can get our Ibaraki Toyopet Toyota into Victory Lane for the first time this season.”

What To Watch For:

What to Watch For:

What to Watch For: