Wazzu rallies to defeat Idaho in Battle of the Palouse 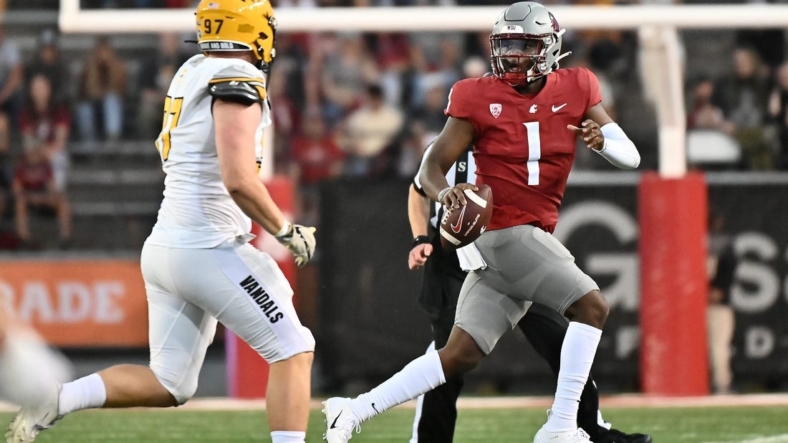 Cam Ward threw for 215 yards and three touchdowns, and Nakia Watson rushed for 117 yards to lead host Washington State to a 24-17 win over Idaho on Saturday at Pullman, Wash.

Washington State won the Battle of the Palouse rivalry game in a series that started in 1894 after overcoming a 10-0 deficit late in the second quarter. The Cougars lead the series 73-16-3.

Ward, who transferred to Wazzu from Incarnate Ward after passing for 4,648 yards and 47 touchdowns last season, completed 25 of 40 passes against Idaho. He did not throw an interception.

Gevani McCoy completed three passes for 52 yards in the ensuing drive but his pass from the Washington State 28 with 12 seconds left was intercepted by Daiyan Henley a yard in front of the end zone.

McCoy completed 21 of 32 pass attempts for 212 yards, with two interceptions and a touchdown.

Ward’s 13-yard touchdown pass to De’Zhaun Stribling with 8:17 left in the third quarter gave Washington State its first lead of the game, 17-10.

Both offenses struggled to start the second half. Idaho punted three times and turned the ball over on downs, and Washington State was forced to punt twice and also fumbled the ball away.

Former Washington State defender Fa’Avae Fa’Avae forced the fumble by Watson and Devante Keys recovered the ball at the Cougars 48. In the Vandals’ ensuing possession, McCoy was sacked for a loss of 14 yards by Jordan Lee and Armani Marsh on fourth-and-9.

The Cougars took over. After a pass-interference call moved the ball to the Idaho 24, Ward completed three consecutive passes, including an 8-yard scoring strike to Jaylen Jenkins to give the Cougars a 24-10 lead with 10:33 left.

Idaho’s offense came alive with an eight-play, 75-yard drive that culminated with a 23-yard touchdown pass from McCoy to Jordan Dwyer with 6:05 remaining that cut the lead to 24-17.